“what I feel is very deep. I need to have a total connection with the music”Maria João Pires

One of the finest musicians of her generation, pianist Maria João Pires brings exquisite refinement, profound emotional depth, and intellectual insight to her playing. Her ability to go beyond the analytical and seek out the spiritual dimension of the music often reveals hidden meanings and unexpected nuances. She can bring a huge variety of intensities, colours and poetry to the music – from eloquent, delicate transparency in Mozart and Chopin to robust passion and monumentality in Beethoven, and tender, poignant intimacy in Schubert. 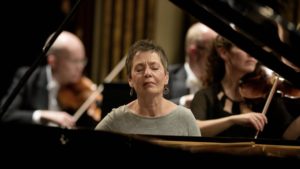 Yet Pires, by her own admission, has never enjoyed performing and eschewed the traditional trappings of the concert virtuoso, preferring to wear comfortable clothes and sensible shoes rather than an evening dress, and she has also suggested that concerts are too formal and should be more relaxed and intimate. She is critical of music competitions too, which she feels encourage rivalry and glorification of performers rather than focusing on the subtleties of the music. A committed and sensitive teacher, in 2014 she launched the Partitura Project to encourage altruistic collaboration and social engagement amongst students and teachers – a far cry from the formal master-pupil structure of a music masterclass – and her own approach to music making is reflected in some of her students, such as the young Russian pianist Pavel Kolesnikov, whose refined playing is a tribute to his teacher.

Born in Lisbon in 1944, Maria João Pires made her debut at the age of five. She studied composition and music theory at the Lisbon Conservatory, followed by further studies in Munich and Hanover, Germany. She made her London debut in 1986 at the Queen Elizabeth Hall and played in New York three years later. She has performed with the major European and American orchestras, including the Berlin Philharmonic, the Concertgebouw Orchestra, the London Philharmonic and the Boston Symphony Orchestra. In late 2018, Maria João Pires announced her retirement from performing and touring after a long and acclaimed career of some 70 years.

In her concerts and recordings, Pires has chosen to focus on the piano music of the greatest composers for the instrument – Mozart, Beethoven, Schubert, Chopin and Schumann – and her special musical insight derives not only from a detailed knowledge and understanding of the score, but also the ability to draw on her own life experiences, art and culture, and so forth to create a vibrant, richly expressive narrative which draws the listener’s attention away from the performer’s personality to focus on the music itself. She is a true artist who goes beyond technical limitations to explore and illustrate the feelings aroused by the sound of the music and the composers’ inspirations.