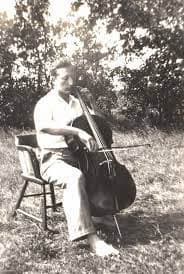 Another cellist and composer whose name we should not forget is Pál Hermann. Born into a middle-class family in Budapest, Hungary in March of 1902, he showed great talent and audacity even as a child. It is said that he refused to practice the piano unless he was given a penny for each etude he played! By age 13 he began his studies at the Franz Liszt Academy, where his teachers included esteemed composers Zoltán Kodály and Béla Bartók, Adolf Schiffer on cello (who was a student of David Popper), and composer Leo Weiner for chamber music—the teachers of both János Starker and my father. 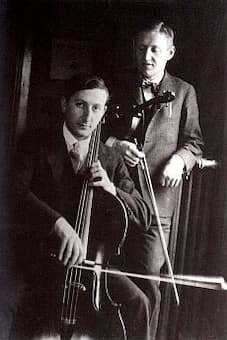 Carine Alders, a writer for Forbidden Music Regained relates a story that indicates how bold Hermann could be. In 1918 Hermann happened to be on the same tram as Kodály. Hermann was carrying a string trio that had recently been composed by his friend violinist Zoltán Székely (Bartók later wrote his Violin Concerto No. 2 for Székely.) Hermann nonchalantly began whistling the theme of the trio, and, just before his tram stop, he thrust the score to the music into Kodály’s hands. To his credit, Kodály, rather than being affronted by the cheekiness, invited both Hermann and Székely to his home and a long association ensued.


But the 1920s brought severe restrictions upon the Jewish population in Hungary. Numerus Clausus, (closed number) laws restricted the number of Jews allowed to attend university to 6 percent of the population. Young artists like Hermann moved to Berlin. There, Hermann was accepted into the class of famed cellist, teacher, and composer, Hugo Becker. While Hermann studied in Germany he maintained a duo with Székely who’d moved to the Netherlands, and they concertized throughout Europe. By 1930 Hermann was very much in demand for his performances. A tremendous advocate for contemporary music, he performed works of Hindemith, Stravinsky, Schoenberg, and Dutch composers of the day, as well as Kodály and Bartók. He premiered the Frank Bridge Cello Sonata and in December of 1930 Hermann premiered the Kodály Duo for Violin and Cello at the Concertgebouw in Amsterdam bringing it to international attention. Also on this program was Hermann’s own Grand Duo for Violin and Cello, which is very much in Hungarian style and extremely well written for the two string players—beautifully lush, and rhythmic. 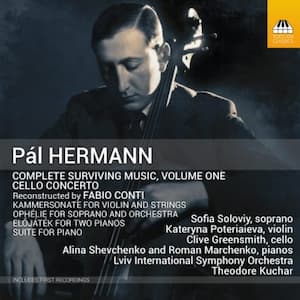 Once Hitler seized power in 1933 and became Chancellor, life became untenable in Germany for anyone of Jewish origin, whether they were secular or not. Hermann and his new wife Ada and baby daughter Corrie, returned to the Netherlands. Tragedy struck. Ada died of pneumonia in 1933 at the young age of 25. With the care of the infant in the hands of Ada’s non-Jewish family, Hermann moved to Brussels to join a string quartet, and later, he relocated to Paris where his career had more prospects. But the looming threat of war tainted the atmosphere.

After war broke out in 1939 Hermann’s livelihood was severely curtailed. A review in 1940 indicates that Hermann performed an “excellent” rendition of Milhaud’s Cello Concerto in February of 1940. After that Hermann attempted to continue performing with an assumed name and false identity papers. Soon he had no choice but to go into hiding. Tragically, he was discovered, captured, and deported during a raid in Toulouse in 1944—first to Drancy, then to Auschwitz, and finally Kaunas-Reval in Lithuania. Of hundreds of people captured in Toulouse that day, only a handful survived. They perished without a trace, Pál Hermann among them.
Pál Hermann: Toccata (Andrei Banciu, piano)


Some of Hermann’s compositions remain—virtuosic string music, (string trios and duos) piano works including a brilliant Toccata from 1936, some beautiful songs, and a stunning and lyrical but unfinished Cello Concerto. Listen to the gorgeous first movement performed by the cellist Clive Greensmith during a presentation entitled “Recovered Voices Initiative” from the Colburn Conservatory of Music in Los Angeles, CA. Funds from the family went to organizations in the Netherlands and Hungary, as well as the Colburn Conservatory, to preserve Hermann’s legacy and numerous unpublished scores were donated to the Colburn School by Hermann’s daughter and grandson. When stacks of music arrived at the school, going through and studying the music seemed a daunting task. Happily, the efforts of the teachers and faculty resulted in four world premieres of works by Pál Hermann, held at the Colburn Conservatory.

Fragments of music, unearthed among the piles of scores, allowed Italian composer Fabio Conti to reconstruct the concerto in 2016. It’s now a five-movement work—a wonderful addition to the cello repertoire. Hermann’s other surviving works have also been recorded.

During the Second World War, many composers were silenced because they were of Jewish descent. In fact, any artist who resisted the regime resulted in their music being banned. The Leo Smit Foundation carries out research, tells composers’ stories, makes sheet music available, and performs forgotten music. Their mandate: Let forbidden music sound again. We musicians must continue to be advocates for this music. It is our great fortune to be able to bring Hermann and other composers to life in this way.