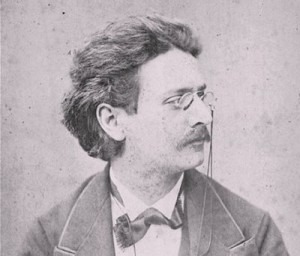 Composer and cellist David Popper is well known among cellists. His High School of Cello Playing is our Bible—40 Études comprising every acrobatic feat of cello pyrotechnics.

Popper was born among the narrow streets of the Jewish ghetto of Prague, Czechoslovakia June 16, 1843. David was five years old when in 1848 the Hapsburg emperor granted civil equality to the Jews and their isolation in the ghetto ended. The gloomy, unhealthy homes of the ghetto made a lasting impression on Popper despite the fact that most of his music is cheery and uplifting. The family was able to move out of the area when Popper was eight years old. By then employment restrictions had been lifted and some trades were permitted, as was being a musician.

15 Leichte Etuden in der ersten Lage, Op. 76a
Popper’s father was a Cantor—the religious leader who sings the prayers in the Synagogue. At a very young age Popper began to imitate his father’s singing. Popper’s talent was such that he was allowed to study with the famed cello pedagogue Julius Goltermann, (a name cellists are familiar with due to his cello compositions.)

In December of 1862 Popper was bestowed the coveted title of “Kammervirtuoso” by Prince Constantine Hohenzollern-Hechingen. In appreciation, Popper composed a series of pieces that are among his most cherished works Arlequin and Papillon from the Six Character Pieces. Conductor Hans von Bülow, heard Popper perform and was so impressed with the young man that he helped arrange a concert tour for Popper, his first, in 1863. As a solo cellist Popper had the opportunity to try his own compositions as well as to perform the major works for cello and orchestra. He was always dedicated to the music of his time, premiering several new cello concertos.

Popper became widely regarded as one of the distinguished cello soloists of his time.

From 1868-73, Popper took the position of principal cello of the Vienna Court Opera. He had many opportunities to perform and hobnob with the great artists in Vienna and to play with none other than the widow of Schumann, Clara (Wieck) Schumann who was at the peak of her popularity as an artist. Popper performed Schumann’s Trio in D Minor with Clara Schumann and the concertmaster of the Court Opera, violinist Jacob Grün in 1869. 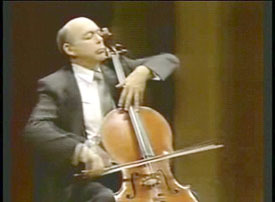 The Imperial Court Opera Orchestra began organizing symphony concerts in 1842. The musicians were allowed a certain autonomy. They could refuse to perform anything the members did not approve of ! Popper, as the principal cello and always the more progressive musician, lobbied his colleagues for the acceptance of Bruckner’s Second Symphony after his colleagues initially rejected it. By the time the symphony was premiered Popper had already resumed his solo career.

Popper performed chamber music as a member of the Hubay String Quartet with violinist Jenö Hubay. Popper and Hubay, were lucky enough to play with the elder Johannes Brahms, performing several of his chamber music works with the composer at the piano, playing from hand written manuscripts. They premiered one of my favorites, the Piano Trio No 3 in C minor, in 1886. Popper greatly admired Brahms.

Suite for 2 Cellos, Op. 16
Popper was fortunate enough to make the acquaintance of another great composer— Richard Wagner. There was no love lost between Brahms and Wagner. Despite knowing that, during a dinner at Wagner’s home, Popper didn’t hesitate to contradict Wagner when he said something negative about Brahms, insisting that Brahms was a musical genius. After this remark Popper was not invited back to Wagner’s home. Nonetheless, Popper transcribed several Wagner piano solo works for cello and his admiration for him never diminished.

Popper didn’t hesitate when he was offered the position of professor of cello at the famed Liszt Academy in Budapest in 1896, where he remained until his death. He was thrilled with Budapest remarking that, “…There is a devilish lot of music in those Magyars. Everything resounds, sings, and rings music in this land…,”

As a teacher, Popper was inspiring. One of his students was Adolf Schiffer, Popper’s last protégé who, when Popper retired, was appointed to the post of professor of cello studies at the Budapest Academy. Janos Starker was Schiffer’s last student and Starker was my teacher. So Popper and I are practically related cellistically speaking!

He is known for his many exquisite cello compositions which include four concertos, the Requiem for Three Cellos and charming and lovely virtuoso show pieces, which are frequently played today as encores. Starker’s recordings of these pieces as well as the Études are glorious.

Popper must have been an exemplary cellist, as his pieces are extremely demanding and they explore the vast expanse of cello expression. Popper’s tone was said to be lustrous and lusty, his intonation impeccable and his execution faultless. Compositions range from charming dances like the Gavotte and Chanson Villageoise, to the virtuosic Spinning Song, Tarantella, Hungarian Rhapsody and of course the Elfentanz (Dance of the Elves)—the fast notes whizzing by up into the “nose-bleed” area of the cello (the highest extremity.).

Many of Popper’s works are unknown or out of print, and include countless lovely pieces, such as the Spanish Dances, Mazurkas, Nocturnes, and Sérénades as well as cadenzas for the major cello concertos and arrangements of non-cello works of composers from Chopin to Schubert and Handel to Tchaikovsky.

The Hungarian Rhapsody is one of my favorites to play. It begins, surprisingly with a cadenza—a free flowing virtuosic fast section with whistling harmonic sounds and notes flying up and down the instrument. The first melodies are foot stomping Hungarian folk-dances. Then a presto section of extremely quick notes fly by Elfentanz-style and it ends with a dizzying number of notes. You’ve heard the term tongue-tied. This piece makes cellists “finger-tied!”

These works, which require months of slow practice to perfect, improve our techniques the fun way—via lovely music, rather than tedious exercises. Popper is credited with expanding the cello repertory and its virtuosity as a solo instrument.

Listen for yourself. They are the Paganini pieces of the cello!