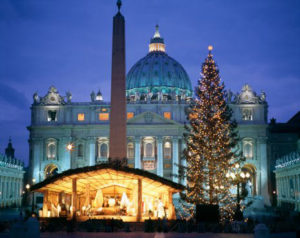 Christmas is celebrated in many parts of the globe, but Christmas in Italy is special. Italy has had a long Roman Catholic tradition, so it is hardly surprising that the holiday takes on a special flare. From vibrant light displays, bustling markets, and indulgent seasonal treats, Italy is the place to be during Christmas celebrations. Bagpipers and flute players, called “Zampognari” and “Pifferai” are dressed in traditional costumes and entertain people at religious shrines. And if you happen to be in Vatican City, go to the main square at noon on Christmas day to receive the official blessing of the Pope. 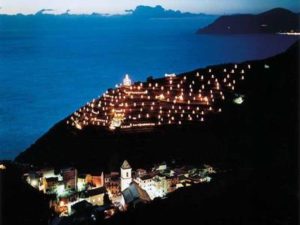 Actually, during the time of the ancient Roman Empire, citizens celebrated “Saturnalia,” during a period that roughly coincides with the Christmas celebrations of the Advent. Of course, for much of the duration of the Roman Empire, Jesus Christ had not yet been born, so “Saturnalia” celebrated the birth of the “Unconquered Sun.” Today, the Italian Christmas celebrations start on 8 December and lasts until 6 January. Italian children write to “Babbo Natale” asking for presents, and in some parts of the country “La Befana,” a kind old witch delivers these presents. In the cities of Venice and Mantova, it is “Santa Lucia” who brings the presents, and the “Gesu Bambino” is responsible for the rest of Italy. 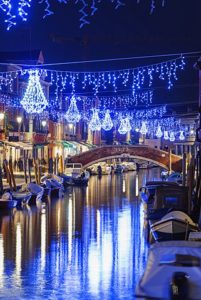 The main focus of Italian Christmas decorations is the “presepe,” or Nativity scene. St. Francis of Assisi made this tradition popular in the 13th century. He had made a pilgrimage to Bethlehem so see the place where Jesus was supposedly born, and brought the idea back to Italy. Nativity scenes are found in all churches—in or outside—and many Italian families have one at home. Many churches have nativity scenes arranged on a wooden frame in the shape of a pyramid, a kind of alternative Christmas tree. This is called a “Ceppo” (The Tree of Light), and consists of various shelves arranged on several tiers often reaching a height of several feet. The manger scene is placed on the bottom shelve, and fruit, candy, and presents are arranged above, with a small star frequently affixed inside the top of the pyramid. Everything is decorated with colored paper, candles and gilt pinecones. 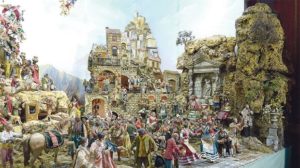 The city of Naples started to produce nativity scenes going back to the year 1025, and they are still famously producing them today. There is still a street of nativity scene makers called the “Via San Gregorio Armeno,” which you can visit. Neapolitan cribs always include people and objects, such as houses, waterfalls, food, animals and even figures of famous people and politicians. The biggest such nativity scene holds over 600 objects. And if you find yourself in Liguria’s “Cinque Terre,” don’t forget to take a peek at the hill in Manarola. The entire mountainside is adorned with an elaborate nativity scene, sporting some 15,000 lights. 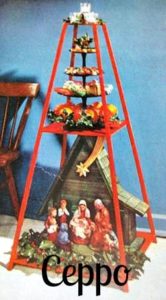 Enough sightseeing I hear you say, what about Italian food around Christmas time? Traditionally, Catholic Italian families did not consume meat on Christmas Eve, instead eating “baccalà” (salted cod) or lightly fried calamari. In Rome and parts of southern Italy the traditional dish of Christmas Eve is “Capitone” a big female eel, roasted, baked or fried. Christmas Eve dinner is traditionally followed by a living nativity scene and midnight mass. After mass, Italian families frequently enjoy a cup of hot chocolate alongside a slice of the Milanese Christmas Cake called “Panettone,” which is a dry and fruity sponge cake with candied fruit. 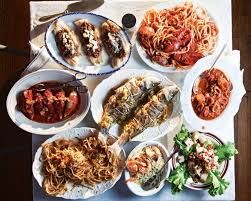 Feast of the Seven Fishes

However, in some parts of southern Italy, a traditional seven fish dinner is served on Christmas Eve. Known as the “Feast of the Seven Fishes,” this tradition was brought to the United States by Italian immigrants in the 1800s. Various theories have been proposed why there are seven fish dishes eaten on Christmas Eve. Possibly it refers to the seven days of creation in the Bible or it represents the seven holy sacraments of the Catholic Church. Be that as it may, some people suggest that the “Feast of the Seven Fishes” is now more popular in America than in Italy. 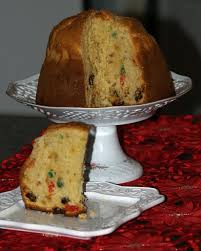 The most significant meal of the Christmas Season in Italy is reserved for Christmas Day. And it is lunch, “il pranzo,” to be precise. In northern Italy you might be treated to “lo zampone,” the skin of the lower pig leg, including the toes, filled with minced meat and sausage. Sausages made of pig’s intestines are frequently smothered in lentils, and the Christmas Turkey is stuffed with chestnuts. Various lamb dishes “l’agnello” are served with vegetables, mashed potatoes and lentils. 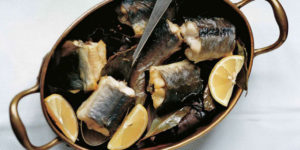 In southern Italy fish dishes predominate, but you can also find Tortellini in chicken stock or Crostini with liver pâté. Please make sure you leave some room for dessert, as Italian sweets include “torrone” (nougat), “il pandoro,” a sponge cake similar to Panettone but without fruits and raisins, and “il panforte,” gingerbread with hazelnuts, honey, and almonds. Don’t forget to wash it all down with “Vin brule,” mulled wine, or “Bombardion,” the Italian version of eggnog. All that needs to be done at this point is to wish everybody “Buon Natale.”