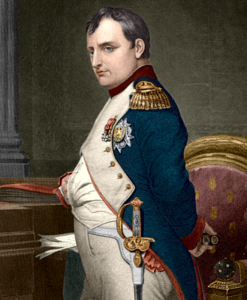 Rather surprisingly Napoleon Bonaparte occasionally revealed more knowledge of music and poetry that one would have suspected in a man generally considered to be indifferent to the fine arts. In a letter to Désirée Clary, his lover at the time, he writes, “Music is the soul of love, the sweetness of life, the consolation for sorrow and the companion of innocence.” In addition to deriving personal pleasure, Napoleon was convinced that music—like religion—could also be useful to the statesman. “A piece of moral music,” he writes, “one by the hand of a master, cannot fail to touch the heart and has much more influence than a good moral piece of writing, which moves the mind but has no effect on our behavior.” Music was a real pleasure for Bonaparte; “he loved it for itself and for the sensations which it gave him. It calmed his nerves, it put a halo round his dreams, and it soothed his melancholy and warmed his heart.”

But make no mistake; Napoleon knew exactly what he wanted. After hearing a performance by Angelica Catalani he was determined to keep her in Paris so that he would be able to hear her whenever he wished. He invited her to the Tuileries, and knowing full well that she was engaged elsewhere he asked, “Where are you going Madame?” The songstress replied, “To London, Sir.” In short order Napoleon declared that she must remain in Paris, and be rewarded with “a hundred thousand francs a year, and two month’s vacation.” Without consulting Catalani, the matter was settled for Napoleon and he sent an official contract to her house a couple of days later. However, Catalani had no intention of staying in Paris. On short order she disguised herself as a nun and convinced the captain of a vessel engaged in exchanging prisoners to take her on board for a generous fee. When the vessel left France, a single nun was amongst a whole ship full of English prisoners. Luckily for Catalani, military affairs took a more serious turn for Napoleon and he never pursued the runaway opera singer.