Features
Cellos and Cellists Star IN the Movies
by Janet Horvath May 7th, 2017 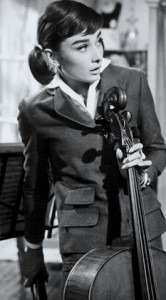 When I mention that I play the cello, people say, “The cello is my favorite instrument.” Hollywood has picked up on that sentiment. No longer merely the provider of soulful background music, although it is not yet an Oscar category, the cello or cellists play leading roles in several movies.

Gauche the Cellist, a 1934 short story by Japan’s Miyazawa Kenji, features an unexceptional professional cellist who is scorned by the conductor of the town’s orchestra. Goshu is criticized for not understanding the emotions of the music and when Goshu returns to his isolated cottage in the forest to practice, animals such as the cuckoo, the cat, the mouse and the badger teach Goshu the deep meaning of music. Several cinematic adaptations have been made of this story including the 1982 animated film by Takahata Isao, which has become a classic. The lead animator of the film apparently took cello lessons so he could faithfully portray the precise movements required to play the cello. The soundtrack includes numerous masterworks including Beethoven Symphony No. 6. 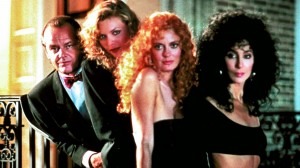 The Witches of Eastwick

The charming 1957 movie Love in the Afternoon, with Maurice Chevalier, Gary Cooper stars Audrey Hepburn, who plays an innocent teenage cellist. Apparently, she did much of the cello playing in the movie. Scenes with a Hungarian gypsy ensemble complete with the indigenous instrument, the cimbalom, are an added bonus.

One of my favorites is Woody Allen’s Take the Money and Run. Allen plays a ‘notorious criminal mastermind’ who tries to learn how to play the cello. It is abominable. Excruciating. He does what many of us feel like doing on a bad practice day. He tosses the cello out the window! Allen joins a marching band but he can hardly keep up because he has to drag a chair along. Spoiler alert: A street gang puts the cello out of its misery.

James Bond’s companion is a cellist in The Living Daylights. The Soviets chase them through Alpine country. Fortunately, the cello is in the back seat. Bond has an idea for a get-away. He ditches the car and he and his girlfriend jump into the cello case for a harrowing ride down the mountain, the cello held as a ballast. Don’t try this at home.

I heard that Amy Irving took cello lessons for the film Micki and Maude, a 1984 movie starring Dudley Moore. Maude is a seductive (aren’t they always?) professional cellist. Micki, desperate for a child, has a romantic fling with her, which leads to Maude’s pregnancy. It gets very complicated when Micki’s wife also becomes pregnant. 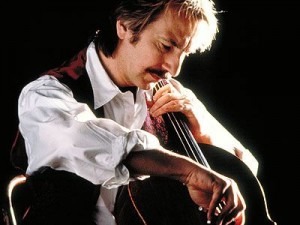 The 1987 movie The Witches of Eastwick features Cher, Susan Sarandon, Michelle Pfeiffer in witchly behaviors—spells, voodoo, levitation and lots of seduction. Sarandon’s rendition of Dvořák Cello Concerto is smoking hot, (you’ll see what I mean.) Jack Nicholson does a passionate if demonic accompaniment on the piano. “You have great passion. Let it out!” When the camera films the cello playing from above the fingerboard we see a professional cellist’s fingers. That also is the case in Truly Madly Deeply in which Alan Rickman, (Jamie) plays a cellist who has passed away. His widow is inconsolable. Jamie suddenly comes back to life while she is playing the piano part to the Bach Sonata No. 3 scored for cello and piano, (originally for Viol De Gamba and harpsichord.) He joins her on the cello. Rickman tolerably fakes playing until the camera pans onto lovely cello-playing fingers.

Bach: Viola da Gamba Sonata in G Minor, BWV 1029 – II. Adagio
The Soloist is a 2009 film based on a true story. Steve Lopez, a Los Angeles Times columnist, comes across a mentally ill, homeless street musician named Nathaniel Ayers—an astonishingly talented cellist, who sounds wonderful despite playing on a battered instrument. Lopez uncovers the underlying story that Nathaniel (played by Jamie Foxx) attended the famed Julliard School of Music. Lopez is thwarted by reality and the hard truths of homelessness when he tries to lead the cellist to a better life. Eventually Lopez’s story inspires someone to give Nathaniel a cello. He attends a concert of the Los Angeles Philharmonic at Disney Hall, and he starts cello lessons again but his demons continue to pursue him. One can hear the strains of Bach’s Solo Cello Suite No. 1 but when Nathaniel plays the cello part to Ludwig van Beethoven’s String Quartet No.15 in the tunnel it is a stirring moment. We can truly feel how music elevates. Foxx’s hand position is quite excellent.

The film Hillary and Jackie is ostensibly the story of the sibling rivalry between Jacqueline du Pré, one of the most brilliant cellists who ever lived, and her sister Hillary, a talented flute player who never attained the stature of her sister. To my mind and many other musicians, the movie is fabricated. In fact, several esteemed musicians: cellist Mstislav Rostropovich (her teacher), British cellist Julian Lloyd-Webber, and her husband, pianist and conductor Daniel Barenboim, vociferously challenged the accuracy of the movie. The movie features the Haydn Cello Concerto in C, and the Elgar Cello Concerto. Jacqueline du Pré’s recording remains the definitive interpretation of the Elgar. For the sheer drama and entertainment, it’s well done but it’s a misrepresentation of a stunning cellist, tragically struck down. Many of us will always idolize her.

Elgar: Cello Concerto in E Minor, Op. 85 – I. Adagio – Moderato
And don’t forget Deception with Bette Davis. Have I missed any of your favorites? Let us know!