Composers Inspiration
The Conductor Gets it In The End:
Deception and the Korngold Cello Concerto
by Janet Horvath July 6th, 2014
Tags: Korngold 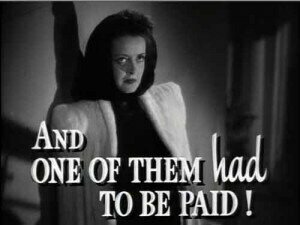 The classic film noir Deception, starring Bette Davis, is a racy, classic tale of passion, jealousy, and lust for power. The romantic music written by Erich Wolfgang Korngold carries the movie. At the time, Korngold was an Austro-Hungarian Jewish refugee. He was one of the lucky ones who escaped from Vienna in the late-1930’s. Although he was a well-known and successful composer of “serious” music in Europe, his only recourse was to flee to Hollywood where he could make a living writing film scores.

Both Strauss and Mahler were impressed with young Korngold. In 1909 Mahler took a keen interest in Korngold calling the child prodigy, “a musical genius” and he urged the family to have Korngold study with Alexander von Zemlinsky.

By the age of eleven Korngold had composed a ballet entitled Der Schneemann (The Snowman) creating a sensation when it was performed at the Vienna Court Opera in 1910. The eminent pianist Artur Schnabel performed Korngold’s Piano Sonata No 2 in E major throughout Europe. Operas and symphonic music followed. By 1920, famous conductors, soloists and singers vied to perform Korngold’s works including the Austrian born pianist Paul Wittgenstein who became known for commissioning new piano concerti for the left hand alone, (including one from Korngold) following the amputation of his right arm during World War I.

Korngold collaborated with Max Reinhardt on several operettas. In 1934 Reinhardt invited Korngold to come to Hollywood to adapt Mendelssohn’s A Midsummer Night’s Dream for a film. This lead to Korngold composing film scores over the next several years that are still considered classics.

Warner Brothers studios then invited Korngold to Hollywood to compose a score for The Adventures of Robin Hood starring Errol Flynn. Soon after he arrived by ship, in 1938, the Anschluss occurred—annexing Austria into Germany. The fate of Jews in Austria was extremely tenuous especially after Kristallnacht—the “Night of Broken Glass”, in November of that year, when Jewish homes, businesses and Synagogues were looted and destroyed and thousands of Jews were incarcerated. Korngold was forced to stay in America. Later, he said that this film saved his life. 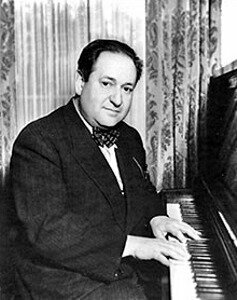 Korngold won an Academy Award for Best Original Score for The Adventures of Robin Hood, the first time an Oscar was awarded to a composer rather than the studio music department, establishing him as one of the founders of film music. His scores are so richly romantic, intricate and melodic that they stand-alone in any concert hall.

The movie Deception portrays a melodramatic love triangle between a composer/conductor (Claude Rains), a cellist who had just come to America from a concentration camp in WWII (Paul Henreid), and their common love interest, a pianist and composition student (Bette Davis.) She believes that Karel Novak (Paul Henried) had been killed, but in fact he was trapped in neutral Sweden. Meanwhile, Christine Radcliffe (Bette Davis) becomes a “kept” woman of the all-powerful celebrated composer/conductor Hollenius—this fabulously wealthy man of genius and impeccable taste. As is true of some conductors he’s an egomaniac and a bully, humiliating the musicians as you can see from the movie excerpt (link below.) “Nothing matters but music,” he says by way of excuse. Not an unrealistic situation!

A new cello concerto composed by “Hollenius” is to be premiered with Karel at the cello. Spoiler alert— the characters are driven to frenzy, and Christine to save her new husband cellist Karel from humiliation, murders the conductor before the premiere, in a fit of passion.

The cello faking by Paul Henreid is surprisingly good. The playing in actuality, is by cellist Eleanor Aller, well known as the cellist of the Hollywood String Quartet and mother of former National and Detroit Symphony conductor Leonard Slatkin. Her playing is gorgeous, mesmerizing. (See link below.)

The work was expanded and later published as Korngold’s Cello Concerto Op. 37 in C, in one movement for cello and orchestra. I was fortunate enough to perform it several times with the Minnesota Orchestra. (The movie was shown each time after the concert.) This is a stormy and dramatic work with unique sounds including brilliant harps, keyboards, flute solos and tuned percussion. The melodies are lyrical of heart-breaking beauty. Perhaps it is not as well established in the repertoire due to the fact that it is only thirteen minutes long.

The concerto opens with a gong and grand chords. The cello enters immediately with a noble melody “Allegro moderato, ma con fuoco”—moderately fast but with fire! There is a middle slow section of awesome beauty. The original opening theme soon returns morphing into a solo cadenza, which gets precipitously faster and faster. Double and triple notes abound, the cellist reaching higher and higher in the register until the orchestra enters grandly bringing the work to a close. This concerto is impetuous, virtuosic and a great vehicle to show off the cello soloist.

Sadly, until recently, Korngold has been forgotten. There is a resurgence of interest in his music. His oeuvre includes a surprising number of works for solo piano, singer, operas, symphonic works and chamber music, stage works, many film scores, the cello concerto and a violin concerto.

There is a humorous story about the cadenza of the concerto, which includes a passage of quick consecutive 10ths, virtually impossible to play on the cello. Eleanor Aller recorded a double track in post-production. At a dinner party in Hollywood after the film’s release, it is said that the famous cellist Gregor Piatigorsky, who was known for his enormous hands, asked Paul Henreid how he managed that!

Scene from the movie (opening of concerto with Eleanor Aller on cello; great playing!)

Movie excerpt: The conductor berates the orchestra and soloist in this rehearsal scene.