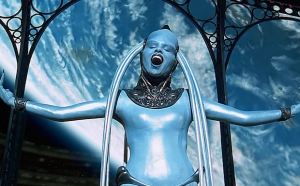 The quirky science fiction blockbuster The Fifth Element is set in the 23rd century and features an intergalactic struggle for the survival of planet Earth. This task falls on Korben Dallas (Bruce Willis), a taxi driver and former Special Forces major, after a young woman (Milla Jovovich) accidentally stumbles into his cab. They join forces to recover four mystical stones essential for the defense of Earth against crusty aliens with bad teeth. When the hero attends an opera recital on a luxury liner cruising through outer space, he is in for a major surprise! The soprano, Diva Plavalaguna, is a statuesque blue alien who launches into an eerie rendition of the Mad Scene from Gaetano Donizetti’s Lucia di Lammermoor. The otherworldly voice actually belongs to Albanian singer Inva Mula, and just have a listen to the digitally manipulated cadenza at the end of the aria!

Thomas Mann published his novella Death in Venice in 1912. The protagonist Gustav von Aschenbach suffers from writer’s block and visits Venice. He becomes liberated, uplifted, and increasingly obsessed by the stunning beauty of an adolescent Polish boy named Tadzio. Although he never speaks to the boy, much less touches him, the writer finds himself drawn into an existentialist struggle whether to follow a path of logic and reason or a path of passion. For the 1971 Italian-French film, the director Luchino Visconti changes the profession of the protagonist from writer to composer. This allows the musical score taken from the symphonies of Gustav Mahler to represent Aschenbach’s compositions. Unbeknownst to Aschenbach, Venice is gripped by a cholera epidemic and he quietly expires to the anxious strains of Mahler’s “Adagietto.”

The incredible storytelling of Peter Shaffer’s Amadeus brought Mozart’s music into the everyday life of millions of people. In fact, it turned Mozart into a household name. This fictionalized biography of Wolfgang Amadeus Mozart is set in the latter half of the 18th century in Vienna. The plot is based on the premise that Antonio Salieri, jealous of his musical rival, plans to kill Mozart and present a Requiem to be premiered at Mozart’s funeral. And since this is a movie about Mozart, his music is heard extensively in the soundtrack of the movie. Salieri famously claimed to have heard “the voice of god,” and I for one, could not agree more!