Ludwig van Beethoven’s five Sonatas for Cello and Piano span the entirety of his life. From the lyrical Sonata in F Major Op. 5 No. 1, and the three sets of variations, to the grandiose Sonata Op. 102. No. 2 in D major, these works are considered the epitome for cellists and we love to play them especially since Beethoven didn’t bestow a solo concerto upon us.

Before Beethoven, the cello was usually relegated to the role of the basso continuo. Beethoven freed the cello. He was a young man and a piano virtuoso himself when he wrote the two Op. 5 sonatas. Considered sonatas for piano with cello, one need only listen to the piano lines to hear brilliant piano writing. But even in the early sonatas, the cello writing is ground-breaking in its lyricism and virtuosity, even venturing into high registers.

As with the Bach Solo Cello Suites, generations of cellists have recorded these works but certain cellists with their brilliant piano counterparts stand out.

Leonard Rose and Glenn Gould Play Beethoven’s Sonata for Piano and Cello in A major
I. Allegro ma non tanto

The Op. 69 sonata in A Major may be the most popular among cellists. Written in his middle period when he was by then nearly deaf, Beethoven wrote some of his signature works including the Violin Concerto, his Op. 70 piano trios, and the Fifth and Sixth Symphonies. Despite his hearing challenges, this sonata is exquisitely rendered, with gorgeous melodies, rich variations of material, and an equal partnership with the piano. 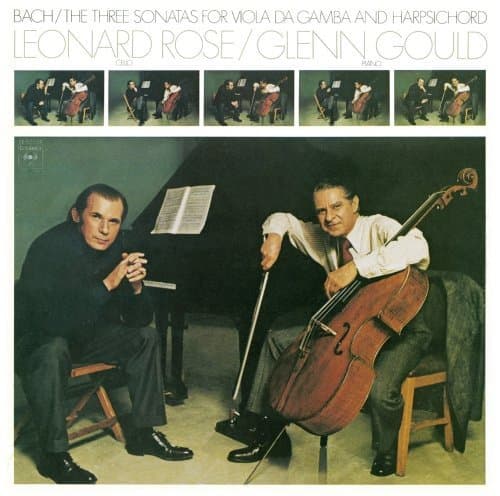 Leonard Rose recorded the sonatas with the superb Polish-American pianist Horszowski Mieczyslaw but the version with Glenn Gould is extraordinary. They both play the Op. 69 sonata in A Major from memory and it is seamlessly unified. Rose’s sumptuous sound and Gould’s probing intensity draw listeners in. Before the recapitulation, time stands still as the rhythm hangs in the balance. What a miraculous interpretation. Gould and Rose also recorded the Three Gamba Sonatas by Bach.

Beethoven’s Sonata for Piano and Cello in A major – II. Scherzo. Allegro Molto 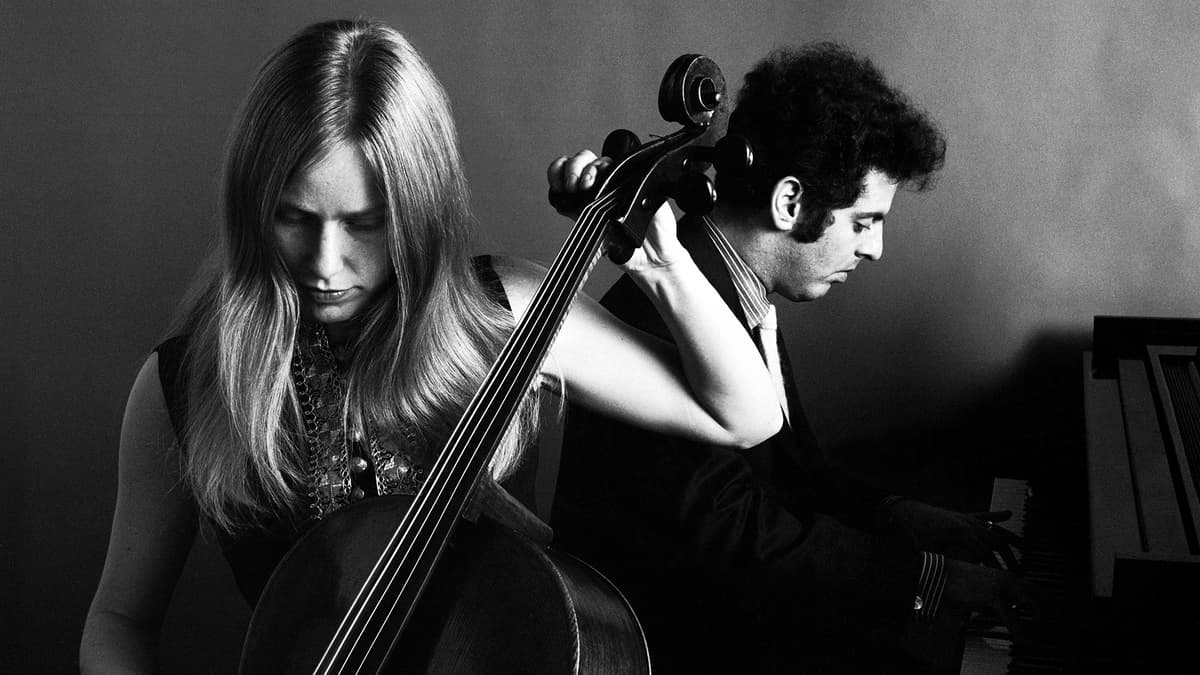 Cellist Jacqueline du Pré recorded Sonata No. 3 and No. 5 with Stephen Kovacevich in studio in 1965, and they are wonderful. Her partnership with pianist Daniel Barenboim led to recordings of the Beethoven Sonatas in 1970 at the Edinburgh Festival. The performance of the F major sonata is transcendent. Du Pré’s exuberant playing is on the romantic side capturing the ferocity as well as the witty playfulness of the sonata. Barenboim performs with sparkling effortlessness and is nothing short of dazzling. Together the pair reach the pinnacle of collaboration. 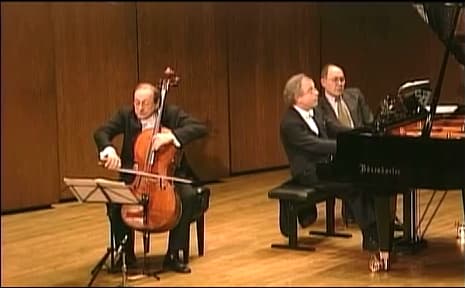 The two Hungarians Miklós Perényi and Sir András Schiff are another very interesting partnership. They recorded all the sonatas, and the three sets of variations, but also include Beethoven’s Sonata in F Major Op. 17 composed in 1800 for the virtuoso horn player Giovani Punto. Due to its difficulty on the horn, it was published in a cello version one year later. This sonata is not performed as often but it is lovely. The cello line is lyrical and the piano part is still the more virtuosic, full of octave lines, thrilling flourishes, and arpeggios. Schiff plays with fleetness and delicacy. In two of the variations, Beethoven wrote melodies from Mozart’s opera Magic Flute, and the other set of variations features Handel’s Judas Maccabeus. The set of seven variations in E-flat Major WoO 46 takes us through a world of moods in only eight minutes of music. You’ll find this pair plays with quicker tempos in general while maintaining grace, elegance, and the power of interpretation. They played three of the sonatas in Budapest at the Liszt Academy of Music and recently in New York at the 92nd Street Y. 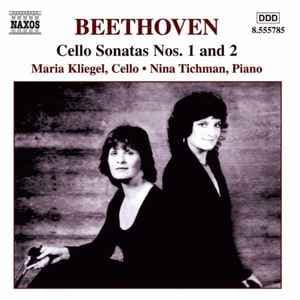 Maria Kliegel and pianist Nina Tichman play the Sonata No. 2 in G minor with elegance and panache. The piece is written unusually enough in only two movements when at the time composers wrote in the traditional three-movement sonata style. The opening Adagio sostenuto e espressivo forecasts later works of Beethoven with its weighty solemnity but the melodies are gorgeous too. Once it launches into the Allegro Molto più tosto presto Beethoven alternates between seriousness, and gracefulness, between minor and major keys. Kliegel and Tichman make a convincing case highlighting these contrasting moods. The Rondo Allegro is lighter and humorous with glittering piano lines and lovely repartee between the cello and piano. The duo captures the subtlety and occasional fierceness of the piece. 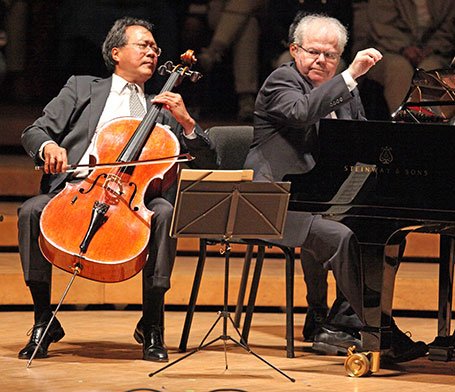 The Opus 102 sonatas date from Beethoven’s late period and were written between the Eighth and Ninth symphonies and his last piano sonatas. Yo-Yo Ma and Emanuel Ax recently released the album Hope Amid Tears of all the cello sonatas, their second time recording these works. They play the C Major Sonata opening with a beautiful delicacy. Like the A Major sonata, the cello begins alone. It flows gracefully and without hurry. Even the Allegro vivace maintains grace but with an undercurrent of simmering unrest. The performers hold back while the mystery builds, taking unforeseen pauses, and bringing out Beethoven’s crisp dotted rhythms, unusual harmonies, and transcendent lyricism. This interpretation is heavenly. Yo-Yo and Ax play with flawless ensemble. 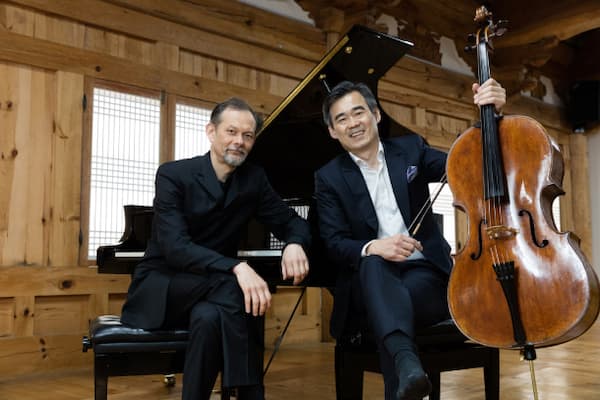 Sung-Won Yang the South Korean cellist, recorded the complete Beethoven cycle in 2007 and has just released another set with pianist Enrico Pace, recorded in 2021. If you wonder why an artist would choose to do this, as the other cellists featured also did, he explains, “Interpreting his music is a reflective process, an inner research that we carry out throughout our performing career and beyond.” The slow movement of the last sonata Adagio con moto sentimento d’affetto is, as Beethoven indicated, sentimental and full of pathos, the timelessness and suspenseful sections a mere whisper. It is followed by an expansive fugue. This is a thoughtful interpretation.


The Beethoven Cello works are wondrous and when we can perform them collaborating with thoughtful partners it is indeed the pinnacle.