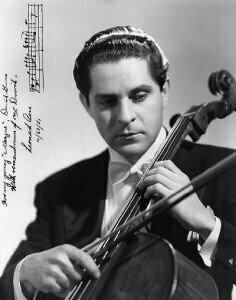 American cellist Leonard Rose, born in 1918, came by his talent honestly. His father was a cellist, as was his cousin Frank Miller, the legendary principal cello of the Chicago Symphony, with whom Rose studied before he attended Curtis Institute of Music. By the age of 18 Rose was playing in the NBC Symphony under the baton of Arturo Toscanini. Later he became principal cello of the Cleveland Orchestra and then the New York Philharmonic in 1943. Just three years later Rose left orchestral life to dedicate himself to his solo career and to teaching at the Juilliard School of Music, a position he held for more than three decades.

At the peak of his career he performed as many as 110 concerts per year with all the greatest conductors of the era including Bruno Walter, Eugene Ormandy, and George Szell, making some 60 recordings. Rose enjoyed telling stories about the various mishaps that occurred in performance. One such story appears in an article in 2004 by Tim Janof, (editor, International Cello Society.)

“If you want to know things that tend to take a couple of years off one’s life, it’s times like this one, under very trying circumstances …” He was performing a concerto with the New York Philharmonic on live radio. Legendary Maestro Leonard Bernstein, “caught Rose’s bow in his baton with one of his famously large sweeping upbeats and his bow sailed about ten feet. Rose tip-toed over to his bow, and, after confirming that his bow was undamaged, he tip-toed back to his cello and continued the performance without a glitch.” 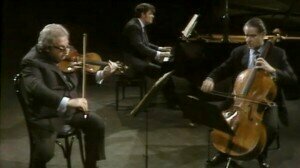 His many notable musical partnerships include his association with two other distinguished soloists, Eugene Istomin and Isaac Stern, a trio that performed for 23 years until Rose’s untimely death. Their recording of all the Beethoven trios in 1970 won a Grammy award and during Beethoven’s bicentennial in 1970 they performed over 50 concerts all over the globe.

Beethoven: Piano Trio in E-Flat Major, WoO 38 (Stern, Istomin, Rose) – I. Allegro Moderato
Rose also partnered with Glenn Gould in Bach’s three Viola da Gamba Sonatas and one of my favorite recordings of the Beethoven Cello Sonata in A major is with Glenn Gould on piano. Apparently, during the filming of this performance the producers, anxious to get rid of the unwieldy music stand in front of Rose, asked if he had the cello part memorized. Rose most assuredly did but he wasn’t certain Gould had committed the fistfuls of notes to memory. Gould memorized the piano score overnight, from his bed.

“I think ‘sound’ is terribly important. I must confess I’m a sucker for sound! I like to think of sound on an instrument, particularly a string instrument, in the same way that a marvelous painter thinks about colors. Not all his reds are the same, nor blues, nor greens. He is constantly making variations of color/sound; and for me the really artistic players try to make differences.”

A wonderful teacher who never imposed his style upon his students, he focused on individuality, and in particular on the bow arm so each student produced an exquisite and unique tone. One of his students was introduced by Isaac Stern, who wanted Rose to hear the then nine-year-old little Chinese boy. After the lesson, Rose was smitten by the child’s talent, instantly convinced that Yo-Yo Ma would become one of the greatest cellists of all time. Rose’s influence as a teacher is immense. His students include Lynn Harrell, Hans Jørgen Jensen, Matt Haimovitz, Ronald Leonard, and imagine: “At one point, four of the cellists in the Philadelphia Orchestra, five in the New York Philharmonic, six in the Cleveland Orchestra and seven in the Boston Symphony Orchestra had been protégés of Mr. Rose.” (as indicated in Rose’s obituary in the New York Times in 1984.)

Rose was tremendously demanding of himself and his students. Although his playing seemed effortless, he practiced incessantly—four or five hours a day, no detail left unexamined. His expressive, luscious interpretations of the repertoire is best heard in his stunning recordings of the Schumann Concerto, and Bloch’s Schelomo, but he also championed living American composers, and performed the early classical and baroque masterpieces. One would never know from Rose’s playing that he struggled with performance anxiety.

Bloch Schelomo with Cleveland and Maazel

Rose left another invaluable legacy—he edited numerous scores, which include sonatas, such as by Grieg, Franck, and Brahms, concertos by Lalo, Haydn, Saint-Saëns, short pieces such as Rachmaninov’s Vocalise, and etudes such as Klengel’s Technical Studies. His three volumes of “Orchestral Excerpts from the Symphonic Repertoire” are invaluable for cellists who aspire to an orchestral position with suggestions for fingerings and bowings for the most difficult sections of symphonic works. My copies of these volumes are quite frayed at the edges from constant use! Leonard Rose was among the truly great cellists of the last century.

The biography reminds those who knew, respected, and loved the man about his unique personality, and introduces a new generation to this extraordinary musician.