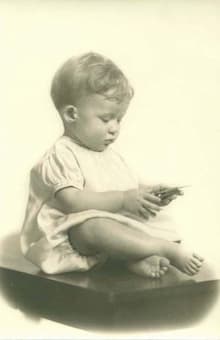 Nothing could possibly have prepared Florence Emma Gold and Russell Herbert Gold for the arrival of their son Glenn Herbert, born on 25 September 1932 in Toronto. Florence was a part-time voice teacher, and her maternal grandfather John Charles Holman Greig, had been a cousin of the Norwegian composer Edvard Grieg. Bert Gold was an amateur violinist, and the family informally changed their surname to “Gould” around 1939 “to avoid being mistaken for Jewish, given the prevailing anti-Semitism of pre-war Toronto.” 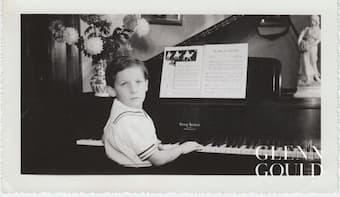 Glenn Gould as a child

It was almost immediately apparent that Glenn Gould had extraordinary talents. It has been told that as a baby, Glenn “reportedly hummed instead of crying and wiggled his fingers as if playing chords, leading his doctor to predict that he would be either a physician or a pianist.” His mother soon discovered that Glenn had perfect pitch, and he learned to read music before he could read words. At the age of five he was able to play simple tunes his mother taught him and he started to make up some tunes of his own. And his father reports, “that the young Glenn frequently stuck single notes on the piano and listened to their long decay.” 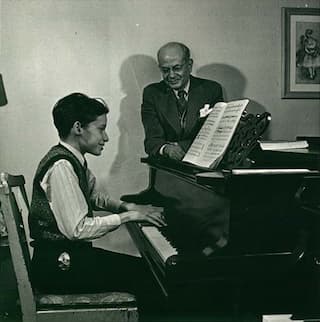 Florence and Bert Gould decided that their son should have a normal childhood, and the “phrase child prodigy was spoken as a dark curse.” They made a pact to protect him from premature exposure to the world of professional music and decided that he would not be allowed to practice too much. In fact, a limit of four hours a day was set and strictly enforced. He did play his first pieces for family and friends, and occasionally at the Emmanuel Presbyterian Church. Gould witnessed his first live musical performance at the age of six, and he later recalled, “It was Hofmann. It was, I think, his last performance in Toronto, and it was a staggering impression. The only thing I can really remember is that, when I was being brought home in a car, I was in that wonderful state of half-awakeness in which you hear all sorts of incredible sounds going through your mind. They were all orchestral sounds, but I was playing them all, and suddenly I was Hofmann. I was enchanted.” 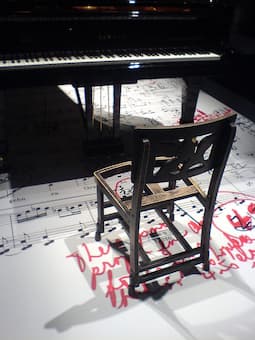 Gould “found going to school a most unhappy experience and he got along miserably with most of his teachers and all of his fellow students.” His childhood was dominated by music, and he attended public school essentially part-time, and in high school, he was more often absent than present. To be sure, his fellow students found him peculiar. “He could sometimes be seen conducting an invisible orchestra as he walked home from school, both arms flailing in the wind as he hummed the parts. Students seldom made fun of him, however, they tended to view him with wary respect… He played no sports, and if anyone threw a baseball or football at him—either out of ignorance or to tease him—he pulled his hands back and turned away, letting the ball fall to the ground.” Apparently, his handwriting was atrocious, but he was easily at home in mathematics. “In grade ten geometry he gobbled up the year’s textbook in a single month, and explained things to his fellow students and teachers.” He did like literature, and “when a poem was assigned to us to memorize he sometimes set it to music.” 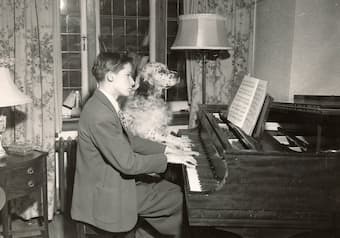 At the age of 10, Gould began attending the Royal Conservatory of Music in Toronto, studying music theory with Leo Smith, organ with Frederick C. Silvester, and piano with Alberto Guerrero. Although Gould would later claim to be self-taught, Guerrero mentored him for 10 years and certainly widened the horizon of his young charge by drawing on ideas from beyond music. At about that time, Glenn injured his back as a result of a fall from a boat ramp. “This incident is almost certainly related to the adjustable-height chair his father made shortly thereafter, and Gould used this chair for the rest of his life, taking it with him almost everywhere.” Apparently, he refused to play any Mozart, “because everyone was playing it.” However, at the age of ten he could play all of Bach’s Well-Tempered Clavier, and soon thereafter the Partitas. Incidentally, Gould had many pets, including goldfish named Bach, Beethoven, Chopin, and Haydn. His parakeet was named Mozart, and his succession of dogs included Sinbad, Sir Nickolson of Garelocheed, and Banquo. “He also had rabbits, turtles and even a fully functioning skunk.” In the event, Gould passed his final Conservatory examination in piano at age 12, “achieving the highest marks of any candidate, and thus attaining professional standing as a pianist.