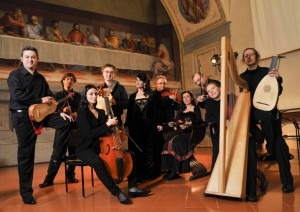 What do you get when you enrich the subjectivity of artistic interpretation with the objectivity of scholarly study? In terms of terminology you get “historically informed performances.” However, in philosophical terms you get one of the most contentious topics since the invention of processed cheese! I won’t bore you with details, but at issue is the performance of music with special attention to the technology and performance conventions that were present when a piece of music was composed. Hearing musical artefacts in this way is not necessarily authentic! And as has been pointed out repeatedly, the attempt to understand the past in terms of the past is paradoxical and a contemporary phenomenon. Yet ironically, the historically informed performance movement arose in the latter half of the 19th century as a reaction to the way modern techniques were imposed upon music of earlier times. At present, it all comes down to either achieving fidelity to the conditions of performance, or the fidelity to the musical work. Here then is my short list of performers/conductors—in no particular order or significance—who shaped the course of historically informed performance practice.

Theoretical ruminations aside, the “Bach Cantata Project” stands at the very forefront of the movement. Keyboardist Gustav Leonhardt and conductor/scholar Nikolaus Harnoncourt decided to combine forces and record the complete sacred cantatas of Johann Sebastian Bach. The musical community had never heard anything like it. Here was Johann Sebastian Bach performed on period instruments grouped into smaller ensembles. The tempos got faster and the texture rougher, and vibrato essentially disappeared from the soundscape. It also replaced female voices with those of unbroken boy trebles, even in some solo movements! And all of it based on historical, scholarly research! To make Bach relevant for the 20st century, Harnoncourt had consulted a number of period musical treatises and manuscripts and re-historicized Bach’s music for modern audiences.

Not everybody was excited about the new sounds offered by the movement! And when Joshua Rifkin studied some original scores used by Bach’s singers, he came to the contentious conclusion that only one singer per part originally performed Bach’s vocal music. Together with the Bach Ensemble—performing on period instruments in period style—Rifkin went to work performing cantatas, and even larger Bach works like the B-minor Mass, in that configuration. Originally, reaction was swift and devastating and Rifkin was accused of being a charlatan or worse. Things have settled down somewhat, and most UK performances are currently approached in this manner. After much debate, it appears increasingly likely that most of Bach’s vocal works were composed and performed in this fashion, but you are still likely to get into an intellectual fistfight at music conferences arguing for or against concerted performances.

Johann Sebastian Bach: Mass in B Minor, BWV 232 (Joshua Rifkin)
Disenchanted with the massive and mushy sound produced by major orchestras, Sir Neville Marriner advocated smaller and more agile groups of instrumentalists for the performance of early music. Together with the Academy of St. Martin in the Fields, he offered fresh and technically brilliant interpretations of Vivaldi, Mozart and Haydn. In essence, Marriner revived the chamber ensemble as a viable alternative to the big symphony orchestras, and forced orchestras everywhere to improve their act. Establishing a centrist position on the spectrum of the early-music movement, Marriner made more than 600 recordings of 2,000 musical works. Yet, he remained committed to playing Mozart, Bach and Handel on modern instruments, even when vocal purists forcefully advocated a return to period instruments and styles.

A leading figure in the historically informed performance movement, Ton Koopman believes that to achieve authenticity in performance one has to use exact copies of historical instruments from the time of the composer. And that also includes adopting a performing style practiced by the composers or their contemporaries. And while some of his colleagues have ventured into performances of newer music, Koopman has famously said, “I draw the line at Mozart’s death.” Between 1994 and 2004, Koopman has conducted and recorded all existing cantatas by Johann Sebastian Bach, a project for which he received a number of important awards. He has also been an advocate of the music of Dieterich Buxtehude, who served as an important model for the young Johann Sebastian Bach.

Christopher Hogwood, one of the most outspoken founders of the historically informed performance movement famously stated, “You can play things stylishly on the wrong instruments or unstylishly on the right instrument; I hope we’ll get it stylish on the right instruments. It’s just clearing the way so that people hear them as the composer intended, and if [the composer] wasn’t a complete idiot, the way he intended is presumably the correct way.” Such dictatorial views, advocating canonical and singularly authoritative performances on behalf of long-dead composers or style have not been universally embraced. Be that as it may, performances and recording by Sir John Eliot Gardiner, Jordi Savall, Christopher Page, Paul Hillier, Andrew Parrott, Frans Brüggen—authentic or not—have unlocked a completely new and exciting world of sound.