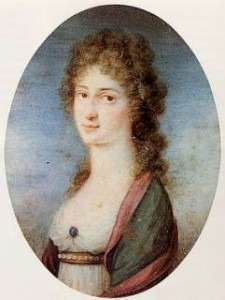 Beethoven’s love life is a mystery. He wrote a series of passionate letters — a total of 10 pages written in pencil — to a woman, his “Immortal Beloved.” These heartbreaking letters were found after Beethoven’s death. To this day the debate rages as to who the intended recipient might be of these unsent letters.

There were several women in Beethoven’s life including Giulieta Guicciardi, Thereza von Brunswick, Amalia Seebald and Antonie Brentano. In the 1950’s a watermark was analyzed which clarified the year and the place the letters may have been written. They were written during the summer of 1812, in Teplitz.

Historians believe the woman may be the latter — the daughter of a diplomat and the Viennese wife of a Frankfurt businessman, mother of five children. Beethoven and she met in 1810 and did spend quite a bit of time together. Beethoven dedicated his Diabelli Variations Opus 120 for piano to her and she was “in the right place at the right time” giving birth nine months later. A flurry of speculation surrounds the idea that perhaps Beethoven fathered a child.

Czech and American music scholars published an essay in 2000, claiming that a woman heretofore unmentioned is the true Beloved.

“This candidate has never before been suggested and is the strongest to date,” says William Meredith, head of the Ira F. Brilliant Center for Beethoven Studies at San Jose State University in California, that houses the largest collection of editions of Beethoven’s music, over 3,000 books and a large collection of recordings. They also have the famous lock of Beethoven’s hair, which was purchased at Sotheby’s.

Upon Beethoven’s death in 1827, the letters remained in the hands of Anton Schindler then went to his sister and today they are housed at the Berlin State University.

Here are excerpts of the love letters.

“Why this deep sorrow when necessity speaks – can our love endure except through sacrifices, through not demanding everything from one another can you change the fact that you are not wholly mine, I not wholly thine – Oh God – look out into the beauties of nature and comfort your heart with that which must be. Love demands everything and that very justly.”
– Your faithful LUDWIG

Though still in bed, my thoughts go out to you, my Immortal Beloved, now and then joyfully, then sadly, waiting to learn whether or not fate will hear us – I can live only wholly with you or not at all – Yes, I am resolved to wander so long away from you until I can fly to your arms and say that I am really at home with you, and can send my soul enwrapped in you into the land of spirits – Yes, unhappily it must be so – You will be the more contained since you know my fidelity to you. No one else can ever possess my heart – never – never – Oh God, why must one be parted from one whom one so loves. And yet my life in V is now a wretched life – Your love makes me at once the happiest and the unhappiest of men – At my age I need a steady, quiet life – can that be so in our connection? My angel, I have just been told that the mail coach goes every day – therefore I must close at once so that you may receive the letter at once – Be calm, only by a clam consideration of our existence can we achieve our purpose to live together – Be calm – love me – today – yesterday – what tearful longings for you – you – you – my life – my all – farewell. Oh continue to love me – never misjudge the most faithful heart of your beloved. ever thine, ever mine, ever ours… 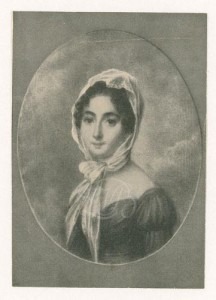 How fortunate that we have these letters! Also unearthed at Beethoven’s death written to his brothers in October 1802, is the famous and agonizing Heiligenstadt Testament. Beethoven despairs over losing his hearing. These poignant words resonate with all musicians and music lovers.

“Oh, how could I possibly admit an infirmity in the one sense which ought to be more perfect in me than others…”

Surely Beethoven’s irascible behavior can be pardoned, given these tragic letters. These letters have inspired me to write a poem.

There were beloveds. The music. A woman.
Angels and heroes. Sphere of breadth and depth.
Landscapes of emotions and extremes
Or intimacy. Sound and sound and sounds.

*Parcae: Or The Fates. In Ancient Roman myth the three Parcae were the female mythological deities of destiny who measured the thread of someone’s life.