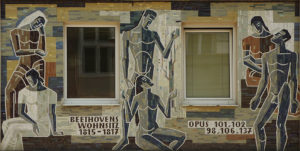 It comes as no surprise that Beethoven moved dozens of times during his time in Vienna. Never a homeowner, he did not have much furniture to carry around, and finding lodgings was somewhat easier than it is now. However, he was famous for having explosive disputes with his landlords, and to his neighbors he must have been the nightmare from next door. Beethoven kept strange hours, playing his piano at all hours of the night. He was also famous for his disputes with his housekeepers, and he had trouble finding consistent help. Neighbors often complained of loud crashing noises as Beethoven threw plates and books at his maids, often accusing them of stealing money from him. And let’s not forget about his rather peculiar dining habits. Once a housekeeper brought him a tray of food only to find it untouched several weeks later. Rotting food, piles of dirty dishes and a lack of personal hygiene made Beethoven a rather unpleasant character and neighbor. 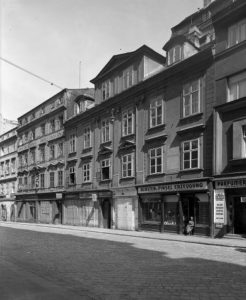 Between 1815 and 1817, Beethoven moved into a third floor apartment at Tiefer Graben 10 in the first district of Vienna. There seems to be some discussion whether Beethoven actually lived there between 1799 and 1800. To be sure, he must have visited or even lived at that location at both times, so it’s primarily a discussion that needs to be settled by academics. Be that as it may, the building itself had originally been erected in 1563 and was used as a bakery for almost 200 years. In 1778 it became the property of the writer Franz Salesius von Greiner. Greiner was a great lover of music and his social and musical gatherings attracted Haydn, Mozart, and Salieri alongside a whole host of literary figures. After his death in 1798, the house passed to his widow Karoline and their two children. Beethoven might certainly have kept the neighbors away, as he presumably composed the “Hammerklavier Sonata” and Opus 101 at that location. However, he also wrote “An die ferne Geliebte,” and the Cello Sonatas Op. 102. The house was destroyed in a bombing raid in 1944, and was rebuilt in a typical non-descript modernist style after the war.