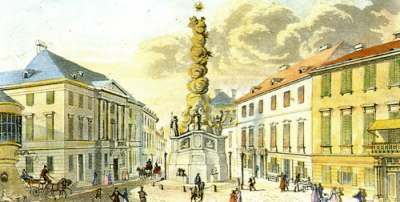 The town of Baden

By 15 November 1815, Beethoven’s brother Caspar Carl’s health had suddenly deteriorated, and he suddenly collapsed and died on that very day. In his will, he appointed Beethoven the sole guardian of his only child, the 9-year-old Karl, but an addendum cancelled this and made the boy’s mother co-guardian. Caspar Carl writes, “Having learnt that my brother… desires after my death to take wholly to himself my son Karl, and wholly to withdraw him from the supervision and training of his mother, and inasmuch as the best of harmony does not exist between my brother and my wife, I have found it necessary to add to my will that I by no means desire that my son be taken away from his mother, but that he shall always and so long as his future career permits remain with his mother, to which end the guardianship of him is to be exercised by her as well as by my brother… for the welfare of my child I recommend compliance to my wife and more moderation to my brother. God permit them to be harmonious for the sake of my child’s welfare. This is the last wish of the dying husband and brother.”

Clearly, Caspar Carl had some anxieties about the guardianship of his son, and they were well founded. Six days after the death of his brother, Beethoven appealed the decision in court, and by January 1816 he was assigned sole guardianship. Johanna appealed on her part, and the legal fight was only resolved in Beethoven’s favor in July 1820! The struggle for the care and upbringing of the nephew lasted some four and a half years, and were followed by another six trying years with Beethoven struggling to raise the teenager. Between July and October 1816, Beethoven retreated to the town of Baden, and lodged at the Ossolynskisches Schloß. This small castle belonged to a magnate Polish family, and through his connection to nobility, Beethoven was given permission to spend the summer. Entirely preoccupied with the care of his nephew, Beethoven almost completely ceased composition, only managing to complete two cello sonatas by summer’s end.