On 29 March 1795 Ludwig van Beethoven made his public debut in Vienna. Performing at a charity concert at the Burgtheater, Beethoven appeared as a composer as well as the featured virtuoso. He performed a piano concerto of his own, which was later published as his Second Concerto Op. 19. An old friend from Bonn witnessed the preparations for this concert, and relates how Beethoven completed the finale only at the very last moment while suffering from severe abdominal pains. At the second charity concert the next day, Beethoven performed an extended improvisation, and on 31 March he played a Mozart concerto in the presence of his widow Constanze. For Beethoven, 1795 turned out to be a memorable year. He was working on his first piano trios and piano sonatas, which he performed at a private soiree at Count Lichnowsky’s Palace. The very same year, he appeared with Joseph Haydn in a recital at the Redoutensaal, and the public response was overwhelming. 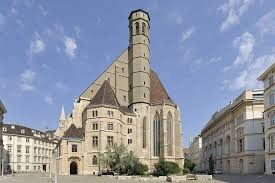 When Beethoven advertised his Trios, Op. 1 in May 1795, he gave his address as “Ogylisches Haus in the Kreuzgasse behind the Minorite Church, No. 35 on the first floor.” Centrally located in the First District of Vienna, Beethoven’s lair was situated northwest of the Hofburg, and in close proximity to the Burgtheater. Little is known about the owners or the layout and shape of the apartment, but the structure is currently found at Löwelstrasse 6. In addition, we are not sure when Beethoven actually moved into or out of this dwelling since we have no known address for him in Vienna between 1796 and May 1799. While residing at Kreuzgasse 35, Beethoven was briefly joined by his brother Johann who had left the city of Bonn to seek his fortune in Vienna as well. Eventually, Johann would make his living as an apothecary in the city of Linz, while the older brother Karl made his career in the Viennese civil service.