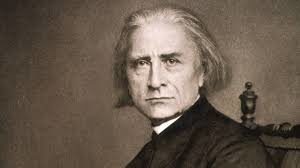 It might not be a complete surprise, but Franz Liszt and Felix Mendelssohn really didn’t like each other! Mendelssohn first heard a Liszt performance at a concert in Paris in 1825. In his opinion “Liszt had many fingers but few brains, but his improvisations were absolutely wretched.” As Mendelssohn subsequently wrote to Moscheles, “Liszt is a true artist whom you can’t help liking even if you disagree with him. The only thing he seems to me to lack is a true talent for compositions, I mean original ideas.” They first met face to face in 1831, and Liszt wrote to Marie d’Agoult, “Mendelssohn draws wonderful sketches, plays the violin and the viola, can read Homer fluently in Greek and speaks four or five languages.” 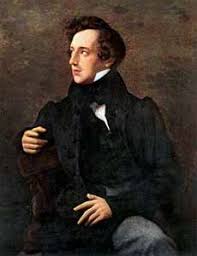 But it was the 1825 concert in Paris that had originally soured the relationship. Liszt reports “Mendelssohn, on one occasion, drew a picture on a blackboard of the devil playing his G minor concerto with five hammers on each hand instead of fingers. The truth of the matter is that I once played his Concerto in G minor from the manuscript, and as I found several of the passages rather simple and not broad enough, if I may use the term, I changed them to suit my own ideas. This, of course, annoyed Mendelssohn, who, unlike Schumann or Chopin, would never take a hint from anyone. Moreover, Mendelssohn, although a refined pianist, was not a virtuoso, and never could play my compositions with any kind of effect, his technical skill being inadequate to the execution of intricate passages. So the only course laid open to him, he thought, was to vilify me as a musician.”

It seems, however, that Liszt managed to get his revenge. He tells the story that he met Mendelssohn at dinner at the Comtesse de P’s in Paris. “Mendelssohn had been unusually witty and vivacious at dinner, and after dessert the Comtesse asked him if he would favor us with one of his last Songs without Words, or anything he might find appropriate. Mendelssohn most graciously condescended to sit down at the piano, and to my astonishment, instead of treating us to one of his own compositions, he commenced my Rhapsody No. 4, which he played so abominably badly, as regards both the execution and the sentiment, that most of the guests, who had heard it played by myself on previous occasions, burst out laughing. Mendelssohn, however, got quite angry at their mirth, and improvising a finale after the thirtieth bar or so, dashed into his Capriccio in F-sharp minor, No. 5, which he played through with elegance and a certain amount of respect. At the conclusion we all applauded him.”

And then it was Liszt’s turn at the piano, as Mendelssohn begged him to play something new and striking. Liszt, however, was determined to get his revenge and have some fun at Mendelssohn’s expense. “So I seated myself at the piano,” Liszt reports, “and announced that I would perform the Mendelssohn Capriccio, Op. 5, arranged for concert performance by myself. In a second the guests had comprehended that I intended to avenge Mendelssohn’s butchering of my poor Rhapsodic, although I suppose many thought it a rather hazardous attempt to play a difficult composition in a new garb or arrangement on the spur of the moment, especially with the composer sitting within two yards of the keyboard. However, I did what I had announced to do, and at the conclusion, Mendelssohn, instead of bursting out with indignation and rage at my impudence and liberty, took my right hand in his, and turned it over, backward and forward, and bent the fingers this way and that, finally remarking laughingly that since I had beaten him on the keyboard, the only way of vindication was to challenge me to a boxing match. However, since he had now examined my hand, he would have to abandon that particular course of action. So everything passed over smoothly, and what might have been a very unpleasant meeting turned out a most enjoyable evening.”