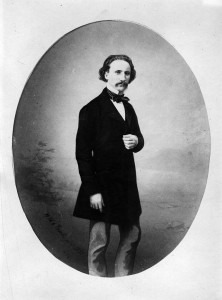 Like many young and talented Nordic musicians, Thomas Dyke Acland Tellefsen (1823-1874) was drawn to the city of Paris. Born in Trondheim, Norway, Tellefsen moved to Paris in 1842 and studied piano with Scandinavian pianist Charlotte Thygeson, who was one of the star pupils of Friedrich Kalbrenner. And on 27 July 1842 he heard Franz Liszt play for the first time. He excitedly reports, “I sat close to him, while he was playing, shouted and behaved myself like a madman, but one cannot do otherwise when you listen to him, because his playing makes you mad! His dexterity is limitless to the extent of being miraculous. He has a marvelous equalness of touch, his octaves, third and sixths are so shining and equal, trills in thirds and sixths are so round, his scales are so fluent that it is impossible to imagine. His left hand playing cannot be compared to anything, in short—it was pinnacle of perfection.”

Inspired and energized, Tellefsen made good progress and eventually studied with Kalbrenner himself. Yet his main goal for coming to Paris in the first place was to study with Chopin. “My enthusiasm for Chopin brought me to Paris,” he writes, and he finally managed to secure a place in Chopin’s piano studio in 1844. Over the next 3 years the two men became close friends and following Chopin’s premature death, Tellefsen inherited some of Chopin’s most notable students, including Jane Stirling and the Polish Princess Marcellina Czartoryska. Tellefsen gave his highly successful debut in Paris in 1851, and he was regarded as one of the most significant pianists of his time. What is more, the public regarded him as a faithful heir of Chopin’s playing tradition. In addition, Chopin’s musical style combined with influences of Nordic folk music to inform Tellefsen’s own compositions. In all, he composed 44 opus numbers including works for solo piano that favored the forms used by his master. But we also find a good deal of chamber music and two piano concertos. A critic suggested, “His playing is spiritual like Chopin’s and his own compositions reveal an un-mistakable talent and a strongly marked sense of rhythm, melody, and harmony, they are (as so many compositions are not), rich in spirit.”