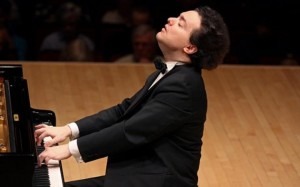 The word “encore” is French and has a variety of meanings – still, longer, yet, again, but not actually “play some more”. It entered the English language as a corruption of the Italian word “ancora” (“again”), and it was used from the early 18th century by audiences of Italian opera in London. Curiously, when French and German audiences request an encore they say “Bis” (‘twice’), which is what the Italians do as well. Encores are generally short pieces played at the end of the main concert. Many encore pieces are technically challenging and ostentatiously virtuosic, a beguiling or witty little treat tossed out to amuse and delight the audience, a final firework that sends everyone off on a high, or a calming salve after the pyrotechnics of the main programme. Encores should always feel totally spontaneous, though of course they must be practised and finessed.

“Applause is a receipt, not a bill” said the pianist Artur Schnabel, implying that no soloist should feel obliged to play an encore at the end of a concert, no matter how noisily the audience applauds, or rises to its feet. Indeed for some programmes an encore would be inappropriate. So you rarely hear an encore after a performance of the Goldberg Variations, or Beethoven’s or Schubert’s last three piano sonatas: such is the philosophy and otherworldliness of these works that to say anything else would be unbefitting. (Also, the performer is probably too tired to play anything else……)

The timing of the encore is important in creating anticipation and drama between soloist and audience. To play an encore after just one curtain call may seem a little over-eager. The pianists whom I quizzed in advance of writing this article were generally agreed that “third [curtain] call; one encore; short and scintillating” was appropriate. A further encore can be considered an additional treat, but there is nothing worse than the soloist who doggedly soldiers on and offers an encore, or encores, because they’ve prepared for it, even though the audience response does not necessarily warrant it. Most performers are generally alert to the finishing time of concerts as well, aware that some people have trains to catch, or simply want to get to the pub before closing time!

Russian pianists tend to be generous in their encores: in 2007 Evgeny Kissin famously gave not one, not two but twelve encores at his Carnegie Hall performance, tossing off piece after piece to his adoring audience. The concert finally ended at a quarter to midnight…… Grigory Sokolov is also magnanimous in rewarding his audiences with a slew of encores, including the complete Schubert ‘Moments Musicaux’ and sparkling miniatures by Jean-Philippe Rameau, as well as works by Bach, Chopin, Brahms and Scriabin.

For the audience, an encore can offer a little more personal contact with the pianist. Performers are often more relaxed when they come to play an encore – the stress and strain of the main concert has passed, and they can unwind with a little bon bon of music, lightening the atmosphere for themselves and audience. Encores are often a chance to hear unfamiliar or unexpected repertoire, and a well-chosen encore can round off an evening very nicely. Some performers even specialize in encores, and build entire programmes and recordings based on them.

Amongst the most beloved piano encores are Liszt’s Transcendental and Paganini Etudes, specifically Feux-Follets and La Campanella, and not forgetting his Mephisto Waltz and Hungarian Rhapsodies, Schulz-Evier’s grandiose paraphrase of Strauss’s ‘The Beautiful Blue Danube’, Moszkowski’s exuberant Étincelles, ever-popular waltzes, impromptus, Nocturnes, Preludes and Mazurkas by Chopin, Schubert’s Impromptu in G-flat, Preludes by Rachmaninov, Debussy’s l’Isle Joyeuse, the two Reveries and various Preludes, and etudes and paraphrases by Godowsky.

Liszt – La Campanella
Schulz-Evier – The Beautiful Blue Danube
As a concert-goer, I’ve encountered some unusual encores, including a quotation by Horace, read by harpsichordist Mahan Esfahani after his performance of the Goldberg Variations at the 2011 BBC Proms, Dudley Moore’s ‘Colonel Bogey’ in the style of a Beethoven Sonata, played by Piers Lane at the Wigmore Hall, and described by the pianist as “a rather naughty piece!”, and at the Queen Elizabeth Hall in 2013, Polish pianist Piotr Anderszewski played Bach’s complete French Suite No. 5 as an encore. He had already played the work as part of the main programme, but he just “wanted to play it again”, and it was a truly delightful end to a very memorable concert.