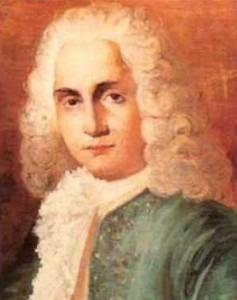 Alessandro Marcello (1673-1747) lived a rather charmed life! As the son of a senator and a member of Venetian nobility he presided—together with his more famous brother Benedetto—on the city high council. He studied law at the Collegio di S. Antonio, and joined the Venetian Arcadian Academy, a literary society, in 1698. Groomed for diplomatic services he acted as the ambassador in the Levant and the Peloponnese in 1700 and 1701. Financially secure, upon his return to Venice he pursued his interest in the arts. He selected and commissioned paintings for the family palaces and parish church, and published 8 books under the pseudonym Eterio Stinfalico. Once he was named head of the “Accademio degli Animosi,” he greatly expanded its collection of musical instruments.

And did I mention that Alessandro also dabbled in music? He organized a number of concerts and musical events, and published a relatively small number of chamber cantatas, violin sonatas, and concertos. The cantatas deal with pastoral subjects and were intended for Venice’s best singers, including Faustina Bordoni who studied with his brother Benedetto. However, he is probably best known for his concertos, particularly a set of six works published under the title of La Cetra (The Lyre). According to scholars, these concertos are “unusual for their wind solo parts, concision and use of counterpoint within a broadly Vivaldian style.” Considered a “last outpost of the classical Venetian Baroque concerto,” they reflect a knowledge and understanding of the differences in French, Italian, and German music of the time. And that includes choices of instruments for solo and continuo parts and use of ornamentation. The Concerto for Oboe and Strings in D minor is perhaps his best-known work. If you are not familiar with this oboe concerto, maybe you have nevertheless heard the work in a different context? It was Johann Sebastian Bach who initially fashioned a solo keyboard arrangement in 1715. Two years later it appeared as a keyboard concerto falsely attributed to Benedetto Marcello. In the event, BWV 974 was correctly attributed to Alessandro Marcello only in the 1950’s.