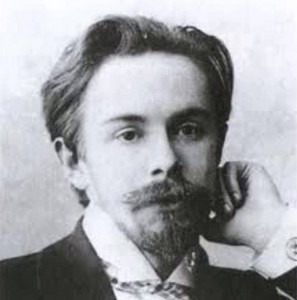 During his lifetime, Scriabin was primarily known as a pianist, with Igor Stravinsky marveling at his phenomenal playing. Yet Scriabin also had the uncanny talent of making enemies, including his composition teachers. Sergei Taneyev was not impressed, and Anton Arensky failed Scriabin in his examinations. And Rimsky Korsakov found Scriabin to be “self-opinionated, warped, strange and distorted.” He showed serious mental instability during the early stages of his life, and eventually believed that the world could only be saved through his art. He certainly had vivid hallucinations, and saw the end of the world culminating in a grandiose sexual orgy. Vladimir Ashkenazy has lauded Scriabin’s greatness and suggested that the composer can only be understood in his homeland, with pianist Vassili Safonov calling him “Russia’s Chopin.”

Abrasive and narcissistic personality aside, Scriabin had a unique and rather unusual compositional voice. At the tender age of 24, Scriabin needed a vehicle to simultaneously show off his skills as a composer and performer. The natural choice was a piano concerto, and the composer supposedly penned the F sharp minor concerto, Op. 20, in a matter of days during the autumn of 1896. It still took several months before the work was fully orchestrated, and Scriabin premiered the work on 23 October 1897. His only true concerto and one of his earliest works to involve a full orchestra, it combines spectacular virtuosity with an abundance of melodic ideas, rich orchestral colors and harmonic diversity. At this early stage of his musical development Scriabin leaned heavily on Chopin, in both his poetic pianism and orchestral mannerisms. The highly emotional outer movements bracket an introvert and poetic slow movement whose lyrical theme is subjected to four contrasting variations. When Scriabin published his Piano Concerto in F sharp minor, Op. 20, the famous pianist Alexander Glazunov once said, “this piece proves without the shadow of a doubt that Scriabin has lost his mind,” to which Rachmaninoff supposedly replied, “He never had a mind to loose!” Sounds like there is a bit of jealousy in play in this rather harsh assessment, don’t you think?