Blog
The Spirits of Music
by Doug Thomas January 4th, 2021

In a previous article — entitled The Kitchen & the Pit —, I mention the relationship between music and food, and more specifically between the orchestra and the kitchen. I conclude by pointing out the similitudes in the training of cooks and musicians, the sacrifices they both go through, the thirst for knowledge and discovery, the structural organisation of kitchen and orchestra, and how chefs and composers are ultimately very much alike. It is on this parallelism that I draw the following article; a new comparison, this time with beverages: alcohol, wine and more specifically spirits.

I recently started developing and training my palate and my nose, and the similarities between how I train(ed) my ears and these two other senses are flagrant. There is a systematic approach to tasting any sort of beverage — entitled SAT —, from the different steps of approach (first through the look, then the aromas and the palate), to the different aromas used and identified, or the lexicon. This system reminds anyone who has ever trained his ear through the recognition of intervals, triads, arpeggios, chords, scales and progressions, as well as rhythms. 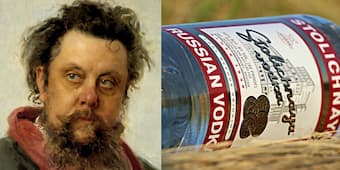 Mussorgsky’s death was due to his excess of alcohol © MusicSpoke

Just as in music, developing these senses involves starting with an imperfect use of them. Indeed, the sight is the sense that is the most developed for human beings, and learning how to use our ears, nose and palate in an equal way takes a lot of practice. It is all about rebalancing our senses.

It also takes time to identify an aroma or a flavour; just like one would find a piece sounding sad or happy, and later understand the harmonic and melodic content responsible for this feeling — and later requalifying the sounds as major, minor, dominant etc. —, one would somehow perceive a particular flavour and only through training would later understand the cause of it and the correct naming of it. 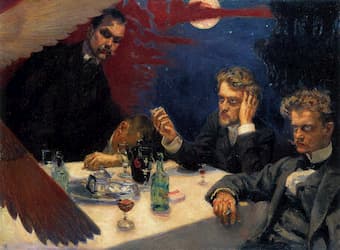 The Symposium by Akseli Gallen-Kallela, drinking buddy of Jean Sibelius (most right) © Lords of the Drinks

There is certainly a relationship — and perhaps even a friendship — between music and alcohol, and it has existed for many years. In popular music, rock’n’roll would be quite different without bourbon or Jack Daniel’s Tennessee Whiskey — “One Bourbon, One Scotch, One Beer” springs to everyone’s mind of course. But this relationship is true in the world of Western classical music too. Beethoven was fond of red wine, Schubert was often found in taverns, Stravinsky adored scotch — and loved it so much, he would jokingly change his name to Stra-whisky — and unfortunately Mussorgsky’s death was due to his excess of alcohol. The Finnish composer Räihälä even released a piece entitled “Ardbeg (The Ultimate Piece for Orchestra)” that pays tribute to the peaty scotch of Islay. 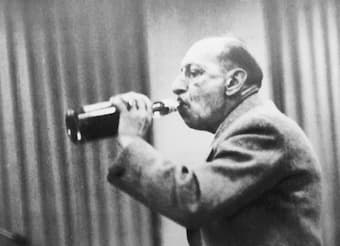 Of course, music is rich thanks to its diversity, from Western classical music, to jazz and popular music, to Eastern classical music, and their own form of improvised music and popular music. A lifetime is not enough to grasp the full richness of it.
And the same should be said about any fermented or distilled beverage. A single understanding of Scotch — which is the Whisky exclusively made in Scotland —, for instance, would demand a full commitment and many sacrifices, both timely and financial.

This dual diversity is additionally a blessing as it allows to pick and choose depending on the envy; A peated malt with Tchaikovsky perhaps, an aged rum with Debussy or even a glass of Burgundy with Chopin!