Composers Inspiration
Classical Music and Wine
“Where There Is No Wine There Is No Love”
by Georg Predota September 16th, 2018 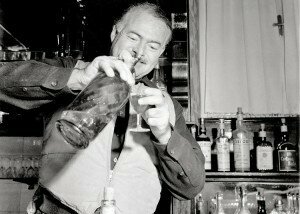 Ernest Hemingway never met a drink he didn’t like! In fact, he had a rather tumultuous lifelong affair with alcohol. Given such expertise, we should probably pay close attention to what this great novelist and journalist had to say about wine. “Wine is one of the most civilized things in the world and one of the most natural things of the world that has been brought to the greatest perfection, and it offers a greater range for enjoyment and appreciation than, possibly, any other purely sensory thing.” How can you possibly argue with that? And you don’t have to look very hard to find references to the making and drinking of wine in music. Take for example Joseph Haydn’s oratorio The Seasons. Based on text by the Scottish poet James Thomson, “Autumn” erupts in a raucous choral celebration of wine. Haydn himself described the concluding section “as a drunken fugue.”


Let’s merry be this joyful day!
Hang sorrow! Let’s cast care away!
Let us now both sport and play!
Three cheers for the wine, the noble wine,
that joyfully now appears!
Let’s praise the juice divine. All hail to the wine! 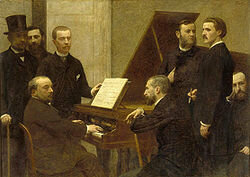 Emmanuel Chabrier (1841–1894) was one of the greatest composers of comic opera. His comic masterpiece L’Étoile (The Star) was first performed on 28 November 1877. It turned out to be a huge success with 48 follow-up performances in its first run. Music of great imagination and beauty serves a rather whacky and ridiculous plot. King Ouf always celebrates his birthday with a public impalement, and has gone out in disguise to find a victim. The young peddler Lazuli has fallen in love with Princess Laoula, and he is seriously unhappy to learn that she is to marry Ouf. As it happens, Lazuli insults Ouf who rejoices in having found his impalement candidate. However, the court astrologer Siroco reveals that if Lazuli dies, so will Ouf. As a result, Lazuli is taken to the palace and treated like royalty. The ambassador Hérisson de Porc-Epic is jealous of Lazuli’s love for Laoula, and attempts to kill him. Lazuli barely survives, and a terrified Ouf gives his blessing to Laoula and Lazuli’s marriage. Given such terrifying twists and turns of the plot, it’s not surprising that Ouf and Siroco fortify themselves with a bit of Chartreuse.

Medieval clergy strenuously warned their flocks about the dangers of drinking. In a sermon from the Middle Ages we read, “First, drink deranges man’s sense; secondly, it alienates the mind; thirdly it excites to shameful and improper things.” Yet these are precisely the virtuous that were enthusiastically celebrated in drinking songs. Many of these songs were composed by students, monks and the clergy, “suggesting that the religious spirit was hardly as pious and dour as it is sometimes imagined.” Juan Ponce (1476-1520) held the chair of humanities at Salamanca University, and while there he composed the four-voice drinking song “Ave color vini clair.” Composed at the beginning of the 16th century, “Hail, to the color of clear wine” celebrates in classic Latin poetry the great sense of elation accorded by a glass or two. 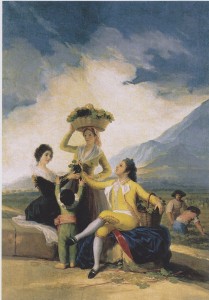 Juan Ponce: “Ave color vini clari” (Hail to the color of clear wine)
The outskirts of the city of Vienna are peppered with open-air taverns called “Heuriger.” Taking their name from “this year’s wine,” local winemakers serve their homegrown wine alongside simply foods, and on occasion, a bit of music. Franz Schubert and his friends were frequent visitors to the “Heurigen,” and it predictably inspired a composition or two. Schubert’s Drinking Song, D. 183 dates from 1815 and sets poetry by Alois Zettler. This immediately memorable strophic song delightfully extols the virtues of friends and wine in navigating the troubled waters of life.