In Tune Arts
The Music of Poetry
Pablo Neruda: “Poems of Love and of Protest”
by Georg Predota May 9th, 2021 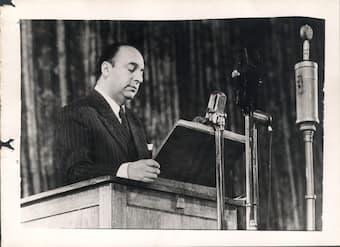 Pablo Neruda famously quipped, “Love is so short, forgetting is so long.” In his “Saddest Poem” he laments the loss of a lover who has moved away from him. The strong connection of the poem to the stars and sky hints at the insurmountable distance between him and his former love.

I can write the saddest poem of all tonight.

Write, for instance: “The night is full of stars,
and the stars, blue, shiver in the distance.”

The night wind whirls in the sky and sings.

I can write the saddest poem of all tonight.
I loved her, and sometimes she loved me too.

On nights like this, I held her in my arms.
I kissed her so many times under the infinite sky.

She loved me, sometimes I loved her.
How could I not have loved her large, still eyes?

I can write the saddest poem of all tonight. 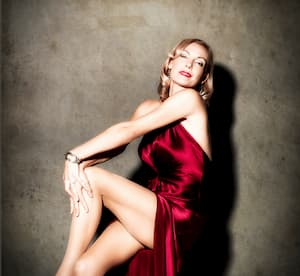 This poem encompasses a wide range of emotions and sentiments, and the German chanteuse Ute Lemper has not simply added music to the poetry, but discovered the music within it. The musical accompaniment, taking its inspiration from the Argentinian Tango, is based on the rhythms and melodies inherent in the poem. A reviewer suggested, “Lemper achieves a superb integration of poem and music, reflecting the inner meanings and emotional flow of Neruda’s words.” 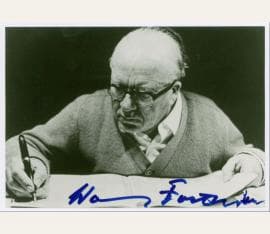 The love poem “Farewell” encapsulates the theme of being abandoned. Neruda’s lover yearns to leave and not be bound by love, abandoning his pregnant wife, as he is not prepared to face the responsibility of being a father. This early poem mirrors Neruda’s disgust “with his new urban surroundings where love has been commercialized into sex and his natural self contaminated by industrial and city artifice.” Essentially, it explores his alienation from his country roots, and “Farewell” explores the poet’s insecurity and fear of losing his freedom.

From deep inside you, and kneeling down,
a sad boy, like me, is watching us.

For that life that burns in their veins
our lives would have to be tied up.

For those hands, daughters of your hands,
my hands would have to kill.

For your opened eyes on the earth
I will see tears in your eyes, one day.

My eyes will not delight themselves in yours anymore,
My pain will not be sweetened by you anymore.

But wherever I go I will take with me your gaze
And wherever you go you will take my pain.

I was yours, you were mine.
What else? Together we made

A bend on the route where love went past.
I was yours, you were mine.

I am leaving now. I am sad: but I’m always sad.
I come from your arms. I don’t know where I’m going.

…From your heart a child says farewell.

And I say farewell to him. 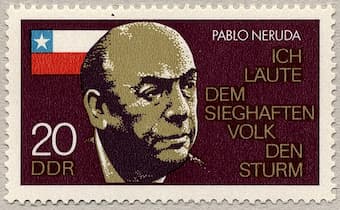 Political considerations have always played an important part in Neruda’s poetry. “His dramatic and rhetorical skills and his ability to speak out were consummate. In his best poetry he speaks on a scale and with agility unrivaled in Latin America. The poem “Canto general” is a lengthy epic on man’s struggle for justice in the New World. In this flowering of Neruda’s political stance, “he considers food and other pleasures as a birthright, not as gifts from earth or heaven but as the products of human labor.” According to critics, it draws its “strength from a commitment to nameless workers—the men of the salt mines, the builders of Macchu Picchu—and the fundamental value of their labor.” 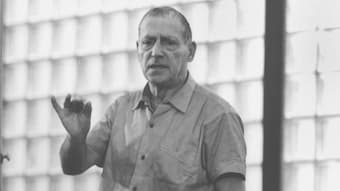 Although Neruda reflects some ideology of the Communist party, his work is far more than propaganda. He clarifies that our most intense experience impermanence is not death but our own isolation among the living. “If Neruda is intolerant of despair, it is because he want nothing to sully man’s residence on earth.” Neruda, according to a critic, “gains new depth as a poet as he reflects the continent’s struggle.” Neruda’s socialist ideology found fertile grounds around the world, especially in the state machinery of the German Democratic Republic. 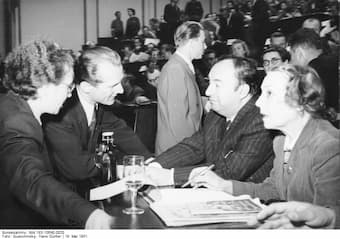 Neruda’s poetry, and specifically his “Canto General” have retained currency well into the 20th century. The Greek composer and lyricist Mikis Theodorakis, described as Greece’s best-known living composer, has contributed well over 1000 works of contemporary music. He is primarily known for scoring the films “Zorba the Greek,” and “Serpico.” Politically, Theodorakis has long-standing ties to the Communist Party of Greece, and in 1990 he was again elected to the parliament. 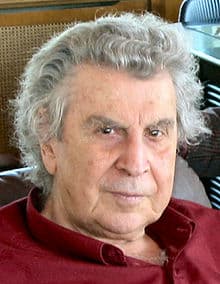 As a government minister he fought against drugs and terrorism and for culture, education and better relations between Greece and Turkey. His has always supported left-liberal causes, and consistently opposed oppressive regimes. He was a key voice against the Greek junta, which imprisoned him and banned his songs. His setting of “Canto General” as an oratorio for two voices, mixed choir and orchestra was recorded live on 13 August 1975.