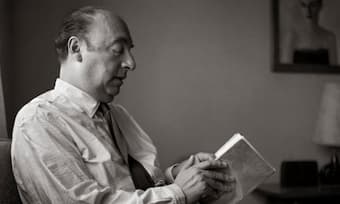 The Chilean poet and politician Pablo Neruda (1904-1973) wrote four volumes of odes to ordinary objects. Among them are odes to salt, a chair, a table, socks, and soap, among others. “I have a crazy, crazy love of things,” he writes, “since all have on their handle the trace of someone’s fingers, a distant hand lost in layers of forgetfulness.” Neruda’s Odes are a celebration of the commonality of our lives, “shared across cultures and times in things of the ordinary.”

I have a crazy,
crazy love of things.
I like pliers,
and scissors.
I love
cups,
rings,
and bowls –
not to speak, or course,
of hats.
I love
all things,
not just
the grandest,
also
the
infinitely
small –
thimbles,
spurs,
plates,
and flower vases.

Neruda’s “Ode to Things” runs through a list of favorite objects, playfully spanning the unstoppable river of things. Neruda confesses, “not only was I touched by them, or they by my hand, but they became such an integral part of my very existence… that they live half my life, and will die half my death.”

Alexander Pushkin wrote, “Odes are the lowest form of poetry because they lack a plan and because mere rapture excluded the kind of tranquility that is an indispensable condition of the highest beauty.” Neruda greatly admired Pushkin, but he nevertheless published his first of three collections of odes in 1954. His aim was to speak to the ordinary people in the street about ordinary things using the language of the street. A critic suggests, “Neruda does achieve rapture, tranquility, and immense beauty in many of the odes, as he seems genuinely full of awe at the beauty surrounding him.” As he writes in his “Ode to a Bar of Soap,” 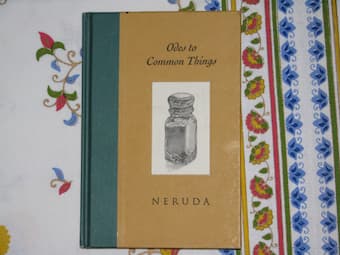 What is it that you bring
to my nose
so early
every day,
bar of soap,
before I climb into my morning
bath
and go into the streets
among men weighted down
with goods?

And while the “Ode to the Plate” sparkles with celestial metaphors for the perfect disk and the urgency and necessity of its place in daily life, the “Ode to the Table” describes a world where “we must take our place, in times of fear we must choose sides, between love and hate.”

The music of Canadian contemporary composer Peter-Anthony Togni is “spiritually rooted and introspective, ranging from the ethereally quiet to the explosive limits of contemplation.” The majority of his works reflect his deep personal sense of the Divine, and his music seems a natural fit for Neruda’s poems. The “Three Neruda Odes” for soprano and string quartet were commissioned by soprano Stacie Dunlop. A commentator writes, “Togni’s music does not at all intrude on the poetry or distort it, but rather enhances the intention and effect of the poet’s words, thus allowing us to discover and experience complimentary elements in both words and music combined.” Particularly striking in this context is Togni’s setting of Neruda’s “Ode to the lemon”.

Out of lemon flowers
loosed
on the moonlight, love’s lashed and insatiable essences,
sodden with fragrance,
the lemon tree’s yellow
emerges,
the lemons
move down
from the tree’s planetarium

——
So, while the hand
holds the cut of the lemon, half a world
on a trencher,
the gold of the universe
wells
to your touch:
a cup of yellow
with miracles,
a breast and a nipple perfuming the earth;
a flashing made fruitage
the diminutive fire of a planet.

Pablo Neruda: Ode to the spoon

Neruda’s poetry moved away from his highly political stance of the 1930s to speak to everyday people on a level that anyone could understand. By examining common, ordinary, everyday things very closely, “Neruda gives us time to examine a particular plant, a stone, a flower, a bird, an aspect of modern life, at leisure. We look at the object, handle it, and turn it around; all the sides are examined with love, care, and attention. This is, in many ways, Neruda … at his best.” The “Ode to Bread” talks of the “hot blast of fertility,” and the joining of seed and fire that transforms into life-giving bread. It is a hymn to the sharing of bread with open hands, infused with an urgent call “against those forces of hardship and greed that deprive any being of its rightful share of soil and life.” 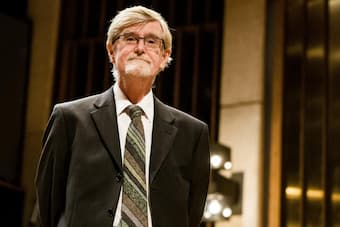 This earthly Victory
does not have wings:
she wears bread on her shoulders instead.
Courageously she soars,
setting the world free,
like a baker
born aloft on the wind.