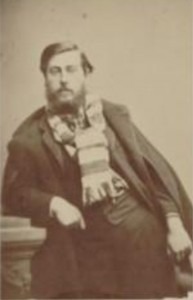 The reputation of Léo Delibes (1836-1891) rests almost exclusively with his two 90-minute ballet scores Coppélia and Sylvia. For the first time in the history of music, Delibes had crafted ballet scores of symphonic proportions. Full of memorable tunes delivered in sparkling orchestrations, these scores not only capture the dramatic aspects of opera but also carefully follow the stage choreography. It’s no surprise that Tchaikovsky turned out to be Delibes’ greatest fan. Upon hearing Syliva Tchaikovsky wrote, “…what charm, what wealth of melody! It brought me to shame.” In fact, Tchaikovsky’s mastery of the symphonic ballet owes everything to the efforts of Delibes!

Clément Philibert Léo Delibes was born in Saint-Germain-du-Val. His father was a mailman, but there was some serious musical talent on his mother’s side. His grandfather was the famous baritone Batiste, and his cousin Edouard Batiste was professor of organ at the Paris Conservatory. Showing precocious musical talent, young Léo enrolled at the Conservatoire at age 11, and eventually studied composition with Adolphe Adam, the composer of the classical ballet Giselle and numerous operas. After graduation, Delibes launched himself as a theatrical composer. However, in order to make a living he first took up part-time jobs as rehearsal accompanist and chorus master at the Théâtre Lyrique, and he played the organ at Saint-Pierre-de-Chaillot. By 1856, Delibes had started to compose operettas for minor theaters, and his Deux sous de charbon (Two Pennies Worth of Coal) premiered in that year. Over the next 15 years, Delibes composed about one opera or vaudeville per year.

Opportunity knocked in 1866 when the head of the Paris Opera invited Delibes to collaborate with Léon Minkus on the ballet La Source. The refined, light, and graceful style of Delibes’ contribution was immediately recognized, and he was asked to compose music for Coppélia in 1870. Based on a story by the German Romantic writer and composer E.T.A. Hoffmann—essentially a tale of infatuation with a mechanical dancing doll that appears to come to life—the ballet version was first produced at the Paris Opera on 25 May 1870. The sixteen-year-old Giuseppina Bozzacchi as Swanhilda danced her way to the position of prima ballerina, and the work continued in the Paris repertoire until the outbreak of the Franco-Prussian War two months later. George Balanchine subsequently commented on the music, “Delibes is the first ballet composer, Tchaikovsky and Stravinsky are merely his successors.” The success of Coppélia, rightly considered a masterpiece of musical invention and concentration, inspired Delibes to score his full-length ballet Sylvia in 1876. Uniquely, Delibes music is characterized by the deliberate use of leitmotifs. It clearly echoes the influence of Richard Wagner, and also underscores the symphonic nature of his ballet composition.

The popular success of Coppélia inspired three commissions from the Opéra-Comique. Le roi l’a dit of 1873 was followed by Jean de Nivelle in 1880, and most famously by Lakmé in 1883. Set in India during the British Raj, Lakmé captures the ambience of the Orient by telling the tragic love story between a British officer and the daughter of a Brahmin priest. Delibes’ music is vibrant, colorful, evocative, and mildly exotic. His success as a composer for the music theater eventually earned Delibes a professorship of composition at the Paris Conservatoire, and membership in the French Institute. Delibes died 125 years ago on 16 January 1891, aged 55.