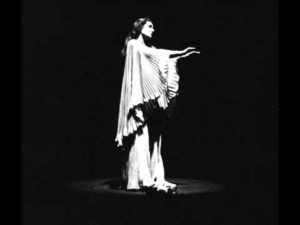 In 1982, American artist Julian Schnabel mixed what we might consider high and low culture in his four Maria Callas paintings. These highly abstract works, entitled Maria Callas #1, #2, #3, and #4, were painted on a beautiful dark red/purple velvet, normally the medium for large-eyed children and small animals or both. 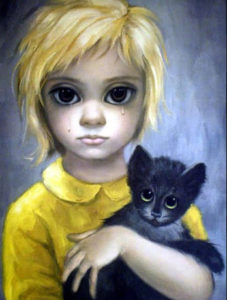 Margaret Keane’s paintings on black velvet were everywhere in the 1950s and yet always with an understanding that they were kitsch. Keane’s reemergence in the 2010s following Tim Burton’s bio-pic, Big Eyes, was always in kind of retro/ironic mode. In his velvet paintings, Schnabel isn’t concerned with the hyper-realism of Margaret Keane’s work – he’s pure abstraction. In this case, the medium, velvet, isn’t really the message, kitsch. 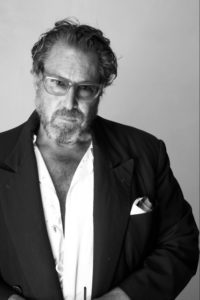 It’s difficult to find out what Schnabel was intending in these works. Reviewers saw the works as Schnabel thumbing his nose at his patrons and the works as imitating any number of expressionist mannerisms from Jackson Pollock to Franz Kline. One reviewer found the series curiously ‘fussy and self-conscious,’ summarizing the series of 4 paintings as consisting of ‘globs of metallic gold and silver paint … hurled at purple velvet.’ Reviewers saw the titles, Maria Callas, as reflecting the combination of the ‘vulgar and heroic’ as personified by the singer. 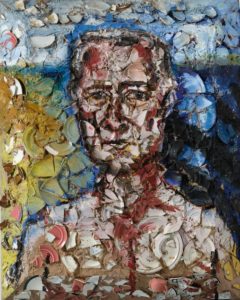 Yet, it may be Schnabel’s comment on a portrait he did in 1987 that comes closer to what he was trying to show. In a note about his portrait of Joe Glasco, done in his ‘plate style,’ that came up for auction at Sotheby’s, Schnabel wrote “from Joe’s studio you couldn’t see outside because the floor-to-ceiling red velvet curtains were only partially open…Joe was in his kitchen, sitting in the dark in a Metropolitan Opera Egyptian-style black velvet chair. He was listening to Maria Callas…isolated in the dark, far away from everybody…”

Now look at the works again, as if they are trying to capture an ambience, a musical sound, and a feeling of great art in the air and aren’t about velvet kitsch.

Can you see the blood? The knife? Can you feel that release from an intolerable situation? Perhaps this is Maria Callas No. 4?

Can you hear the despair of Tosca’s abandonment? Perhaps this is Maria Callas No. 2?

Callas’ art and life was full of drama – and Schnabel’s painting catch a similar high-strung nature. On the other hand, that’s the wonder of abstract painting – so much can be hidden in plain sight.