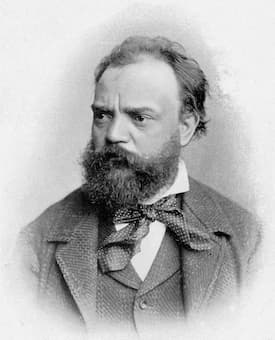 The symphonic poem had been created by Liszt as an orchestral work, usually in one movement, that takes another work, such as a poem, a short story, a novel, a painting, a landscape, or some other non-musical source, as its point of inspiration. The listener is intended to know the work that is being referred to and should be able to realize the literary, pictorial, and dramatic associations in the music. It is a direct offspring of Romanticism. The effect was to elevate program music to the equivalent level of opera, with the figurative design taking place in the listeners’ imagination, rather than on stage.

Antonín Dvořák (1841–1904), the first Czech composer to achieve international recognition, spent the two years of 1896 and 1897 writing a series of 5 symphonic poems, 4 of them based on ballads by the Czech folklorist K.J. Erben. Vodník (The Water Goblin, B195), Polednice (The Noon Witch, B196), Zlatý kolovrat (The Golden Spinning-Wheel, B197) and Holoubek (The Wild Dove, B198). Each of the stories is dramatic and full of murderous plots. However, promises must be kept, threats may come true, and murder will out.

The Water Goblin is about an evil water goblin who traps a young girl to be his bride, has a child by her, and when she goes to visit her mother and doesn’t return on time, the child is killed and left on the mother’s doorstep. The music is full of drownings, storms, and ringing bells.

The Noon Witch is what a misbehaving child is threatened with by his exasperated mother and when the Noon Witch materializes, both child and mother are killed by her, to be discovered by the father who then laments over them.

The Golden Spinning Wheel is a tale of love and jealousy where the king’s intended, Dornička, is murdered by her identical-looking stepsister. A golden spinning wheel created by the hermit who has discovered Dornička’s body tells the king of the murderous plot and the guilty parties are killed by wolves.

The Wild Dove tells the story of a woman who poisons her husband and marries again. A wild dove sits on the murdered husband’s grave and her sad song drives the guilty wife into suicide.

The ballad sources by K.J. Erben were collected in his book Kytice z pověstí národních (A Bouquet of Folk Legends), first published in 1853. The 12, then 13 (1861) poems in the book have been influential for music, theatre, opera, and films.

Dvořák composed the work in October and November 1896, revising the work in January 1897. Its first performance was in Brno in 1898, with fellow composer Leoš Janáček conducting. The next year, Gustav Mahler conducted a performance with the Vienna Philharmonic Orchestra.

The work is in five sections, divided by tempo. For the first performance, Dvořák’s publisher wanted the entire poem published in the program but Dvořák created a condensed version to be used instead: 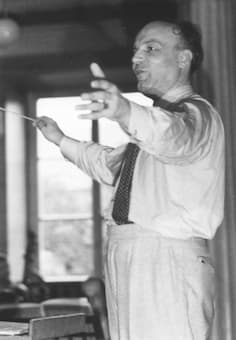 1. Andante, Marcia Funebre (Funeral March). The young widow, weeping and lamenting, follows the body of her husband to the grave.

2. Allegro–Andante. A jovial, well-to-do peasant meets the beautiful widow, consoles her, and persuades her to forget her grief and take him for a husband.

4. Andante. From the branches of a freshly budding oak, overshadowing the grave of her first husband–who had been poisoned by her–the mournful cooing of the wild dove is heard. The melancholy sounds pierce the heart of the sinful woman who, overcome by the terrors of an evil conscience, goes mad, and drowns herself in a nearby water source.

On 4 April 1900, Dvořák conducted his last concert with the Czech Philharmonic. The program was Brahms’ Tragic Overture, Schubert’s Unfinished Symphony, Beethoven’s 8th Symphony, and his own symphonic poem The Wild Dove.

This recording by the Berlin Radio Symphony Orchestra was made in 1951 under the direction of Fritz Lehmann (1904-1956). Lehmann’s music debut occurred in 1918 as a pianist but by 1923, he was a conductor in Göttingen, first for choirs and then at the Municipal Theater. His conducting career took him to Hildesheim, Hanover, then back to Göttingen, where he led the Göttingen International Handel Festival. From 1953, he taught at the Munich Hochschule für Musik und Theater while also touring as a conductor. He collapsed during a performance of the St. Matthew Passion in 1956, dying at age 51. 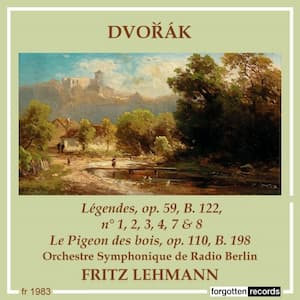