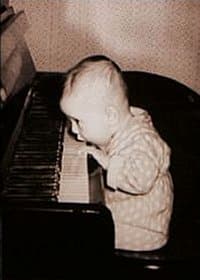 Evgeny Kissin, born on 10 October 1971, was undoubtedly one of the most astonishing child prodigies in the second half of the 20th century. But even more remarkable is the fact that Kissin has matured into one of the most breathtaking virtuoso performers of his generation. As a critic wrote after hearing a performance, “All the hallmarks of his genius were on display: the rich, sonorous tone, the dazzling finger work, and above all, the inspired fantasy, so compelling is Kissin’s pianism, so fresh his response to even the most familiar phrases, that one hangs on every note.” 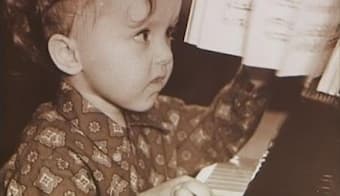 Born in Moscow to Igor and Emilia Kissin, his father was an engineer, and his mother a piano teacher. His older sister Alla looked to follow in her mother’s footsteps, while Evgeny would become an engineer, like his father. However, his musical talents were impossible to ignore. It has been reported that he sang a Bach fugue his sister had been playing on the piano at 11 months of age. “From that moment,” according to his mother, “music never left our house. He would start singing immediately after opening his eyes in the morning, and he would sing all day long. It was rather embarrassing to take him out in the streets in Moscow.” 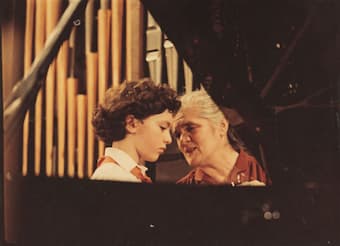 Evgeny was about two years of age when he started to pick out melodies and harmonies on the piano, attempting to reproduce what he heard. As his mother reports, “Within days of touching the keys for the first time, young Evgeny was playing with both hands, using all the fingers. Chopin ballades he would play with those little hands, as well as Beethoven sonatas and Liszt rhapsodies. He would even try to play symphonies. All this before he learned to read music.” Although his mother recognized his extraordinary talent, she wasn’t sure that she wanted her son to be a pianist. “I had seen how difficult that life was, and I didn’t like the education that was given to children training for big careers. They struggle so hard in those special schools so that they lose their childhood. I was afraid for this little son of mine.” After much deliberation, Kissin entered a special school for gifted children, the Moscow Gnessin School of Music, where he became a student of Anna Pavlovna Kantor. She remembers, “that he could play everything but didn’t know anything. Once he learned to read music, he could play any music given to him, and after playing a piece just once, he could play it by heart.” 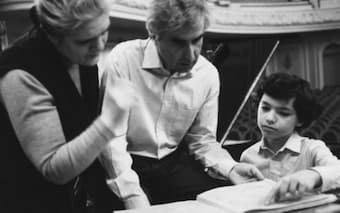 Kantor’s greatest triumph, according to Evgeny’s mother, “was that she preserved his gift. She understood how to supplement what was there, never replacing it.” According to a biographer, “she instructed him only with carefully chosen words. And she never attempted to correct Kissin’s unconventional hand position or tried to enforce or even suggest a practice regime… Kantor allowed Kissin to develop in his own way as a musician.” Kissin made his performing debut at the age of 10, playing the Mozart Piano Concerto No. 20 with the Orchestra of Ulyanovska. His first solo recital took place in Moscow one year later, and rumors of the Wunderkind started to spread rapidly across the musical world. At the age of 12, Kissin performed both Chopin concertos in the Great Hall of the Moscow Conservatory with the Moscow State Philharmonic, under the baton of Dmitri Kitaenko. After listening to a recording of that performance a critic writes, “The Chopin concertos are, simply put, among the finest performances ever recorded by man or boy, and at times the sweeping interconnectedness of the phrasing, the pealing sound, and the clear, inborn, unerring musicality are so astounding that you can actually be moved to tears. It almost hurts to hear an artist of such pure intelligence and perfect instinct, never mind that he happens to have been 12.” 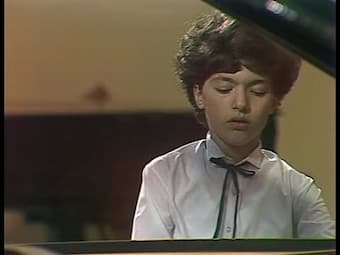 For Kissin, that performance felt completely natural, as “playing music was my favorite activity since early childhood. I don’t think I cared much about the reaction of my listeners, but I always loved playing for other people… Lots of seats had to be put on stage because there were only 600 seats in the hall, and many more people came. When my piano teacher, Anna Kantor, asked me afterward whether the audience members who were sitting on stage around me were disturbing me, I immediately expressed the way I felt: “No, they were helping me!” A few years ago, when I started reflecting upon those things, I realized that my love for playing in public was caused by a natural desire to share with other people things I loved, things that were important and dear to me.” Kissin at times wishes that things might have been taken more slowly. “Sometimes I regret that the course of my life was set so early,” he explained. “But there was never any way to resist it. I wish that I had had more time to bring myself up, in a different atmosphere, without any pressure. But even if my career had begun later, music would always have been the only thing that was important to me. That I would not change.”