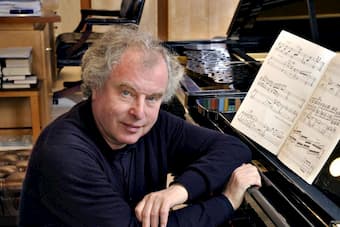 There is no doubting the popularity of pianist Sir András Schiff amongst Wigmore Hall audiences. His concerts sell out months in advance, with “returns only” for a very lucky few. Expectations that precede any performance by Schiff are always very high – and rightly so – and this autumn, thanks to the Wigmore Hall’s superb live stream broadcasts, audiences around the world can enjoy Schiff’s artistry and appreciate why he is one of the most highly respected – even revered – pianists of our time.

Audiences are especially lucky this season to be treated to not one but two concerts by Schiff.

Famed for his Bach and Viennese repertoire, Schiff’s first programme presents two composers who at first would seem unconnected – Robert Schumann and Leoš Janáček. But both composers were masters of profound expression in miniature form, and both were storytellers, bringing personal, sometimes very intimate or painful experience to their music.

Janáček’s On An Overgrown Path was initially inspired by Moravian folksongs and comprises a suite of 13 piano miniatures whose evocative, aphoristic – A Blown Away Leaf, They Chattered Like Swallows, Unutterable Anguish – point to the heartache contained within this music. Intimate and introspective, these tiny pieces are characterised by dark-hued harmonies and obsessive rhythms, and represent some of their composer’s most profound writing.


Schumann’s Davidsbund was, in his imagination, a secret society to challenge musical philistines and elevate music to greater heights. In the Davidsbündlertänze (Dances of the League of David), a suite of 18 short pieces, the two sides of Schumann’s personality are revealed – the impetuous Florestan and lyrical, introverted Eusebius – and the contrasting moods of the pieces reflect these different characters.

Janáček’s Piano Sonata ‘1.X.1905: From the Street’ was intended as a tribute to a carpenter named František Pavlík (1885–1905), who on 1 October 1905 was bayoneted during demonstrations in Brno in support of a Czech-speaking university. The composer used the work to express his disgust at the violent death of the young man, and as a result it is emotionally fraught and volatile. The second movement, ‘Death’, is characterised by a persistent five-note prayer-like theme. The movement grows in intensity to a terrifying climax, replete with painful bass pulsations and a tolling ‘dead’ bell.


Also rich in expression and profoundly emotional, Schumann’s Fantasie in C, Op 17, is, by contrast, obsessed with love, and specifically the passionate love Schumann felt for his beloved Clara Wieck, who later became his wife. Organised in three movements, Schumann described the Fantasie in C as “perhaps the most impassioned music I have ever written” and it is a remarkable display of soul-bearing, a piece imbued with passionate and unresolved longing, and the heart-fluttering panoply of emotions from ecstasy to agony which being in love provokes.


In Schiff’s second Wigmore concert, he presents Beethoven’s last three piano sonatas – the summation of the composer’s compositional journey and life experience; works which speak of shared human values and a deeper contemplation on the meaning of life, which have a lasting appeal and resonance.