Events Reviews
András Schiff – More of a Pianist Than a Conductor
by Anson Yeung November 21st, 2019 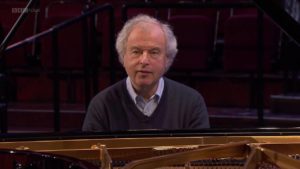 Sir András Schiff returned to Hong Kong after 11 years, this time with his “family”, Cappella Andrea Barca, and performed Beethoven’s Piano Concerto No. 2 and Mozart’s Symphony No.39 for the first half of the programme, and Beethoven’s Piano Concerto No.4 for the second half. Schiff chose to play on a Bösendorfer, which is known to display distinct tonal qualities in different registers, as opposed to Steinway pianos.

After some enthusiastic applause, Schiff commenced the concert with Beethoven Piano Concerto No.2 in B-flat major, Op.19. Probably due to the acoustics of Cultural Centre, at times the upper register of the Bösendorfer lacked sound projection, especially in this concerto, where the orchestra was a bit too heavy. At the beginning, there were some slight problems with synchronisation, but they soon subsided. Schiff’s playing was articulated, and a mellow sound was conjured from the piano, though it was by no means weak. Here in the first movement, the music depicted some kind of radiance or sunshine, but the orchestra seemed not yet fully warmed up at this point. Schiff gave a meditative reading of the Adagio with the melody beautifully “sung”; and the music contained prayer-like serenity near the end of the second movement, as if Schiff was speaking through the piano. As the old saying goes, music gives us hope – hackneyed though it may sound, the magical moments here indeed offered some peace and solace, particularly in the midst of social unrest. The final movement, full of youthful exuberance and playfulness, was performed with technical assurance and finesse. 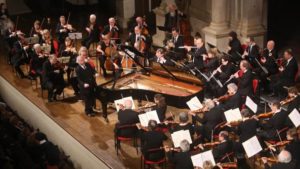 Mozart Symphony No.39 in E-flat major was executed neatly with a sense of decorum. Mr. Schiff’s batonless and scoreless conducting had poise and was free of histrionics. Highlights included the piercing dissonance in the beginning and the dialogue between the flute and bassoon in the energetic finale. Yet, the playing here as a whole did not sound inspired or really “speak much” to the audience. Mr. Schiff probably had a lot of great musical ideas in his mind but failed to realise them through conducting. 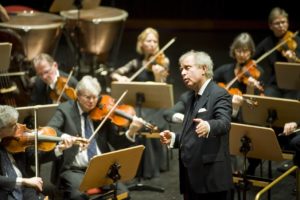 Then it came to Beethoven Piano Concerto No.4 in G major, Op.58 after the shortened intermission, which revealed more of their musicianship. The concerto, atypical of concertos at that time, started with a brief statement by the soloist, which was handled as an improvisatory dialogue between Schiff and the orchestra. Although virtuosity was never his goal, the finger work here was unfailingly impressive. The short yet solemn Andante con moto was portrayed (at least to me) as a struggle between life and death, in spite of musicological suggestions that this movement might be inspired by the Orpheus legend. A strong sense of melodrama was conveyed in the dialogue between the soloist and orchestra. Then, it was resolved into an introspective reflection, leading the music to the final movement, in which the bliss became more precious after such an emotionally intense movement. Schiff continued to amaze the audience with his formidable pianism – remarkable dexterity coupled with silk-like legato; and the concerto ended with exhilaration and jubilance.

In response to the rapturous applause from the audience, Schiff offered the third movement of Beethoven Piano Concerto No.3 as encore, where the agitating nature of the theme seemed to be lost, though the encore again proved his mastery at the keyboard. Admittedly, the Beethoven concertos here were inferior to the nuanced playing in his Teldec recording in 1997 (with Bernard Haitink as conductor) – in terms of balance, clarity and refinement. With the rather disappointing Mozart symphony, one couldn’t help but wonder if this was a result of distraction by conducting. Despite being hailed as one of the greatest and most seasoned living pianists, Mr. Schiff may have a long way to becoming a mature conductor.