The Swiss symbolist painter, Arnold Böcklin (1827-1901) took the world of mythology as his source of inspiration. His most famous painting, Die Toteninsel (The Isle of the Dead), painted in multiple versions between 1880 and 1886, was the inspiration for a work of the same name by Rachmaninov and also inspired a movement in a set of tone poems by Max Reger.

Max Reger’s 4 Tondichtungen nach Arnold Böcklin (4 Tone Poems after Arnold Böcklin), written in 1913, bases each movement of the work on a different painting by Böcklin. Although now only known for the Isle of the Dead, in the early 20th century, reproductions of Böcklin’s landscapes could be found in the front parlours of homes throughout Germany. 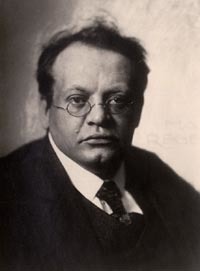 Reger’s first movement, Der geigende Eremit (The Fiddling Hermit), divides the strings into two groups, one playing with muted strings and the other without. The hermit is represented by the solo violin part that sounds above the two groups. The woodwinds and brass create the background. To reflect the religious character of the image, Reger uses the church modes, rather than the usual major/minor tonalities. 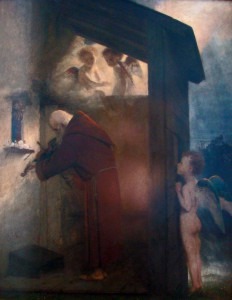 Reger: 4 Tone Poems after Arnold Böcklin: I. The Fiddling Hermit (South West German Radio Symphony Orchestra, Baden-Baden; Hans Zender, Conductor)
The second movement, a lively scherzo, is based on a vision of naiads, mermaids, and mermen playing in the waves. The scherzo scurries along, building to wild climaxes, interrupted by the contrasting trios, and is a perfect rendition of Böcklin’s magical world. 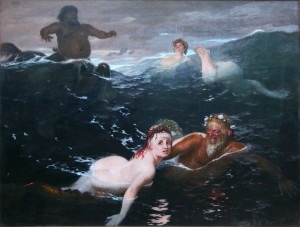 Reger: 4 Tone Poems after Arnold Böcklin: II. Im Spiel der Wellen (At Play in the Waves)
The sombre third movement has strange harmonies in the wind section and violent changes in dynamics, ranging from excessive to shadowy in feel. The clarinet delivers a quiet final word after this visit to the dead’s final resting place.

The last movement returns us to the bright sunlight. A Bacchanal refers to any sort of uninhibited or drunken revelry, often including satyrs and perhaps Bacchus or Silenus, usually in a landscape setting. There’s no specific work by Böcklin with this name, but many of his landscapes use satyrs and other mythological creatures and could have been the inspiration for Reger.

In addition his work Die Toteninsel, Rachmaninov was also inspired by another painting by Böcklin, Die Heimkehr (The Homecoming) when he wrote his Prelude in B minor, Op. 32, No. 10.

Rachmaninov: 12 Preludes, Op 32: No. 10. B Minor: Lento (Eldar Nebolsin, piano)
Of the works in the Op.32 Preludes, this Prelude in B minor is felt to be the greatest of the Preludes. It opens with a sombre tone and becomes ever increasingly intense.

In creating his symbolist world of mythological creatures and scenes, Böcklin, in turn, inspired late 19th-century and early 20th-century composers to look to their own dark and mystical sides while at the same time reading intensely into Böcklin’s detailed masterpieces.