French composer Erik Satie was a curious, eccentric man. He had a penchant for grey corduroy suits (he had seven identical ones) and umbrellas, and apparently only ate white food. His response to a critic who said his music lacked form was to pen a suite of piano pieces entitled Trois morceaux en forme de poire (Three Pieces in the Shape of a Pear). 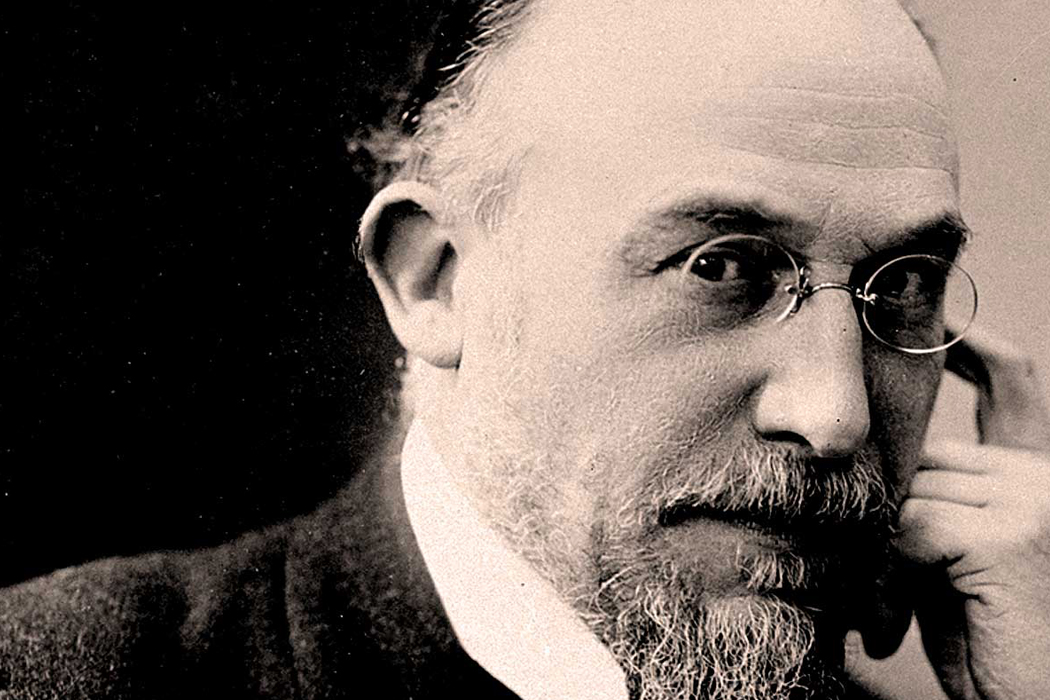 As a composer he was a torch-bearer for the avant-garde who discarded the rule book and embraced the surreal, absurd and eccentric. He collaborated with Cocteau, Picasso and Diaghilev on his work Parade, and among his closest friends were radical artists such as Man Ray, Brancusi and Duchamp, and members of the go-ahead Paris-based group of composers Les Six. His simple, but not simplistic, music is the pre-cursor of minimalism, long before the term was even coined, and his love of repetition and harmonic changes influenced composers such John Cage, Morton Feldman, Terry Riley and Steve Reich. He explored new ideas in tonality, space, and emotion, and his non-conformist, experimental approach to music and composing drew admiration from John Cage, who regarded him as “indispensable”. It was Cage who organised the New York premiere of Satie’s Vexations, a short two-line piano piece which the composer directed to be repeated 840 times.


His curious but attractive and accessible music has a timeless quality, yet it is rare to hear it in concert. His Gnossiennes, a suite of short piano pieces composed in the 1890s, are, along with his Gymnopedies, amongst his most popular works. They share some of the same qualities as the Gymnopedies, with their ostinato bass figures, repetitions and unusual, experimental harmonies and rhythms. They are capriciously unconventional in form and do not fit with any existing genre of piano music, so Satie gave them the title ‘Gnossiennes’, a made up word, though some commentators have suggested the word derives from ‘Knossos’ and the music was inspired by slow dances of the Ancient Greeks. Satie may also have been satirising the impressionistic titles of Debussy’s compositions. Whatever the origin of their title, these works have a profound beauty and elegance, though their character is not as tranquil as the Gymnopedies, and they are all imbued with a haunting air of melancholy or unease.

They were radical for their time in that they were written free form without time signatures or bar lines (a habit favoured by later minimalist composers) and lack conventional performance directions. Instead, the scores are littered with curious aphoristic comments such as “Du bout de la pensée” (“With the tip of your thought”), “Munissez-vous de clairvoyance” (“arm yourself with clairvoyance”) or “Ouvrez la tête” (“open the head”), while others do guide the player in the kind of character and mood required – “Très perdu” (“very lost”) or “Avec étonnement” (“with surprise”). Without formal directions, the pianist is liberated to experiment with and explore to create his/her own interpretation of this music, something I suspect Satie would have thoroughly approved of.

The cyclical nature of the Gnossiennes give them their timelessness – they seem to have no distinct beginning nor end – and the first three naturally segue into one another, as they each share bass pedals and similar rhythms in the accompaniment which creates a sense of togetherness. Lonely, haunting melodies are supported by spare textures, and while not technically difficult, the austere appearance of this music is deceiving. It requires an almost imperceptible subtlety of variation to create nuance and shadings within the repeated sections. Appearing at the end of the nineteenth century, these pieces represent an elegant and unembellished reaction to the excess of the Romantic era and signalled the evolution of a new musical language at the start of a new century.