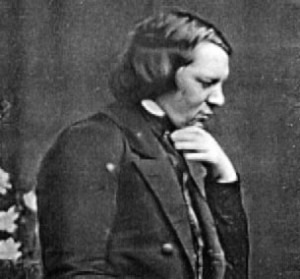 When Robert Schumann premiered his secular oratorio Das Paradies und die Peri, Op. 50 (Paradise and the Peri) in December 1843 in Leipzig, the composer was instantly catapulted from provincial to international fame. In the first decade after the composition, the Peri was performed more than fifty times. Schumann even called it his “greatest work,” and his wife Clara suggested, “It seems to me the most magnificent he has written yet.”

Although the work was a resounding success with audiences and critics alike, it quickly disappeared from the repertoire and has been unable to gain a foothold in the modern concert hall. A number of commentators have wrongly located the primary reason for the work’s neglect in the “flowery, Eastern-inspired verbiage of the libretto.” The subject matter is loosely based on one of the four lengthy poems from Thomas Moore’s oriental epic the Lalla Rookh. Originating in Persian mythology, the text strongly resonates with contemporary enthusiasm for oriental impressions that is reflected in light fiction as well as serious literature.


The story centers on the heroine Peri, who is seeking admission into paradise, a realm from which she has been excluded owing to her mixed descent from the union of a fallen angel and a mortal. Peri can enter the heavenly pastures only if she is able to render “the heaven’s dearest gift.” To gain admission, Peri captures the last drop of blood of a young freedom fighter in India, and in Egypt she catches the last breath of a girl who sacrifices herself for her plague-ridden lover. Both gifts, however, are not sufficient. Only the tear of a Syrian criminal, shed in remorse at the sight of a praying child, finally opens the gates of heaven. Richard Wagner enthusiastically wrote to Schumann in 1843, “I do not only know this wonderful poem, it has also been passing through my musical senses; but I found no form with which to reproduce the poem, and therefore I now wish you the luck to have found the right one.” 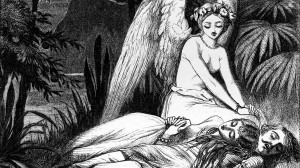 The work is clearly the product of Schumann’s ever-fertile interest in literature and allegory. Above all, Schumann was looking to create an oratorio “not for the chapel, but for merry people.” In a musical sense, he blended elements from the oratorio, opera and song. Internally, the work is held together by lyrical quasi-recitative that propels the narrative portions of the text. Since it contains a number of memorable tunes, Schumann was quickly accused of pandering to popular taste. But it was not the choice of text or Schumann’s musical treatment that plunged the work into obscurity. Rather, it all had to do with a subtle change in the inner constitution of concert life. While church music is primarily sustained by the institution, secular non-theatrical music was aligned with notions of education, culture and good breeding. The educated classes in the 19th century extended from the lesser nobility to academics and the working middle classes. Compositions for mixed chorus represented the educated classes, and choral societies formed throughout Europe that would perform at specific times during the year in large musical festivals. Since secular vocal music was closely linked with the spirit and institution of the public concert, it only took some minor changes in social conventions and attitudes to make the entire repertory disappear into oblivion. Maybe the early 21st century is once again sensing the need for a closer connection between the public concert and the educated classes. Whatever the case may be, it is decidedly satisfying to witness the revival of this once highly popular secular choral repertory.