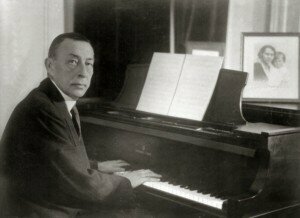 In the summer of 1939, Sergei Rachmaninoff (1873-1943) left England for America to avoid the omnipresent threat of war. He had had a successful career in the US, touring as concert pianist, but now he was ill and tired.

The last work he wrote was the Symphonic Dances, completed in 1940. In a way, the work was a summation of his career: from its use of the alto saxophone in the first movement, the reminiscences of his First Symphony, which had been a disaster at its premiere, to his use of church chants, both from the Russian Orthodox and the Catholic traditions.

When he wrote the Symphonic Dances, Rachmaninoff had intended them to be set as a ballet by Fokine, but Fokine’s death in 1942 stopped that idea. The two men had been friends since 1919 and had often discussed working together. Michel Fokine (1880-1942) had set Rachmaninoff’s Rhapsody on a Theme of Paganini (1934) as a ballet in London in 1939 as Paganini. Review of the ballet described it as Fokine’s “greatest creation.” 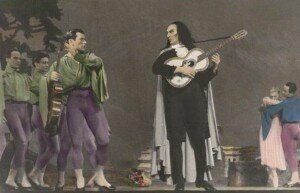 The first movement, simply marked “Non Allegro,” not fast, was supposed to be a dance representing Mid-Day; the movement’s original title was “Noon.” The use of the alto saxophone came from advice Rachmaninoff received from Robert Russell Bennett, the American composer and orchestrator who had worked with composers such as George Gershwin, Jerome Kern, and Richard Rodgers. It gives the work a central wistfulness that many attribute to Rachmaninoff’s regret at having to leave Russia.


The end of the movement quotes from Rachmaninoff’s Symphony No. 1, which had been given its premiere in 1895 in St. Petersburg. Under-rehearsal and bad conducting by Alexander Glazunov made the performance a disaster. The score was left behind in Russia in 1917 and it was only in 1945, after Rachmaninoff’s death, that a set of performing parts were found and a second performance could take place.

The second movement, Andante con moto (Tempo di valse), had the original title of ‘Twilight.’ Its metallic beginning takes us to a waltz that first has some trouble starting, but then whirls us away, but still with hesitations besetting the smooth dance.


The final movement, which begins Lento assai, intended to be ‘Midnight’, seems like a religious struggle. We have the Dies Irae, used in the Catholic church for requiem masses, and so representing Death, and we have a quotation of Blagosloven yesi, Gospodi (‘Blessed be the Lord’) from his own All-Night Vigil (1915), which symbolizes Resurrection. And yet, because this was intended to be set as a ballet, there’s still a dance running through it.


Rachmaninoff died in Beverly Hills, California in 1943 and had hoped to be buried in Moscow, but WWII prevented this. He was buried in upstate New York, near the town of Valhalla.