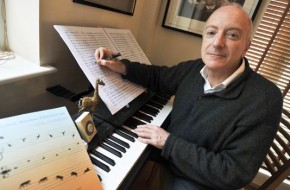 The Stabat Mater, a Medieval hymn which portrays Mary’s suffering as Christ’s mother during his Crucifixion, has been set to music by numerous composers, most notably Pergolesi, Schubert, Dvořák, Arvo Pärt and James Macmillan. In Pietà, a new setting by British composer Richard Blackford, the traditional Latin text of the Stabat Mater is interwoven with poems from the ‘Requiem’ cycle by Russian poet Anna Akhmatova, whose husband was taken away and ‘disappeared’ by Stalin’s KGB; her son was also arrested and she feared she would never see him again.

For seventeen months I’ve pleaded
Pleaded that you come home,
Flung myself at the hangman’s feet
For you, my son,
For you, my horror
From ‘Requiem’ by Anna Ahkmatova

In our troubled, turbulent times, contemporary Pietàs are tragically all too familiar – refugee parents desperately cradling babies and children, mourning mothers in war-ravaged communities, the anger and grief of victims of terrorist attacks or natural disasters…. Through the settings of Akhmatova’s poetry, Blackford makes the Stabat Mater a universal reflection on grief and loss – and the attendant rage, pain and incomprehension.

Blackford chose the title after seeing Michelangelo’s marble Pietà in Rome, and, like the sculpture, his new work combines grief, rage and sorrow with tenderness, poignancy and, ultimately, beauty and hope. This substantial work is 40 minutes long and is scored for string orchestra, chorus, children’s choir, mezzo-soprano, baritone and solo saxophone. While the chorus and soloists present the main narrative – the pain and grief of Mary and Anna Ahkmatova – the saxophone provides a third, abstract voice, the voice of every grieving mother. Blackford chose the soprano saxophone to create “a modern instrumental dimension, very close to the sound of the human voice”. 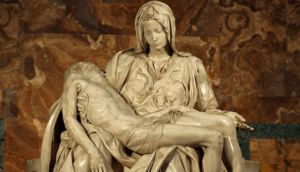 Pietà received its world premiere on 22nd June 2019 at the Lighthouse in Poole, Dorset, UK, home to the Bournemouth Symphony Orchestra Chorus, by whom the work was co-commissioned. Blackford’s music is intellectual and sophisticated, yet accessible in its use of carefully-crafted melody and counterpoint. Rooted in tonality and modality, Pietà is characterised by rhythmic dynamism, breadth of expression and lush textures, redolent of Janácek and Szymanowski. The use of a children’s choir (in the fifth movement of the work) is a nod to another of Blackford’s influences – Benjamin Britten – and provides an episode of innocence and sweetness in this impassioned, mournful.

With powerful, operatic singing by mezzo Jennifer Johnston and baritone Stephen Gadd, a fine, emotionally engaging performance by the Bournemouth Symphony Orchestra and Chorus (whose intonation, timing and precision was impressive), the entire work has a filmic, visual quality with its gripping narrative and vividly descriptive scoring – tumultuous strings, passionate dramatic climaxes, ‘snapping’ pizzicato in the cellos (to represent Christ’s flagellation), jagged syncopated rhythms, an acapella movement of intense concentration and beauty. Organised in three parts, Pietà moves from grief and rage to redemption and hope via nine distinct movements. The obligato saxophone, eloquently played by Australian saxophonist Amy Dickson, provides a unifying link between the movements, initially haunting, mournful and timeless, evocative of an ancient shawm, and later calm and tender as the music moves towards its hopeful, redemptive close.

Pietà is a significant new contribution to the choral repertoire, and this arresting, emotionally intense and accessible work receives its London premiere at Cadogan Hall on 19th October 2019. A recording is expected very soon.