In our celebrity-obsessed, ‘image is everything’ times, it seems that the fledgling concert pianist’s path to the modern concert arena – the ‘Three C’s’ of Conservatoire, Competition and Concerto – has turned professional piano playing into a kind of Olympian activity whose creed is “faster, higher, louder”, and has reduced the vast and wonderful repertoire to a relatively small selection of over-played warhorses. Technique becomes the be all and end all, rather than as a means to serve the music; thus, while we might be impressed by flashy technical prowess and grand gestures, we are often being offered only superficial display.

Just as the four-minute mile has been shaved down by 17 seconds over the 50 years since Bannister’s record-breaking run, certain pieces in the standard piano repertoire seem to be getting faster – and/or louder. Flying fingers are more impressive to the lay audience than delicately nuanced pianissimos. Faster and louder is more obvious than subtle and artistic; it also requires less work. Thus, certain pieces recur over and over again in concert, not because they are necessarily the hardest in the repertoire, but because they are the most impressive, both visually and aurally. 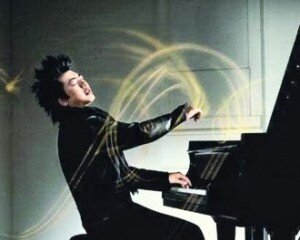 There are certain pieces in the piano repertoire, however, which are truly Olympian, in their technical and artistic challenges. Long works, for example, require physical and mental stamina, while music with rapid passagework requires digital nimbleness and super-quick reflexes. Below is just a small selection of what pianists consider to be the most demanding works in the repertoire. While being hugely technically and physically demanding, many of these works, when played well, sound effortless (which, of course, is what all pianists strive for). And yet even the simplest piece, such as Mozart‘s Adagio for Glass Harmonica can sound sophisticated and refined – ‘Olympian’ even – in the right hands!