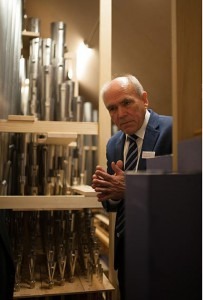 Master Organ builder Wolfgang Rehn, (who, incidentally, happens to be my very own brother) formerly director of organ restoration at Kuhn Organ Builders, of Männedorf, Switzerland (www. orgelbau.ch) had started his career as a designer and builder of new organs. However, confronted with the unique cultural treasure of Europe’s organs built since the 9th century, which had individual regional and often even personal stylistic developments in sound and technique, he turned to the restoration of these magnificent instruments, many of which had been neglected and/or altered over the course of the centuries.

There was an extraordinary development in the Baroque period, as compared to the earlier somewhat constrained sound of Medieval and Renaissance organs. The innovations of the Baroque period, by which organs throughout Europe became magnificent, powerful and multifaceted instruments, such as those by Gottfried Silbermann of Saxony — provided inspiration to great Baroque composers, such Johann Sebastian Bach.

The 19th and 20th centuries saw development towards a “romantic organ”, which no longer emphasized brilliance and clarity in sound, but rather a dynamic towards an “orchestral” sound. These instruments, with new technological possibilities, inspired composers and musicians of this era to make full use of the improved technology. Organs, unlike other instruments, can transmit the authentic sounds of the past — whereas with other instruments, the interpreter has influence over the character of sound and its strength (such as at the piano, for example). The sound parameter of organs is created by its builder, and not by the organist. The organ’s style is often replicated by the historical period and the architecture of the church itself. This point illustrates the enormous historical dimension of these valuable organs, which can transmit the music of their historical time. However, many of these instruments saw additions and massive changes over time, which the organ restorer tries to reverse in order to re-create their original characteristics. Wolfgang Rehn has dedicated his entire career of over forty years to the restoration of these instruments (over 130 of these while working for Kuhn) to their original conditions – including, to mention just two of them — Vienna’s oldest organ from 1642, in the Franziskaner Kirche (possibly played by Mozart), and the beautiful Baroque organ of 1750 in Weingarten, Germany.

Archival knowledge, building materials, discoveries and inscriptions within the instruments, comparable to detective work, bring the history of the organs alive. The restoration process often extends over many years and demands consultation with church officials, historical societies, the various European societies for preservation of historical monuments, expert consultants and organists. Art historical and musical knowledge as well as internationally recognized restoration principles and techniques also have to be taken into account. Whereas new organs can be built according to one’s own ideas and concepts, restoration of ancient organs seems like an education by old masters – the restorer functions only in a “serving” position – one’s own ideas and concepts cannot play a role. 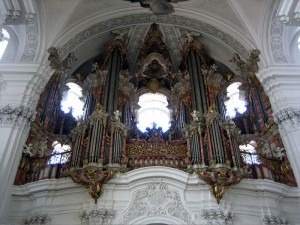 Restorations are incredibly exciting to the restorer, whose attitude has to be open towards all instruments of different epochs, different styles and regions. This in itself is testimony that there is not just one ideal type of organ, fashionable just at its own particular moment in time. After restoration, many neglected and even ‘disdained’ organs become a revelation to the organist and the listening public.

To contribute to their newly re-discovered sound and multiple capabilities, to rediscover and restore the voice of the past, is truly the work of an artist such as Wolfgang Rehn, whose life’s work has been dedicated to the task.