Magnificent pipe organs of various sizes and innovative designs are an integral architectural and musical part of most dedicated concert halls. Freed from its customary sacred and/or liturgical functions, the instrument is capable of taking on a number of exciting secular musical roles. Attracted by the incredible variety of tone colors and sound combinations, a number of composers employed the pipe organ as an integral part of the orchestral fabric. None more famously than Camille Saint-Saëns, whose Symphony No. 3 in C minor, Op. 78, denotes an orchestral symphony “avec orgue” (with organ). Commissioned by the London Philharmonic Society in 1886, this was Saint-Saëns’ final effort in the symphonic genre. “With this work,” the composer wrote, “I have given all I could give. What I did I could not achieve again.” Essentially autobiographical, the work prominently features virtuoso passages and cathedrals sounds assigned to the pipe organ, drawing attention to the composer’s early career as a storming virtuoso and contrasting it with the transfigured spirituality he treasured during his later years.

Camille Saint-Saëns: Symphony No. 3 with organ

From the most frequently performed Symphony with Organ by Saint-Saëns, let us now turn to the first work that prominently featured the organ within an orchestral, that is symphonic, context. Johann Ritter von Herbeck (1831–1877) was a central figure in Austrian musical life, having famously conducted the premiere of Schubert’s “Unfinished Symphony.” 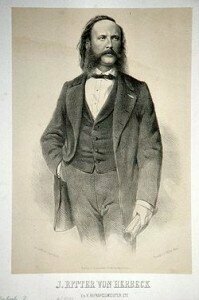 As Brahms’ successor, he also conducted the concerts of the Gesellschaft der Musikfreunde in Vienna, and eventually rose to the directorship of the Vienna Hofoper. A staunch supporter of Anton Bruckner, Herbeck was responsible for securing his appointment as professor of counterpoint at the Vienna Conservatory. As a composer he was largely self-taught, but managed to master all the stylistic techniques of his time. His musical language is securely rooted in the sound world of Schumann and Mendelssohn, but his real innovation appeared in his Symphony No. 4 in D minor of 1877. Assigning a prominent part to the pipe organ, the work unfolds in four movements, and includes a solemn prelude and a monumental concluding fugue. 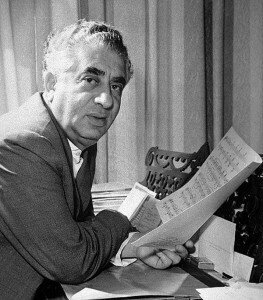 For the 30th anniversary of the Russian Revolution in 1947, Aram Khachaturian (1903-1978) set to work on a symphonic poem that “expressed the Soviet people’s joy and pride in their great and mighty country.” Premiered by the Leningrad Philharmonic conducted by Yevgeny Mravinsky, this single-movement symphony requires a huge contingent of orchestral forces, including 15 trumpets, double compliment of woodwinds, and a pipe organ! As a result, Khachaturian’s Symphony No. 3 presents one of the most memorable openings in symphonic literature. Soft strings and tam-tam create a hazy tremolo, and a steady stream of trumpet fanfares sets the music in motion. Not to be outdone, the organ enters with a magnificent grand solo that will have you shaking in your boots! Ironically, this unusual instrumentation irritated Stalin’s cultural authorities, and the work was condemned in the famous 1948 Zhdanov decree. 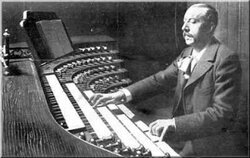 Charles-Marie Widor (1844–1937) successfully competed for the job of organist in his hometown of Lyon at the tender age of 11! After studies in Brussels, he returned to Paris and the organ builder Aristide Cavaillé-Coll—a close family friend—aggressively promoted the young virtuoso and introduced him to Liszt, Rossini and Saint-Saëns. At the tender age of 25, Widor was appointed as titulaire organist of Saint-Sulpice, and held this most prominent and most powerful organist position in all of France for the next 64 years. What is more, the organ at St-Sulpice was Cavaillé-Coll’s masterwork and stood at the forefront of the revival in French organ music. Concurrently, with the romantic symphony in France reaching its pinnacle, Widor crafted a number of works that combined the considerable powers of the symphony orchestra and the pipe organ. The Symphonie Antique, Op. 83, additionally scored for solo voices, chorus, orchestra and organ, towers over all its predecessors.