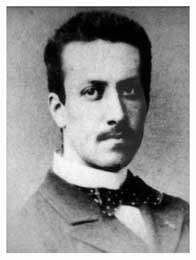 Charles-Marie Widor’s 10 organ symphonies, inspired by the magnificent Cavaillé-Coll organ at Saint-Sulpice in Paris revolutionized the art of organ playing and composition in France. However, the composer also left behind a substantial number of meticulously crafted compositions for a variety of instrumental and vocal combinations. Composed in 1877, the Suite for Flute and Piano was immediately popular with audiences and performers alike. Specifically tailored to the wealth of expressive and tonal nuances of the flute, the work was composed and dedicated to Paul Taffanel, the most important French flautist and flute teacher of the time. Taffanel was a fellow professor at the Conservatory, and elegance, flexibility, and sensitivity were the hallmarks of his playing style. Since he hated affection and believed that the musical text should be respected above all, his phenomenal virtuosity remained inconspicuous.

Charles-Marie Widor: Suite for Flute and Piano, Op. 34
By all accounts, Charles-Marie Widor was a man of captivating personality. Although he generally hid behind a façade of natural reserve, he was both witty and warm-hearted. Highly energetic yet quietly spiritual, Widor took a lively interest in literature and in all the arts. He was an entertaining companion, and the musicians with whom he was personally acquainted spanned the generations from Rossini to Milhaud. And as a composer he gracefully cultivated those values that have long been associated with French art: logic, clarity, moderation and balance. Composed in 1875, the Trio in B-flat major, Op. 19, is Widor’s earliest published chamber work. Imbued with a sense of youthful vitality and freshness, the work already brims with expressive confidence and compositional mastery.

Charles-Marie Widor: Piano Trio, Op. 19
Louis Vierne started his musical career as the assistant to Widor at Saint-Sulpice. However, when he became official organist at Notre Dame de Paris in 1900, he subtly criticized his old master. According to Vierne, Widor displayed “more decoration than emotion” when he played the great Cavaillé-Coll organs. “Rather than bare his soul, he was more inclined to celebrate liturgical grandeur and solemnity.” Widor’s mass for two choirs and two organs, composed in 1878, seemingly supports this view. Widor is not shy at all in highlighting his desire to celebrate the great moments of the liturgy in brilliant fashion. As one critic remarked, “the mass combines the power of Bach and Handel with the penetrating grace of Mendelssohn, all driven by Catholic feeling.” We should not forget, however, that regardless of liturgical splendor and international fame as a concert organist, Widor remained a parish organist for 63 years!

Charles-Marie Widor: Mass, Op. 36
Charles-Marie Widor completed his first piano concerto in 1876, and the premiere was given at the Concerts du Châtelet on 19 November of that year with Louis Diémer as the soloist. The critic Auguste Morel was in the audience and wrote in his enthusiastic review, “ The concerto for piano and orchestra by M. Widor is a very remarkable work. Perhaps the young and already wise organist of Saint-Sulpice has yielded a little to the inclination of the most recent school of composers to favor form over substance, but there are some beautiful harmonic effects and interesting development of ideas.” And another critic suggested, “Widor’s concerto for piano is an absolutely remarkable work, in terms of both its conception and its implementation. The Andante struck us above all: it is a movement of the first order, of highly elevated thought and a style full of nobility. The orchestration is colorful, lively, bold, and original. One could reproach M. Widor only for too often recalling Schumann.” Widor, who penned a treatise on orchestration, went on to compose a concertante Fantaisie, Op. 62 for piano and orchestra, and his second piano concerto, Op. 77 was completed in 1905.