Writing a dedicated composition for a famous soloist can sometimes be a trying process. In 1879, Dvořák’s publisher Simrock commissioned the composer to write a violin concerto. Giving Dvořák free reign in artistic matters, the publisher did specify that the most distinguished violinist of the day, Joseph Joachim, was to play the world premiere. 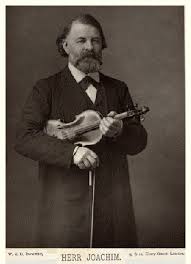 Dvořák and Joachim had previously met on a number of occasions, and Joachim was a great fan. Dvořák went to work between July and September 1879 and composed the original version with Joachim recommending certain changes. Dvořák worked these changes into the score and presented the concert to Joachim with the following dedication, “I dedicate this work to the great Maestro Jos. Joachim, with the deepest respect.” Dvořák then visited Joachim in Berlin in April 1880, and once he returned home he completely rewrote the work. He once again sent this “new arrangement” to Joachim for inspection, but heard nothing for more than two years.

Dvořák finally received a detailed letter from Joachim in August 1882, in which the violinist proposed further changes concerning the solo part and the density of the orchestral setting. Dvořák agreed, and traveled to Berlin in September to play the work with Joachim. Seemingly, everything went well as Dvořák writes to Simrock, “I played the violin concerto with Joachim twice. He liked it very much… I was very glad that the matter has finally been sorted out. The issue of revision lay at Joachim’s door for a full two years!! He very kindly revised the violin part himself; I just have to change something in the Finale and refine the instrumentation in a number of places.” However, once Dvořák had finished the final revisions to the score in December 1882—almost four years after the initial commission—Joachim had lost interest. In fact, Joachim probably never played the work; he certainly was not involved in the premiere performance on 14 October 1883. The task of presenting the Dvořák violin concerto to the public fell on the young Czech violinist František Ondříček, who subsequently performed the work in concerts all over the world.