Opinion
What’s With the Concerti in Concerts?
by Chris Lloyd December 2nd, 2019

The Instrumental Concerto: pinnacle of music creation – for a soloist and conductor, the ultimate achievement on stage. The convergence of multiple elements in a perfect marriage of complexity, virtuosity, communication, and connection.

Except for those times it ends up resembling a size-measuring competition between two egos battling it out on stage. 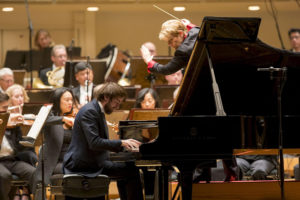 From experience, learning an instrumental concerto requires a great deal of preparation equal to or greater than that required for chamber music or solo repertoire. For the soloist, one needs to prepare the solo part immaculately, creating a musical narrative that fits one’s understanding of the work, whilst then also developing an intimate knowledge of the entire orchestral layout. It is paramount for the soloist to know when, and which instruments are playing at every moment in order to fully comprehend their role within the greater musical structure.

For the conductor, they have to deal with not only their concept of the entire orchestral work, but also the added unfamiliar face of the soloist entering their kingdom. Conductors often work closely with an orchestra to develop a deep rapport with their players; for those orchestras with a strong identity, it is possible then to consider them the instrument that the conductor performs with. If we accept this as a model, it is possible to view the conductor/soloist dynamic as a synergetic relationship akin to chamber music performance. And here is where the issue begins.

A good chamber ensemble (duo/trio/whatever) consists of musicians who have specifically chosen to make music together. Whilst it is possible to find examples in the professional world of musicians grouped together simply to maximise ticket-selling potential, for the most part, it seems chamber music is still performed by people who legitimately enjoy each other’s company – or at the very least, their musical company. As a result, the level of intimacy achieved by such ensembles can be rather intense –Tolstoy even wrote a novel (The Kreutzer Sonata) about it, where a husband justifies the murder of his wife by arguing her connection to her chamber music partner bordered far too close to adultery. Moving on from the fact that apparently Tolstoy was a horrendous misogynist, it is clear that the act of collaborative music-making can allow musicians to develop a very close and unique bond.

How much of a bond is possible then when soloists from all ends of the globe are flying around and engaging in the musical equivalent of a one-night stand? Typical preparation for a concerto performance rarely exceeds a handful of rehearsals (if more than a single ‘tutti’ rehearsal) before the performance, which barely leaves time for more than a brief run through of the entire piece, and – if lucky – an overall agreement on the shape of the work to be performed. Our professional musicians these days are so good, that they can bring together a work of excessive difficulty within a few short hours – but how deep this performance can be with such a shallow preparation is debatable. This is before even factoring in that the musicians who reach soloist and conducting levels are generally those with very strong views on how music should be played, meaning a lot relies on the serendipitous compatibility of two individuals. Without this, you simply have two different Beethovens performed on the same stage – or worse, a compromise where neither party is convinced by the result, whilst the audience sit there awkwardly like children watching their parents argue.

Further, what role do artistic managers and directors play in the coming together of conductor and soloist? For sure, a conductor would have a preference of who to perform with, but one can only imagine that in the maelstrom of clashing schedules, dates booked several years in advance, fees, unexpected cancellations, etc., that the ideal working scenario is probably less likely to occur on a frequent basis than we would hope for.

Is it any wonder then, that so many concerto performances leave us a little bit empty? We see these great names in concert together and book our tickets, hoping to hear a Bach, Rachmaninoff, Shostakovich that will change our lives and then… ‘oh that was a bit flat.’

And there lies the root of the issue. Being able to put two names on a bill is far more likely to convince audiences that any particular concert is worth attending. But is the inclusion of a concerto in every concert programme justified by artistic programming decisions alone? Or is it just an easy solution for keeping the orchestras playing and ensuring soloists are engaged enough without having to fill a Philharmonic hall with enough patrons to listen to a solo performance? Has our obsession with international competitions for upcoming artists led to a fetishization of the concerto as the final-round mark of success, leading us to valorise this method of music making above all else?

It is time artistic directors started asking themselves what the artists want. If it is to continue making cameo appearances with any number of orchestras, then great. But at least create a scenario where the best possible chance of great collaborative music-making is possible; be it through more rehearsal time, more collaborative programming, more performer selection power on behalf of the conductor. But if it is to create orchestral programmes that don’t simply tick off the generic programme formula (short piece, concerto, interval, hidden contemporary work, piece de resistance), even better: for if music is selected purely on decision making that has quality as its primary goal, surely we as audiences and performers will stand to benefit from all angles.