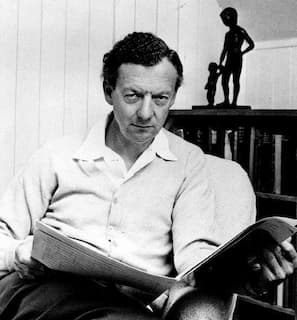 The performing arts venue Saddler’s Wells Theater is located in Clerkenwell, London. The present-day theatre is the sixth on the site since 1683, and when the venue reopened after World War II, it did so with the premiere of Benjamin Britten’s opera Peter Grimes on 7 June 1945. Company members had vigorously objected, as Joan Cross, the director of the company had cast herself in the leading role alongside Britten’s partner Peter Pears. 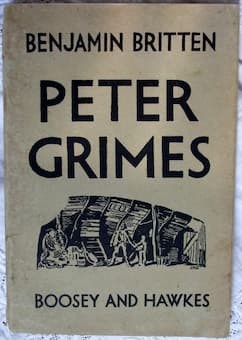 Officially, the complaints ranged from “supposed favoritism to the horrid cacophony of Britten’s score.” In the event, the premiere was a glowing success and hailed by the public and critics. In fact, Peter Grimes with a libretto by Mantagu Slater and based on the long narrative poem The Borough by George Crabbe, became one of the few opera from the mid-twentieth century to achieve repertory status in many theatres. It first played in the United States at Tanglewood in August 1946, and was first staged at the MET in 1948. 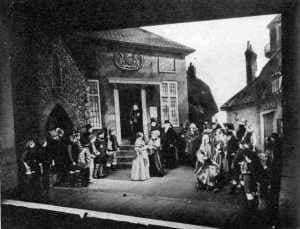 Peter Grimes is a rough and unsociable fisherman, who has antagonized a small town on the East Coast of England. His young apprentice died on a fishing trip when they ran out of drinking water, and the town blames Peter for the boy’s death. Peter is advised not to take on another apprentice unless he can get a woman to look after the boy. The solution would be to marry the widowed schoolmistress Mrs. Ellen Orford, one of the few people friendly to Peter. But Grimes is not ready to marry Ellen, even though he is in love with her. Ned Keene, the apothecary, knowing that Peter cannot handle his boat by himself, finally finds him a new boy from the workhouse. A violent storm washes away a cliff besides the old upturned boat from which Peter has made his orderly home. The new boy, trying to reach his master’s boat in the water, falls into the chasm where the cliff had been. When Peter returns from a trip and his apprentice is missing, the community, suspecting murder, sends out a posse. The retired merchant skipper Balstrode, who has supported Peter in the past, advises him to take his boat out to sea and sink with it, which Peter, nearly insane from grief and stress, proceeds to do. 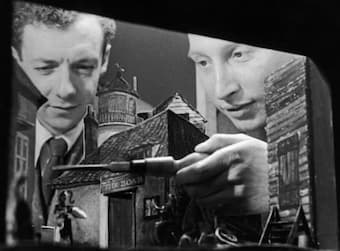 Putting Peter Grimes on stage was not as straightforward as it might have been. Initially, the story, scenario and the characters underwent substantial changes in the early stages of drafting. At first, Britten had Grimes murdering his apprentices rather than being at worst negligent, and Grimes originally goes mad in the marshes and dies there. There was even an episode involving smugglers, and a number of characters were eliminated as work progressed. Once Slater was engaged to turn the text into the libretto, “he wrote it in a four-beat, half-rhymed, simply-worded verse which expands at moments of heightened intensity into more formal verse-patterns and a richer vocabulary.” Slater further developed the characters with Grimes portrayed as “an ordinary, weak person who, being at odds with the society in which he finds himself, tries to overcome it and, in doing so, offends against the conventional code, is classed by society as a criminal, and destroyed.” We know that discussions between composer and librettist, revisions and corrections took nearly eighteen months, and that Britten wrote the music in just over a year. 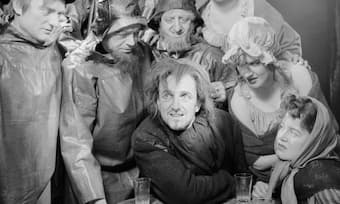 Peter Grimes has been described as “a powerful allegory of homosexual oppression,” with critics adding that the opera “is the composer’s own contemporary summation of a subject very close to his heart.” Scholar have argued that “Grimes the boy-killer is the homosexual outcast looking to Ellen Orford to effect his redemption, even his cure,” and that “Britten’s operas are preoccupied with the social experience of homosexuality.” Be that as it may, “the ambivalence of its subject matter, in particular the audience is left to decide whether or not Grimes is to be pitied rather than blamed, and the remarkable vitality of the music, come together to create an experience that rarely fails to grip in the theatre.” To accomplish the scene changes during the opera Britten wrote six orchestral interludes. Five of them have been published separately, and The Four Sea Interludes, Op. 33a presents the first, third, fifth and second interludes from the opera, with the titles “Dawn,” “Sunday Morning,” “Moonlight,” and “Storm.” A scholar writes, “Britten has always been praised for his ability to set a scene in orchestral preludes and interludes, but his skill at embodying character in and at times florid vocal style is even more memorable, and never more effective than in Grimes.”