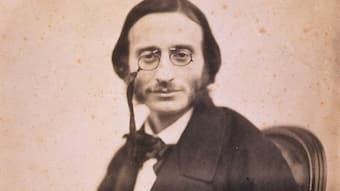 Medically speaking, gout is a form of inflammatory arthritis “characterized by recurrent attacks of a red, tender, hot and swollen joint, caused by deposition of monosodium urate monohydrate crystals.” Basically, this means that the patient has persistently elevated levels of uric acid in the blood, resulting from a combination of diet, other health problems, and genetic factors. The ailment was historically known as “the disease of kings” or “rich man’s disease,” and it tended to carry a mild moral stigma, as it “supposedly indicated that the patient habitually over-indulged in good living.” And while the disease is easily treated today, acute attacks of gout were rather common throughout the ages. A 17th-century physician writes, “the sufferer would wake in the night with such exquisite pain, that he could not bear the weight of the bed sheet or the jar of a person walking across the room. Fever, restlessness, dyspepsia, and irritability would follow… The condition of the patient would deteriorate over time, resulting in death from renal failure.” In the case of Jacques Offenbach, who died on 5 October 1880, the cause of death was established as heart failure brought on by acute gout. 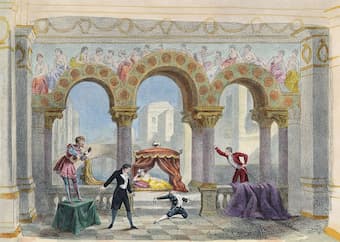 Giulietta act from the 1881 première of Les contes d’Hoffmann

Since Offenbach had a long-standing bad cough, which he tried to cure with frequent trips to various spas, doctors have suggested that he “also had a low-grade tuberculous condition of the lungs.” When Offenbach returned to Paris from a highly successful tour of the United States in 1876, giving a series of more than 40 concerts in New York and Philadelphia, he set to work on the score of the fantastic opera Les contes d’Hoffmann. He had first seen the play, written by Barbier and Michel Carré in 1851, and now an adaptation was handed to Offenbach by Barbier. The composer had a premonition that he would not see the work completed and staged, but he did attend some rehearsals. Already seriously ill, he was brought to the theatre in a wheelchair. Shortly before his death he wrote to a colleague, “Hurry up and stage my opera. I have not much time left, and my only wish is to attend the opening night.” In the event, he died on 5 October 1880, with the manuscript in his hand. 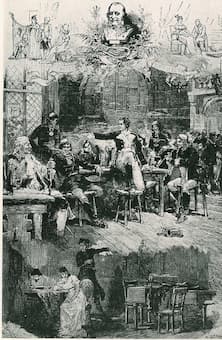 Les contes d’Hoffmann is based on three short stories by E. T. A. Hoffmann, who is also the main protagonist of the story. Set in Germany and Italy in the early 19th century, the Prologue finds the poet Hoffmann in a tavern near the opera house in Nuremberg. He is waiting for the opera singer Stella, who sent him a letter that she will join him after her performance finishes. However, Councilor Lindorf, who also loves Stella, steals the letter. While Hoffmann is waiting, he tells his friend Nicklaussee about his past lost loves. 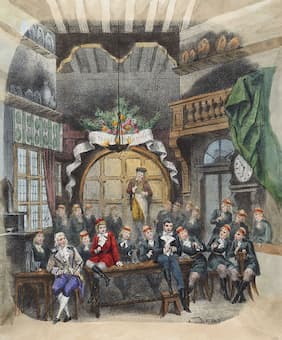 Olympia act from the 1881 première of Les contes d’Hoffmann

In Act I we meet Olympia, a life-sized mechanical doll. Invented by the mad scientists Spalanzani and Coppelius, they also sell Hoffmann a pair of magic glasses that lets him perceive Olympia as human, and he falls in love with her. One day, Coppelius gets angry and breaks the doll. Act 2 features the sickly singer Antonia, and her father forbids her to sing. Hoffmann falls in love with her, but then Dr. Miracle advises Antonia to sing, causing her death. In Act 3, Hoffmann falls in love with the courtesan Giulietta, and is convinced that she returns his affections. However, Giulietta seduced him under orders from Captain Dapertutto, who promises her a diamond if she steals Hoffmann’s reflection from a mirror. Once she succeeds in getting Hoffmann’s reflection, she immediately abandons the poet. The Epilogue returns us to the tavern in Nuremberg, and a drunk Hoffmann tells Stella to go away. As she departs with Lindorf, Nicklausse reveals that she is the Music reclaiming Hoffmann as a poet. “Everyone learns from love, and learns from tears.” 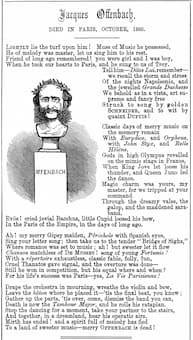 Elegy to Offenbach in the illustrated
English magazine, Punch.

Offenbach died four months before the premiere, after completing substantial portions of the piano score and orchestrating the prologue and first act. Offenbach’s son Auguste, with help from Ernest Guiraud, completed the work, and the premiere took place at the Opéra-Comique on 10 February 1881. That particular completion appears to have been far removed from the composer’s intentions as various manuscripts were subsequently discovered after World War II. These sources include rough drafts, outlines, and fair copies completed in Offenbach’s hand, as well as vocal parts made by his copyists. These discoveries led to the publication of a brand-new edition, and additional discoveries with a newly paired emphasis on authenticity spawned further revisions of the musical text. The musical world was led to believe that the 1992 edition by Michael Kaye, first performed at the L.A. Opera, would be the definitive text. However, additional authentic music was discovered and published in 1999. Finally, in 2011, two competing publishing companies, in France and Germany, respectively, decided to “release a joint edition reflecting and reconciling the research of recent decades.” Only time will tell if this definitive edition of Les contes d’Hoffmann will need to undergo further revisions and changes in the future.