Between 1875 and the 1840s, if you bought a packet of cigarettes, it came with a cigarette card. This little trading card served two purposes: it stiffened the paper packets of cigarettes so they wouldn’t crush, and it served as advertising for the maker’s product.

And, of course, as in the words of Pokémon, gotta get ‘em all! The cards were images to collect and trade with others. The variety of images on cigarette cards cannot be understated. Topics such as actors, costumes, jokes, and sports figures are just the tip of the iceberg in what was depicted.

The fad started in the US in 1875, with the Allen & Ginter tobacco company. It travelled to the UK by 1887 but it wasn’t until the John Player & Sons tobacco company got involved in 1893 that the whole idea of sets and collectibles took over smokers’ imagination. The most expensive cigarette card to come to auction was the rare American baseball card for Honus Wagner, who played for the Pittsburgh Pirates. He objected to his name and face being used for advertising without his permission and most cards were destroyed. The few that remain are highly prized with the last one to come to auction selling for over 3 million dollars.

Now, these images serve as reference sets for historians looking at fashion, styles, and even societal norms.

For musicians, there were several music sets, but we will look at a set issued by W. Duke and Sons. Based in Durham, North Carolina, the W. Duke and Sons company used the North Carolina agricultural product of tobacco to move into business and cemented its position as the largest cigarette manufacturer in the US by replacing the time-consuming hand production of cigarettes with their innovative use of a cigarette-producing machine, In the 1880s, workers produced 3 cigarettes a minute. In the 1980s, one machine could produce 7,000 a minute.

In 1888, Duke produced a set of 50 cards on Musical Instruments. From A (Accordion) to Z (Zither), the cards featured women playing musical instruments. Their dress gives some indication of their social status.


The bugle, drums, and the fife for the 19th-century military and the Herald’s trumpet and the bagpipe for a foreign military. The Fife player is dressed in a Zoave uniform, popular during the American civil war. 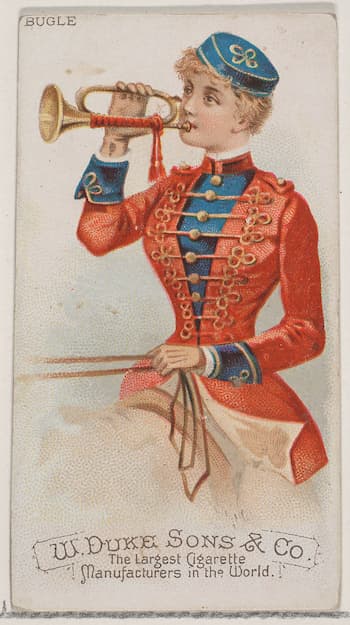 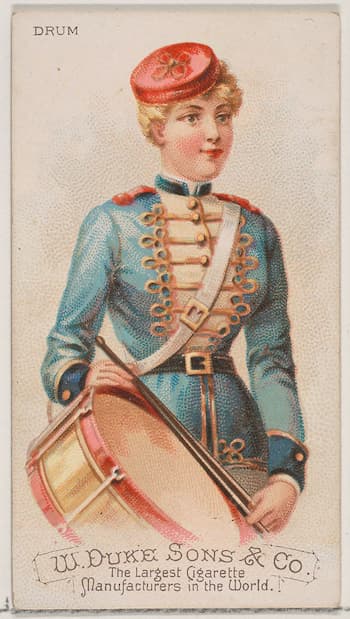 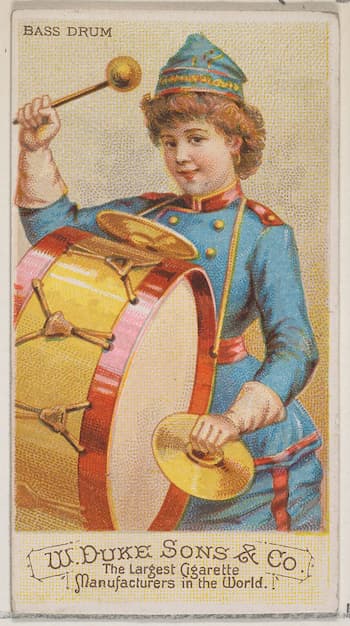 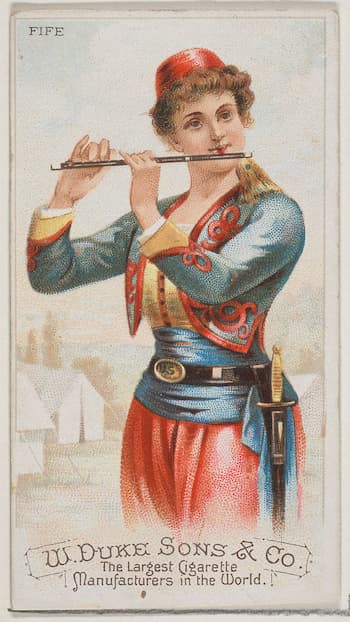 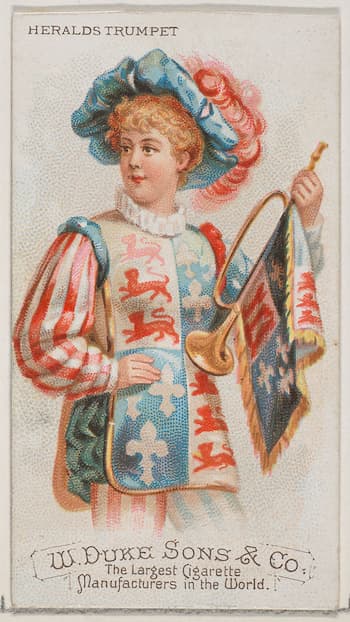 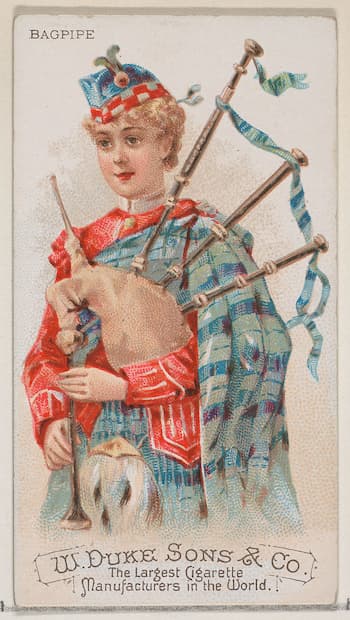 To show instruments from the vaudeville stage, two black women are shown playing the banjo and the bones. 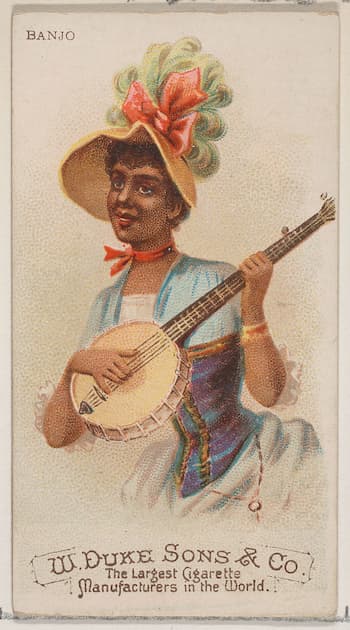 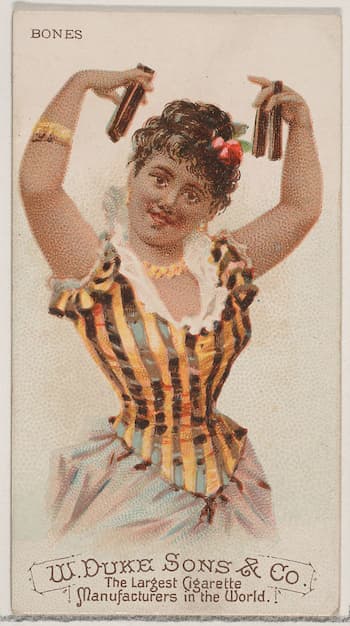 Exotic elsewhere with costumes to match, were used for instruments such as the castanets, the Egyptian harp, the hand organ, the guitar, the hurdy gurdy, the Jews harp, the mandolin, and the ‘seimseim’, i.e. the Japanese shamisen, the tam tam and the zither. 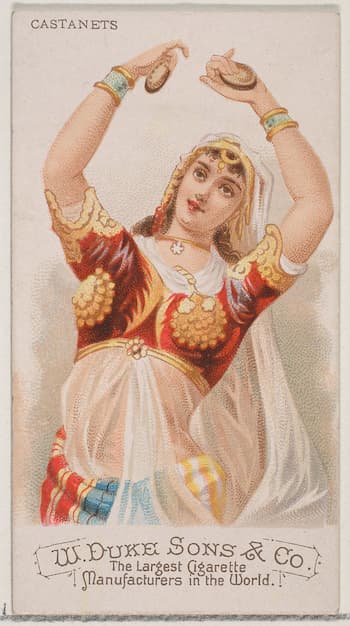 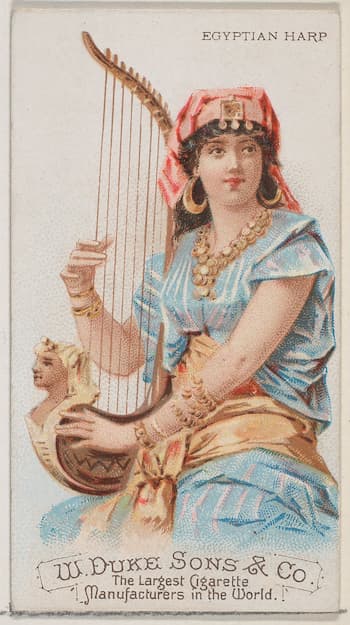 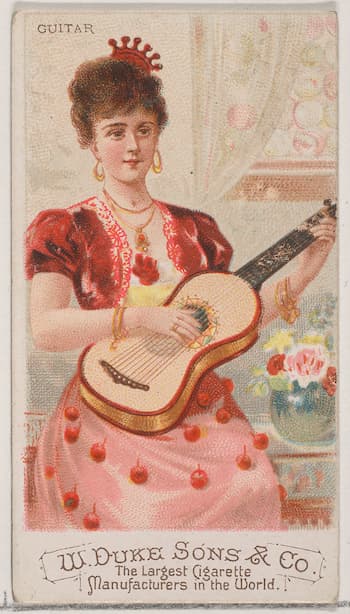 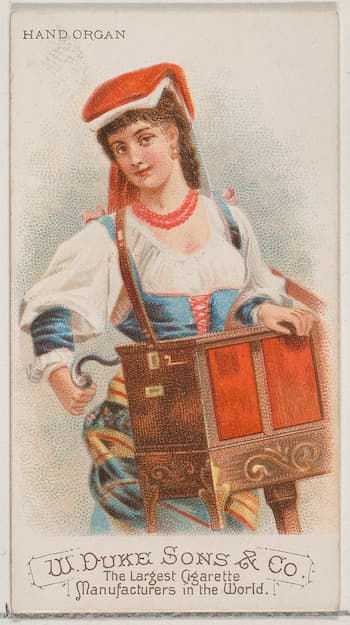 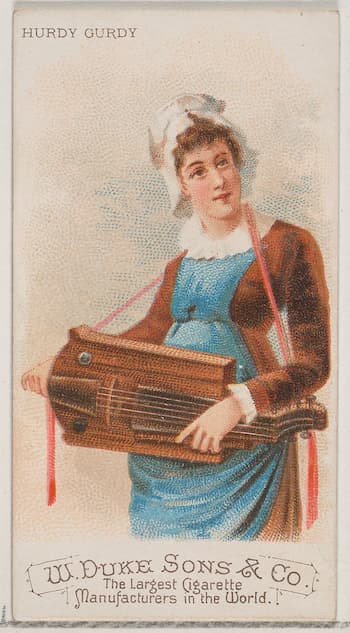 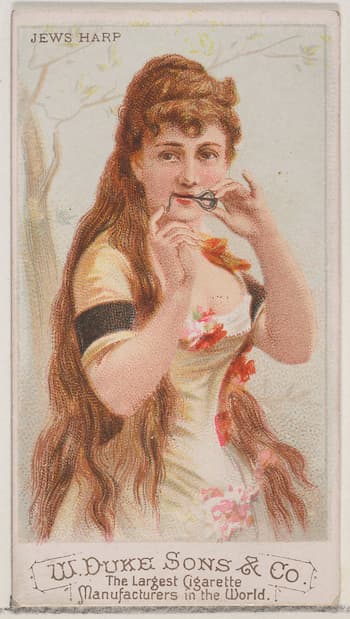 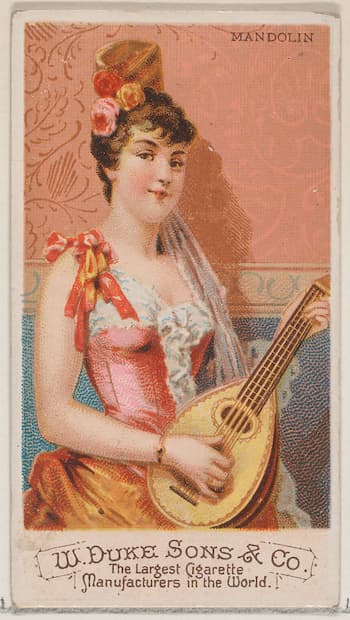 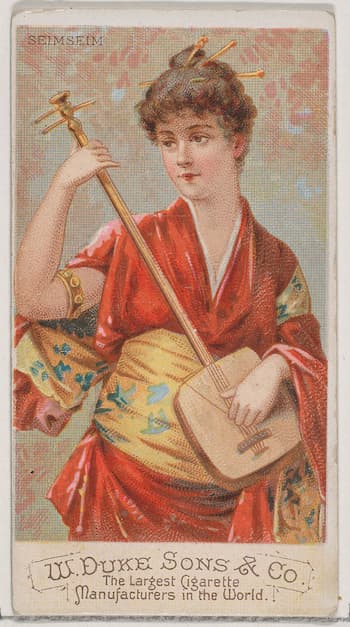 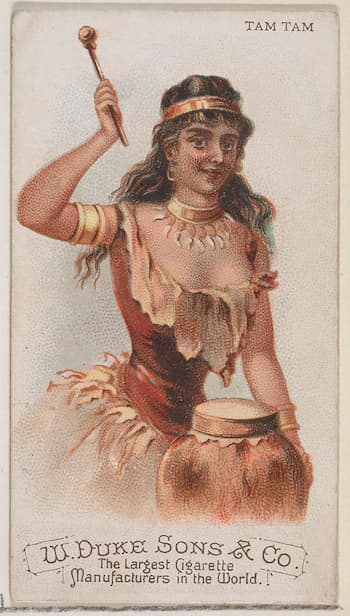 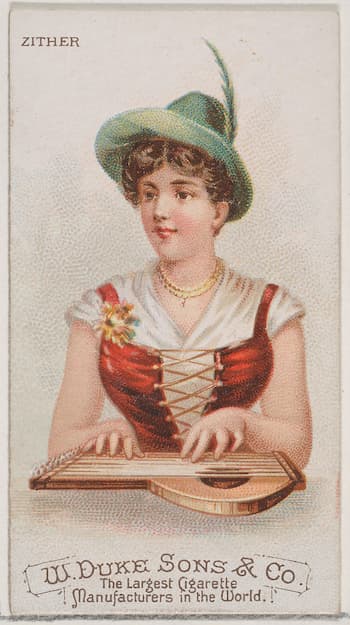 Ancient instruments such as the lyre, the lute, bass viol, and the Roman horn (or buccina) were depicted, with only approximations of what they might have looked like: the bass viol should have been played seated, the neck on the lute is too long, the lyre looks like one from an illustration rather than one that could be played, and the Roman horn is too small. 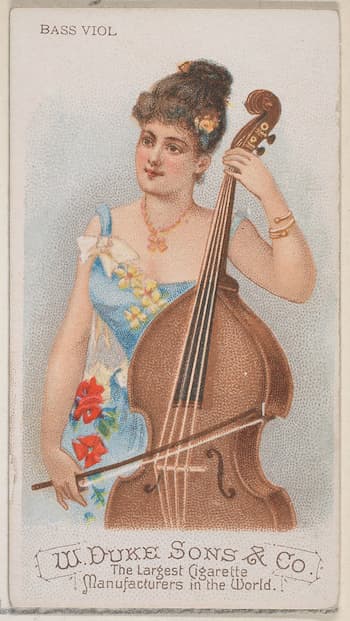 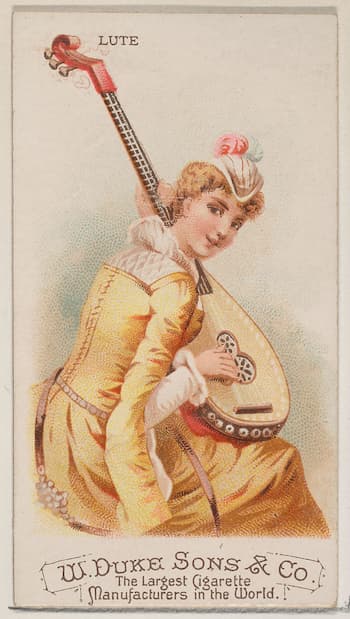 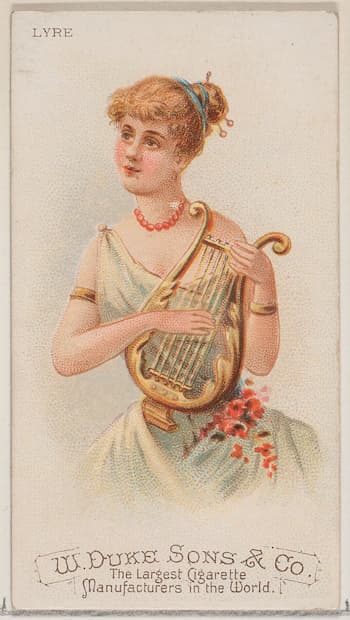 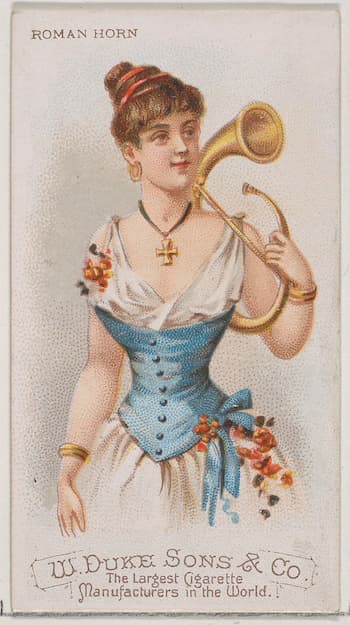 Regular instruments, starting with the accordion and bassoon, the clarinet and the cornet, and the tuba and the violin were also shown, but the performers are dressed with high necklines, jewelry, and sometimes gloves to show their status. 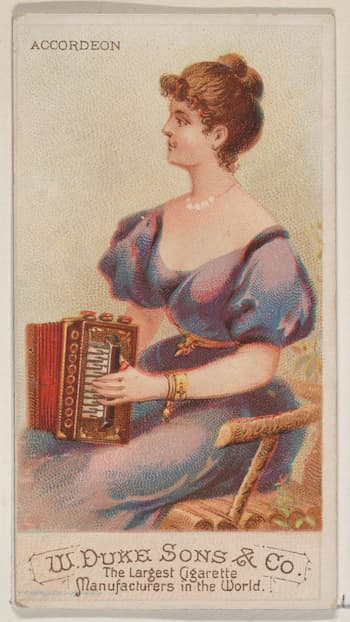 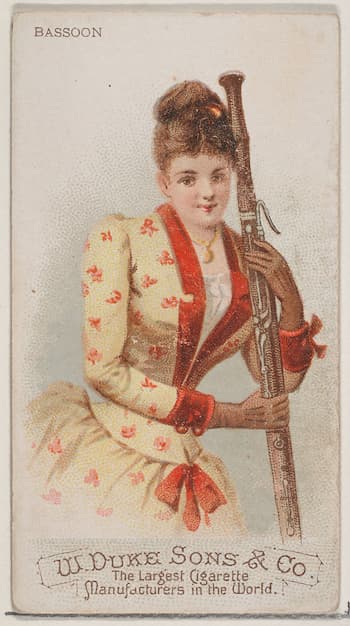 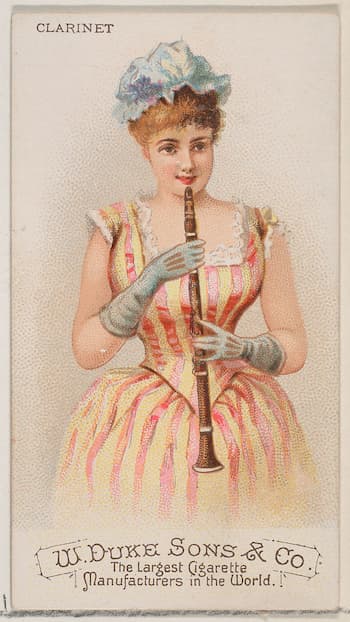 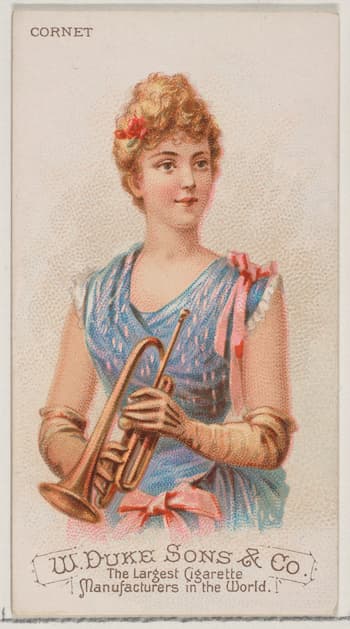 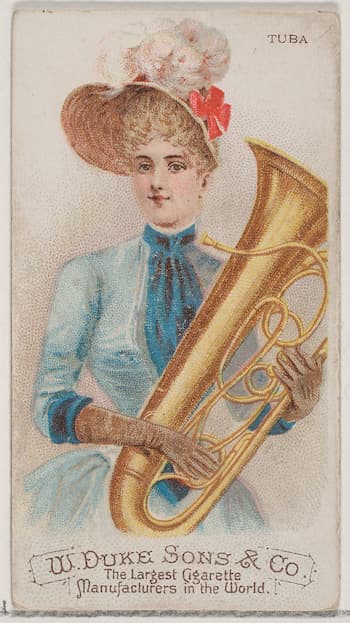 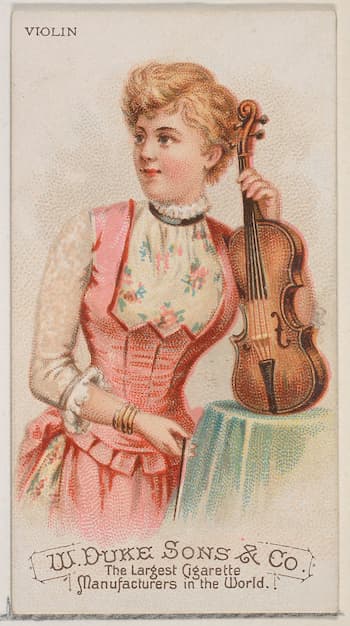 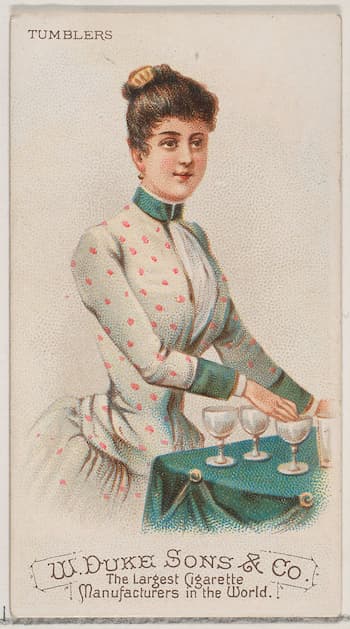 These aren’t all the cards, but give an idea of how they were used to show that women could do anything, but that some instruments seemed to require special clothing!

Cigarette cards died out during WWII when paper was in short supply and never quite returned although several tobacco companies have tried to revive them in the 21st century.