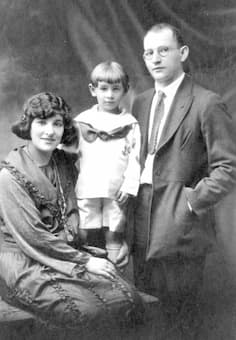 At the insistence of his grandmother, Leonard Bernstein was born Louis Bernstein in Lawrence Massachusetts on 25 August 1918. His parents, Jennie (née Resnick) and Samuel Joseph Bernstein, always called him Leonard, and to his friends and many others he was simply known as “Lenny.” Lenny legally changed his name to Leonard when he was sixteen, shortly after his grandmother’s death. 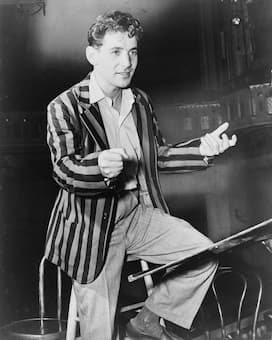 Both of his parents had independently immigrated to the United States from Rovno—currently located in the Ukraine—and his father supported himself by cleaning fish while he went to night school to learn English. Eventually he found a job in a beauty-parlor supply business, and within a very few years, he was on his way to becoming a successful businessman. “The Samuel Bernstein Hair and Beauty Supply Company” held the New England franchise for “Fredericks Permanent Wave Machine,” a contraption that sold exceedingly well. It was only natural that Samuel was determined that his first-born son would eventually take over the business. Initially, Samuel wasn’t disturbed by his son’s early love of music; after all “it would turn out to be a nice hobby one day.” 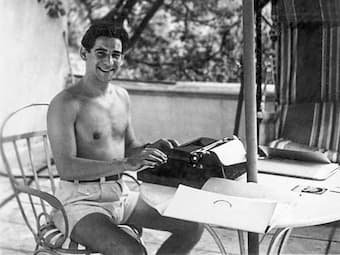 When Lenny reached the age of ten, his aunty deposited her upright piano at the Bernstein household. Immediately fascinated, Lenny took his first piano lessons with a number of local piano teachers, but eventually ended up with Helen Coates, assistant to the finest piano teacher in Boston, Heinrich Gebhard. He studied with Coates and eventually Gebhard for seven years. Samuel attempted to discourage his son’s interest in music by refusing to pay for his piano lessons. As Lenny’s younger sister Shirley writes, “Lenny started to give lessons to the young people in his neighborhood, and he worked Saturday nights in a high school jazz band to get the money for his lessons. Impressed by the passion of his son’s resolve, Samuel restored the allowance, and continued to pay for the lessons.” During a special evening program given by the brotherhood of the synagogue, “Lenny played a piece of his own. He took a well-known theme sung by the choir during services, and played it in the manner of three famous composers, Chopin, Liszt and Gershwin. His performance was a big hit.” 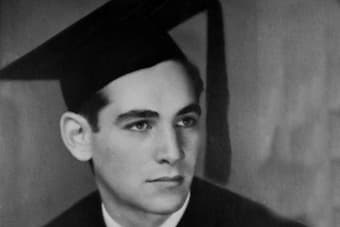 With his father’s blessing, Lenny was allowed to major in music at Harvard, and he had the good fortune of meeting major musical figures. His teachers included E.B. Hill, A(rthur) Tillman Merritt, and Walter Piston. Bernstein augmented his fine academic training through extracurricular activities. He wrote incidental music for productions of two plays by Aristophanes and organized a performance of Marc Blitzstein’s The Cradle Will Rock attended by the impressed composer. Bernstein also met and was befriended by Dimitri Mitropoulos and Aaron Copland. His sister reports “that Lenny almost got into real scholastic trouble during his senior year. Busy with writing his thesis and with many extracurricular activities, he had severely neglected a political science course. He had to study the entire course almost from scratch the night before the final exam, and with the help of some caffeine pills managed to pass the exam with flying colors.” His first extant composition, Psalm 148 for voice and piano dates from 1935, and his final year thesis was titled “The Absorption of Race Elements into American Music.” 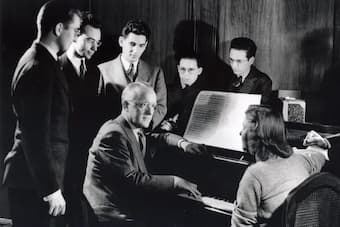 After a short period in New York, Lenny was accepted at the Curtis Institute of Music in Philadelphia to study conducting with Fritz Reiner, piano with Isabelle Vengerova, orchestration with Randall Thompson, counterpoint with Richard Stöhr, and score reading with Renée Longy Miquelle. Apparently, he was terrified of Madame Vengerova, a brilliant teacher and stern disciplinarian. Although “his fear eventually subsided, he would continue to call her affectionately “Tirana,” the feminine form of the Russian word for tyrant.” A delightful anecdote tells that once “when Lenny was conducting the Philharmonic, Vengerova came to a rehearsal to listen to him conduct a Mozart concerto from the piano. After the rehearsal she sternly told him, ‘if your orchestra played like that, you would leave the stage.’ After a lengthy working session on the concerto, the performance became a resounding success.” 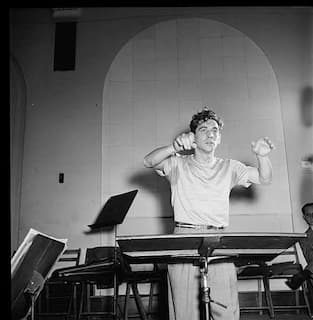 In addition, his conducting work with Fritz Reiner decisively shaped his approach to music. Reiner was a stern taskmaster, “demanding of his student that he pursue perfection of technique and complete knowledge of the matter at hand.” Lenny frequently cited the first rule of being a conductor he learned from Reiner, “Don’t go near the podium unless you know every note of the piece you’re going to conduct.” Shirley Bernstein writes, “When I am at one of Lenny’s concerts, I see a double image. One the conductor of the New York Philharmonic but also a 15-year-old boy, breathlessly playing and singing at the piano with blazing innocence, a tender dedication, aware of no other world at those moments than the one of his own making.”