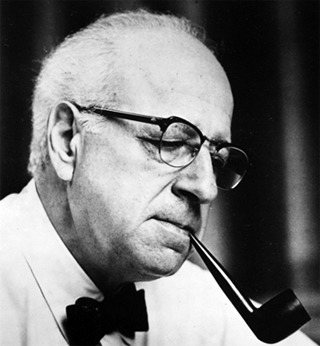 Born in Rockland, Maine, Piston and his family moved to Boston in 1904. He exhibited musical talent at a young age, and could play the violin and piano with self-taught proficiency.

While studying architecture at the Massachusetts Normal Art School, Piston performed in cafés and theatres to earn an income. During World War I, he joined the U.S. Navy band as a saxophonist, and learned to play most of the wind instruments himself.

In 1926, Piston returned to the US and was appointed to the music faculty of Harvard, where he remained to teach, write and compose until 1960. Throughout the years, Piston enjoyed a fabulous relationship with several American orchestras, most notably the Boston Symphony under Serge Koussevitsky, Charles Munch, and Erich Leinsdorf.

Being an ultimate musical craftsman, the works of Piston were sophisticated and technically assured, with quintessential neo-classic qualities of clarity and proportion. As Gerard Schwarz says of him, “…it’s clear that he is not dull or academic, but incredibly imaginative and innovative. He was a master, an inspired composer.” During his lifetime, Piston received two Pulitzer Prizes for his Symphonies Nos. 3 and 7, as well as three New York Music Critic’s Circle Awards for his Symphony No. 2, Viola Concerto, and String Quartet No. 5. The Incredible Flutist, his only ballet score, had been a long-time favourite to the audience. His four books on music techniques and theory, namely Principles of Harmonic Analysis, Counterpoint, Orchestration and Harmony, are still considered to be classics today.

Prelude and Allegro for Organ and Strings (1943)