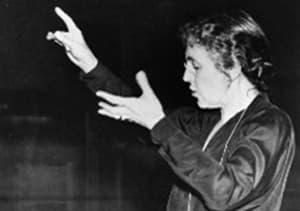 A scholar and former student writes, “To measure the potency of Nadia Boulanger’s influence is impossible. As a tree is rooted firmly to the earth, she was rooted in the history and grammar of Western music. She was gifted with genius, grew with unmatched stability and branched out to hundreds directly and to thousands in sympathetic manner.” Nadia Boulanger, born on 16 September 1887 in Paris was a true musical polymath and she remains of incalculable importance to 20th-century composition, scholarship and performance. Boulanger seemed predestined for greatness, as the musical credentials of her ancestral family were truly astounding. Her grandfather Frédéric Boulanger was born in 1778, and after spending some time in Dresden settled in Paris. He entered the National Conservatory at an early age and won the “First Prize” in Cello at the age of nineteen. He married Marie-Julie Hallinger, who received her “First Prize” in voice and had a long career with the Opéra Comique in Paris. Nadia’s father Henri-Alexandre Ernest Boulanger was born in 1815 and he received the “Grand Prix de Rome” for his work Achille. After spending time at the Villa Medici in Rome, Ernest returned to France and “rose to fame in the Parisian world of music. His early operas were all performed and well received by the middle of the century.” 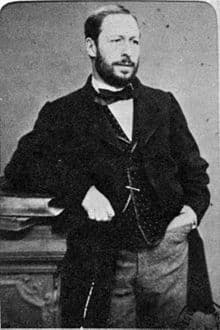 While Ernest was criticized by his contemporaries for “writing over-simplified music with little contrast,” Nadia considered him a good musician, “who wrote music of his time, not of the future.” Ernest held a teaching appointment at the National Conservatory, and at the age of 62 he fell in love with an 18-year-old Russian woman who had come from St. Petersburg to study voice. That young woman turned out to be Princess Raissa Mychetskaya who had decided to devote her life to music. Nadia said of her mother, “She was really an amateur, never being a part of the teaching and performing world, but she was a true artist. She could listen, see, and understand the nature of things. She married young in the atmosphere of the Russian world and was emphatic about what was proper, in a way more so than even the French.” On her father’s 72nd birthday, and on the tenth anniversary of the Boulanger wedding, Nadia was born. Initially, Nadia did not like music at all and found it annoying. Supposedly, “her sensitive ears would cause her to hide under the piano and moan when she heard music.” 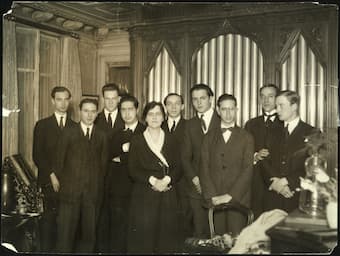 Nadia Boulanger and her class in Paris, 1923

Nadia later told the story that she experienced an extraordinary moment at the age of three. “A fire siren was sounding outside the apartment. She immediately went to the piano and tried to find the same pitch. She found the pitch and so discovered music. She admitted that she never left music after that time.” Nadia initially studied with her father, and at age eight, “she could read all the clefs, transpose, and play quite well.” In preparation for her Conservatoire entrance, Nadia studied piano, cello, and organ, even though she could not reach the pedals. She entered the Conservatoire at the age of nine as a student of Solfége, and within a couple of years “her musical interests and score reading had developed so well that she was studying organ with Alexandre Guilmant, piano accompanying with Paul Vidal, and harmony with Auguste Chapuis.” Not to be outdone, she studied privately with Fauré, Vierne and others. Ernest Boulanger died on 14 April, and money became a problem as “Raissa had an extravagant lifestyle, and the royalties she received from performances of Ernest’s music were insufficient to live on permanently.” At that time, Nadia was determined to become a teacher in order to be able to contribute financially to her family. 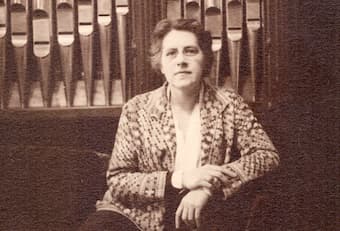 Nadia was deeply absorbed in her musical studies, and in July 1904, “she set the remarkable record of obtaining three First Prizes within four days in composition, piano accompaniment, and organ.” By the age of 16, she had obtained every “First Prize” in her studies. After graduation, Nadia started to teach privately from the family apartment, and held a Wednesday afternoon group class in analysis and sight singing. In addition, she dedicated herself to composition in hopes of winning the Grand Prix de Rome, as her father had done. A scholar writes, “her musical language is often highly chromatic though always tonally based, and Debussy’s influence is apparent in her fondness for modally-inflected melodic lines and parallel chordal progressions.” Boulanger submitted her first work in 1906 but failed to make it past the first round. One year later she progressed to the final round but again failed to win. Boulanger tried again in 1908 and 1909 without success. The Prix de Rome in 1913 was awarded to a Boulanger; however, it was won by her sister Lili, the first woman to do so. Nadia voluntarily stopped composing in her mid-30s, telling her teacher Gabriel Fauré, “If there is one thing of which I am certain, it is that I wrote useless music.” This harsh self-assessment seems entirely unfounded, and critics and scholars still suggest, “that there is much to regret in the self-imposed brevity of her composing career.”