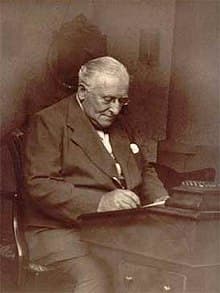 He was proclaimed “Britain’s greatest living composer” in the Performing Right Gazette of 1929. That assessment was based on the overall number of performances of his works, and his apparent popularity caused a good deal of professional jealousy. 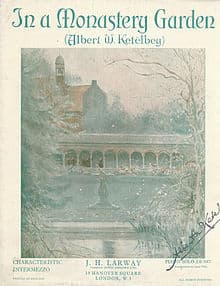 In a Monastery Garden

Today, he is considered the poster child of oriental musical kitsch who wrote pleasant melodies enhances by his undeniable abilities as an orchestrator. You might have guessed already that I am referring to Birmingham-born Albert Ketèlbey (1875-1959). He composed hundreds of pieces for light orchestras and bands, and his series of exotic mood pictures made him Britain’s first millionaire composer. It all kicked off with the orchestral work In a Monastery Garden, which was published as a piano piece and also in full orchestral form. It became known all over the world, and by 1920 over a million copies of the sheet music had been sold. 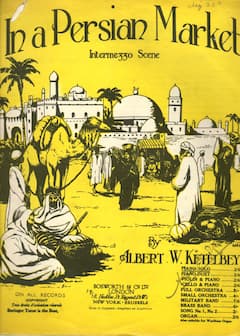 In a Persian Market

In 1919 Ketèlbey followed up this worldwide success with “In a Persian Market,” which immediately became another hit. Although hugely popular with audiences, critics were quick to point out its musical and aesthetic shortcomings. It was described as “reprehensibly demeaning or delightfully tacky,” and the composer and conductor Nicolas Slonimsky saw it as an “immaculate conception of imperialistic colonial England. The composer’s intention is to convince the listener that all’s well in the colonies where beautiful women and exotic fruits mature together, where beggars and rulers are friends, where there are no imperialists, no restive proletarians.” A critic in The Musical Times called it “naïve and inexpensive pseudo-orientalism,” and when Ketèlbey objected, the critic responded, “In a Persian Market is bad music, without skill or convincing quality of any kind.” 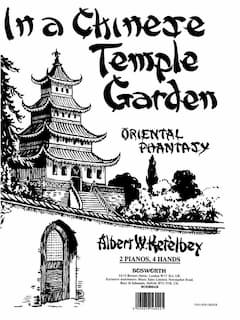 In a Chinese Temple Garden

However, there was no denying that Ketèlbey’s music flew off the shelves, and his 1923 In a Chinese Temple Garden, subtitled “Oriental Phantasy” focused on exotic sound effects including the generous use of the gong and cymbals. The composer himself provided a brief synopsis of his work, writing, “’After a few bars characteristic introduction, – The incantation of the priests in the Temple; the perfume of incense floats on the air; a melody represents two lovers; a Manchu wedding procession passes noisily by, a street disturbance ensues amongst the coolies—founded on an actual Chinese scale—the beating of the gong in the Temple restores quietude, the incantation of the priests is heard again, and the lovers’ song (amongst the singing of birds) with a brief quotation from the Temple and Coolies music brings the piece to it’s conclusion.” Despite the naiveté of the scenario and its subsequent shallow musical portrayal, it is worth remembering that these topographical mood pictures and genre pieces essentially were conceived as accompaniments to silent films. 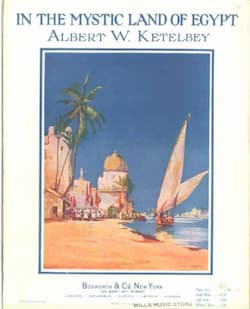 In the Mystic Land of Egypt

Modeled after In a Persian Market and In a Chinese Temple Garden, Ketèlbey composed his In the Mystic Land of Egypt in 1931. Originally scored for orchestra and optional voices, it was published in versions for piano in the same year. Once again, Ketèlbey targeted the amateur pianist market. These pieces of moderate difficulty display simplicity of structure, and he uses attractive harmonies to enhance the overall appeal of his charming melodies. A synopsis provided by the composer reads, “Native soldiers pass through a village, followed by a soft song from a boat on the Nile. An Arab plays on a pipe, then the song is repeated by the orchestra, finally also by the returning soldiers.” If you are looking for any sense of cultural, social and/or musical authenticity, you will be sorely disappointed. It never was, nor ever pretended to be, more than a highly-popular form of light topical entertainment in which “the listener becomes the beneficiary of a riot of imagination.”