In Tune Society
Three Dynasties Make One Orchestra
by Rudolph Tang May 6th, 2019 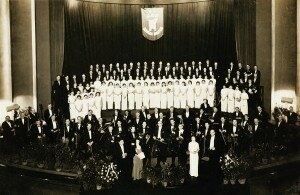 On April 24 2019, Xavier Bouvier visited Shanghai and made headlines. A professor of composition at the Haute École de Musique de Genève, he donated a sketch to the Shanghai Symphony Orchestra. He’d purchased the sketch at an auction in mid-March in Normandy, France. Nothing is known about the painter, but it’s the painter’s subject that captured Bouvier’s attention.

Titled Jean Remusat: flautist, composer and leader of the Public Band of Shanghai, the sketch is the only surviving image of Jean Remusat (1815-1880) who went to Shanghai around 1865 and who founded the Shanghai Philharmonic Society. Later, he was summoned by the foreign powers running the concessions to form the Public Band to entertain the western settlers.

Ma: Suiyuan Suite, “Inner Mongolia Suite”, Op. 9: II. Nostalgia (arr. Kejian A for violin and orchestra)
Lu, Si-Qing; Shanghai Symphony Orchestra; Chen, Xie-yang
Comprising some 20 players, most of them Filipinos, the Public Band was the antecedent to the Shanghai Symphony Orchestra. Its debut concert, as advertised in the English newspaper North China Daily News on January 8 1879, was to be held on January 16, led by Jean Remusat at the Lyceum Theatre. This date is recognized as the starting point of the orchestra’s adventure through three dynasties: the Qing, Nationalist China, and the People’s Republic of China.

Dun: The Banquet (Theme). SSO: Tan Dun, cond.
But as distant and hazy as the sketch is, the documented history of the SSO is equally vague and blurred when it comes to tracking what happened in the era prior to the end of the Cultural Revolution in 1976. The SSO’s archive suffered losses as a result of political movements that sometimes demand the transfer of materials deemed degenerate, compounded by office moves. Few of its recordings before the 1950s are preserved, for example, even when the recording industry in town was at its height. The lack of earliest concert programmes and a company charter leaves doubts, and inevitably welcomes a challenger. 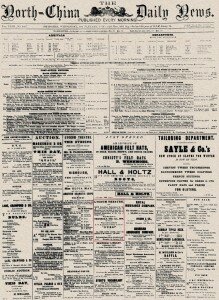 Like Shanghai, Harbin, the capital city of Heilongjiang Province, was a favourite destination by foreign settlers at fin de siècle, the majority of them coming from Russia and Belarus. In April 1908, Harbin Symphony Orchestra was founded by Russian musicians working in China as part of the railway administration. Though orchestral music was regularly performed by the expanded Public Band in Shanghai in the 1900s and 1910s, it wasn’t until February 1922 that the band was granted orchestra status. Both Harbin and Shanghai claim to have the oldest orchestra in China.

Whichever city is correct, Shanghai Symphony Orchestra prevails and thrives. It has performed under at least seven names and different administrations during the foreign concession, Nationalist China, the pseudo-Nationalist government, the Japanese occupation, the transitional military authority, the revolutionary committee, and, finally, the people’s government. In 1991, the orchestra had the honour of being the only orchestra from China performing at Carnegie Hall’s centenary. It was the first orchestra from China to record for Deutsche Grammophon after its historical debut at the Lucerne Festival conducted by the music director Long Yu on its 2017 tour. That tour was also the occasion of a reunion with enthusiastic descendants of European musicians once employed or engaged by the orchestra in its previous incarnations. The musicians had made enormous contribution to the establishment. Their descendants continued the tradition by donating family collections of house programmes, old photos and memorabilia, reminding people of the humble origin and noble undertaking of the Shanghai Symphony Orchestra.